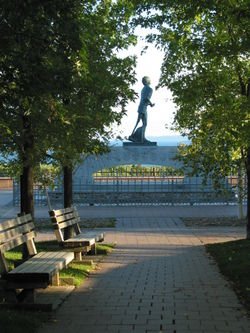 A scenic overlook on the eastern outskirts of Thunder Bay is dedicated to Canadian icon Terry Fox, who was forced by the onset of cancer to end his courageous cross-Canada run a few miles from here in 1980.

When I chat with Thunder Bay visitors about their favourite day trips, one spot consistently ranks high–the impressive Terry Fox Scenic Lookout at the northeast entrance to the city.

No matter what country people come from, they want to see the statue of the legendary one-legged Canadian runner Terry Fox, take their pictures alongside him, and reflect on the Canadian hero and his inspiring story of courage and determination to run across Canada. But the scenic lookout also delivers one of the region’s best unobstructed panoramic views of Lake Superior, nearby islands, the iconic Sleeping Giant (one of the Seven Wonders of Canada), and the forested shoreline.

You can’t miss the statue from the Terry Fox Courage Highway, a 52-mile section of the Trans-Canada Highway between Thunder Bay and Nipigon named in his honor. The massive, nine-foot bronze sculpture towers on a high rock cliff overlooking Lake Superior.

What you don’t see until you drive up to the site is the intimate park setting that surrounds the statue. Plenty of picnic tables are available for a leisurely sit-down lunch. Tree-lined, barrier-free paved pathways wind around the mini-park, and there are sitting benches to pause and take in the sweeping vista. A visitor centre (with wheelchair accessible washrooms) is open every day of the year except Christmas Day, Boxing Day and New Year’s Day. During the summer, an average of 600 to 1,200 people stop at the lookout daily.

It is hard to believe 28 years have passed since the 21-year-old Terry inspired Canada, and then the world, with his dream of a Marathon of Hope cross-Canada run to raise money for cancer research. He had lost his right leg to cancer at age 18. On a cold misty April 12, 1980, he dipped his artificial leg into the Atlantic Ocean and started the 5,300-mile run across Canada.

Running an incredible average of 26 miles a day, he arrived in Ontario in June. Most of us followed his progress and were familiar with Terry’s unique walk-hop-walk run-gait shown on the TV news. By August 12, he had raised over $11 million. I can still remember the great excitement as he passed through Nipigon and was heading down the highway towards Thunder Bay. But on September 1, on a highway stretch seven miles northeast of today’s lookout, Terry was suddenly rushed to a Thunder Bay hospital after running 3,339 miles in 143 days.

The next day he held a news conference announcing for his run was on hold, because the cancer had appeared in his lungs and he was returning home for treatment. But he still held high the dream.

Terry lived to see his dream come true – his Marathon of Hope reached its goal of one dollar for each Canadian in February, 1981, raising $24.1 million (Canada’s population at the time). Five months later, on June 28, 1981, Terry died with his family by his side. 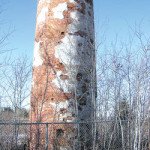 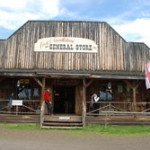