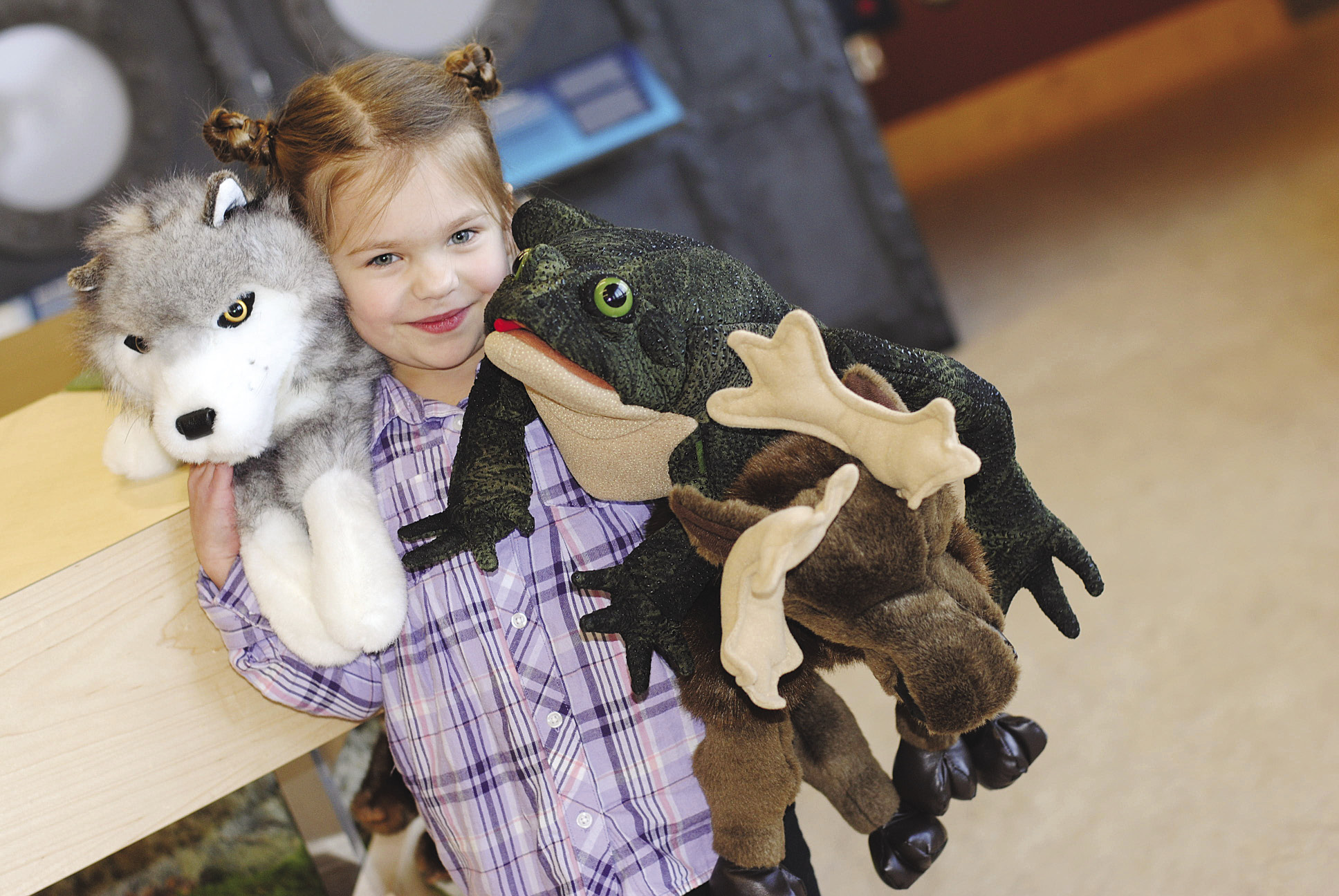 The Boreal Forest exhibit includes puppets and books for the kids to enjoy. |SUBMITTED

RED ROCK—Located 90 kilometers east of Thunder Bay, the township of Red Rock is nestled between the red cliffs of Red Rock Mountain and the shore of Lake Superior. Its serene beauty is matched by the kindness of its sincere inhabitants. The small town has a large, welcoming presence, made all the more so by the newly opened Marina Interpretative Centre. There are nine exciting exhibits and each one offers an interactive and unique understanding of Red Rock and the surrounding area.

It begins with the exhibit of Camp R, a prisoner of war camp. Britain needed their captured Nazis and German citizens out of the country, and sent some of them to Red Rock during World War II. Various aspects of the camp’s life are explained through four slideshow vignettes and old fashioned telephone receivers.

To truly understand Red Rock’s origins, the exhibit on the pulp and paper mill is a must. It operated from the 1940’s to 2006, and produced high quality paper. The mill not only employed people, they provided housing and medical services, built the school and auditorium, and had a large role in the sports and entertainment of the community. The exhibit explains how the mill operated and the role of the forest industry not only in Red Rock, but the entire region.

The town alcove exhibit has 10 short recordings of people from the community. The participants talk about the first families to settle in the area, such as; what it was like to live and work in a town that was dependent on a mill for its economic well-being; the challenges faced by the residents when the mill closed down eight years ago; and how through the determined efforts of the town’s people, Red Rock transformed itself into an amazing tourist destination by developing its waterfront into a scenic park, full-service marina and eco-friendly centre that contains the exhibits.

The community’s name is derived from the striking red rocks that form its breathtaking backdrop. This unusual formation is called a cuesta. A touch screen shows visitors how they were formed in the natural world. Another touch screen, called the splash table, provides information on various species of fish that can be found in the region.

A simulated four-seat submarine lets people experience what it would be like to descend into Lake Superior’s mysterious depths. Done through animation, it shows animals, plants, even a shipwreck in the National Marine Conservation Area.

Along the windows there are four stations with peep pipes directing visitors to must-see sites around the marina. An incredible view of Red Rock and the bay can be found at Lloyd’s Lookout. Pictographs, painted long ago by First Nation people, are located across the bay. In a nearby rock face, when the light is shining just right, people can see a water vessel. Some say it is a voyager canoe, while others believe it is a Viking ship. Lastly, there is Nipigon Bay, which plays a vital role in the town’s existence.

The final exhibit has four large screens that puts everything Red Rock was and is evolving to become, in a visual context for its visitors.

At the conclusion of the exhibits, visitors can check out the gift shop. They can even purchase rocks from the cuesta, all of which were carefully collected so not to harm the environment. A fully-licensed restaurant serves delicious food and seats 35 inside and 15 outside.

Cook County has an app for that