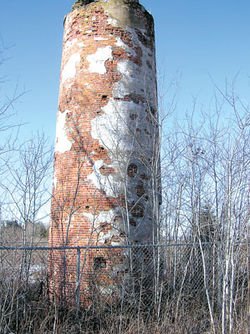 The red brick tower is all that remains of the original Minnesota Point Light, which was constructed in 1856

If you are looking for an interesting walk that will take you back in history, drive to the end of Duluth’s Park Point and hike about two miles to the site of the old Minnesota Point Lighthouse. It doesn’t look like much today, but the dilapidated tower was the first high-powered lighthouse on Lake Superior.

In 1823, Lt. H. W. Bayfield of the British Navy began the first survey of Lake Superior. He designated a spot on Minnesota Point as “zero point” for the lake wide survey. The Superior Entry was the original passage through Minnesota Point, the longest freshwater sand bar in the world, to the protected waters of Superior Bay. With the completion of the locks at Sault Ste. Marie in 1855, thoughts and dreams of increased boat traffic to Superior Bay necessitated a lighthouse. Bayfield’s ‘zero point’ in the 1823 survey became the location of the Minnesota Point Lighthouse.

Lighthouse construction began in late summer of 1856 after the initial appropriation from the U.S. Congress of $15,000 in 1855. At that time, Duluth did not exist and a few native Ojibwa who would soon be relocated due to the settlement of the 1854 Treaty of LaPointe inhabited Minnesota Point.

The site consisted of a 50-foot tall, cylindrical, red brick, whitewashed tower that was crowned by a five-sided lantern room. Adjacent to the lighthouse was a two-story keeper’s house. The light was a fifth order Fresnel lens, which provided a constant red signal that was fueled by kerosene.

The Superior Entry was only eight or nine feet deep across Minnesota Point. When a ship did reach Superior Bay, a deep but meandering channel had to be navigated to get to the Superior docks.

The U.S. Army Corps of Engineers surveyed the harbor and existing entry in 1866 and recommended a deepening of the natural entry along with the construction of two wooden piers. Money was secured and the project began in July of 1868.

The battle over which city would control shipping ratcheted upwards when the railroad came to Duluth in 1870. Ships sailing to the Duluth railhead had to come through the Superior Entry and then navigate the windy and shallow channel to the Duluth docks. Quite often, ships would run aground. The construction of the Duluth ship canal is a story in itself, but with the completion of the canal on the Duluth side of Minnesota Point, the end of the Minnesota Point Lighthouse as an aid to navigation came quickly.

In the late 1870’s, the federal government built more sturdy rock breakwalls along the Superior Entry to deepen and protect the channel. A lighthouse was constructed on the north breakwall using the Fresnel lens from the Minnesota Point Lighthouse. The present Superior Entry Lighthouse was built on the south break wall in 1913.

The hike to the lighthouse structure wanders through magnificent red and white pine stands estimated to be over two hundred years old. Some of these pines are in jeopardy of removal due to the adjacent airfield and federal regulations on clear air space into the airport. Aviation officials are working on strategies to minimize the taking of these stately trees. 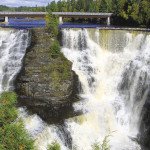 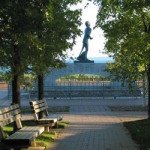