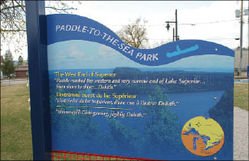 When the international best-selling children’s book Paddle-to-the-Sea was first published in 1941, it is unlikely the book’s Michigan-born author and illustrator Holling C. Holling imagined it would someday launch a $4.3 million destination theme park in the small town of Nipigon (pop. 1,752) on Lake Superior. But it did. Ten years in the making, the Paddle-to-the-Sea Park was officially opened this spring.

The award-winning book tells about the travel adventures of a small wooden canoe and paddler carved by a First Nation boy near Nipigon. The tiny canoe journeys from Nipigon River south to Thunder Bay, Duluth, the Apostle Islands, then through the Great Lakes and the St. Lawrence Seaway, eventually reaching the Atlantic Ocean. In 1966, a film based on the book, produced by Canada’s National Film Board and directed by the late paddler/film maker Bill Mason, was nominated for an Academy Award. The film is online at www.nfb.ca/film/paddle_to_the_sea.

Located in downtown Nipigon, Paddle-to-the-Sea Park is a whimsical family place with interactive stations highlighting the chapters in the book and by doing so, provide an entertaining way to educate about the Great Lakes. Interpretive quotes from the book are presented in three languages—Ojibwe, French and English—on displays that include waterfalls, sawmills, beaver dams, grain elevators, lighthouses and more. A promenade leads to Nipigon River where the last station is located, a perfect spot to view the river waves, cliffs, and birds like the peregrine falcons and white pelicans.

There’s also a touch of mystery to the story of Paddle-to-the-Sea. While it is known that Holling visited Nipigon, no one knows what inspired him to start the story in the small town. But perhaps there is a clue in the recent photograph taken by Rita Imhoff of the rock cliffs across the Nipigon River. It seems when the sunlight hits the cliffs a certain way, a section of a rock cut looks like a paddler in a canoe headed out to Lake Superior. Coincidence? Or perhaps this is the image that stirred Holling’s imagination to write Paddle-to-the-Sea, with the journey starting in Nipigon.

The Paddle-to-the-Sea Park is part of a major revitalization plan for historic Nipigon, which celebrated its 100th anniversary in 2009. Its fur-trading history goes back 331 years to 1679 when the first post was built here. While funding for the park was largely provided by the federal and provincial governments, it is the townspeople of Nipigon who deserve much of the credit for making Paddle-to-the-Sea Park a reality.

“It was the diligent hard work of volunteers in the community over the years that made this all happen,’‘ said the former economic development coordinator Lavina Collins. 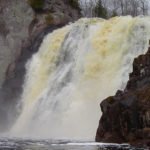 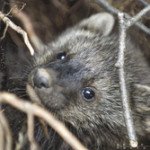