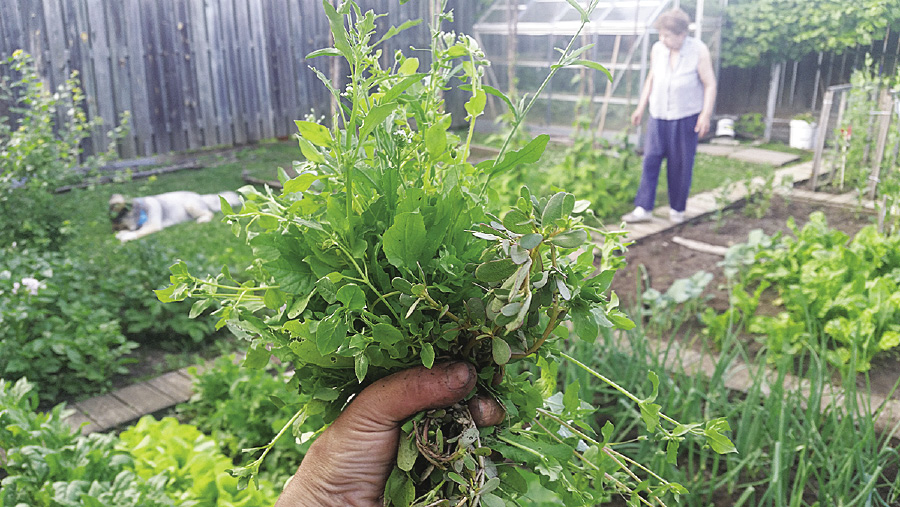 A handful of miscellaneous weeds including purslane, chickweed, dandelion and lamb’s quarters, from my grandmother’s garden. | JULIA PRINSELAAR

The garden ritual of every growing season always seems to begin, and continue, with pulling the weeds/wild greens. We turn over patches of dandelion and cat’s ear to cultivate rows of peas and corn, or tear up a groundcover of purslane that sprawls through a patch of pole beans.

This year I planted my grandmother’s vegetable garden, which used to be meticulously tended by my grandfather before he passed away nearly two years ago.

I hadn’t been to her garden in a few weeks, and the rains and hot July days gave everything free reign: tangled tendrils of chickweed grew between the Swiss chard; upright shoots of lamb’s quarters were beginning to bolt; crowns of mature dandelion plants turned tough in their post-flowering stage.

It felt overwhelming to commit to hours of pulling weeds, only to drop them into a bucket and dump them in a compost heap. All this work, to throw everything away?

As it turns out, the wild greens that we pull out each spring and through the summer are indeed edible, and can be just as delicious and nutritious as the greens that we put so much effort into cultivating.

It’s no secret that many wild greens can taste tart, pungent and bitter, and as such, may be rejected. But it turns out that—surprise!—just like harvesting cultivated greens, there are prime times and parts to harvest when it comes to wild ones. And in addition to the adoption of proper harvesting techniques, I often wonder: do we look at the plants that grow in such wild abundance and think, Nah, you show up everywhere. You’re not special enough. Why should I bother cooking with you? Or have we just assumed that what grows wild is too unpredictable, unsafe and mysterious to incorporate into our diets? It may be a combination.

John Kallas, a leading expert on foraging for wild edible plants, sheds some light. “Gourmet quality, of course, depends on gathering the edible parts at their prime stage of growth and using those parts to their best advantage. As a general rule, leaves (like other plant parts) start out tender and remain reasonably so until they reach their end size.”

Still, cooking with wild greens may require an adventurous palate and an acquired taste. Some are bitter and more pungent, but there are others that even a finicky green eater may enjoy. Here are a few to start with that are Foundation Greens, as Kallas calls them—greens whose mild flavours have a neutral base and can be substituted for common foods like spinach and lettuce. Nevertheless, these greens have their own characteristics and flavours, too. Have fun experimenting.

Like all of the wild edibles listed here, lamb’s quarters are abundant in disturbed soils throughout North America. In Kallas’ book, Edible Wild Plants, he refers to this plant as Wild Spinach, and that name lends some truth. Young lambs’ quarters have a hint of spinach flavour, and are an easy substitute for domesticated spinach. Flavour-wise, when cooked, few would notice the difference.

Lamb’s quarters are higher in fiber, betacarotene (vitamin A), vitamin C, riboflavin, calcium, zinc, copper and manganese than its agriculturally-cultivated cousin. Domesticated spinach wins in omega-3s, folic acid and iron. It’s worth noting too that lamb’s quarters contain oxalic acid, which tends to bind to calcium and other minerals to make them partially unavailable. Still, this plant is a nutritional powerhouse and oxalates are less of a problem to people who consume a healthful, diverse diet.

To harvest for raw eating, clip off the most tender leaves and leafy stem tips, and add them to your bowl as you would any other cultivated green. For cooking, you can harvest quickly and not worry so much about presentation: grasp the stem close to where it is branching and pull upward, gathering all the leaves and tender side stems in one stroke.

Chickweed is a moisture-loving, cold-tolerant plant that thrives in soft, rich soil. Commonly found in lawns, landscaped areas, gardens, pastures and open fields, it is native to Europe but has naturalized all over the world. It tends to grow in spurts when conditions are right, especially in the spring around the end of winter, making it an ideal early forage food.

Chickweed grows in clusters from its base and produces a groundcover of sturdy, sprawling stems with opposite leaves and small white flowers. I’ve sautéed it with other vegetables and cooked it into scrambled eggs, but it’s worth noting that not all chickweed is the same. Like most plants, certain parts can be tender or tougher, and you’ll find that these principles often relate to wild foods in the same way. Chickweed is often rejected for being fibrous and stringy, but that’s because novice harvesters often cut off the upper half of the plant and chop it all into a salad. I’ve done this before and just eat it anyway, but I’m not a picky eater. “The result is a straw-like flavour and texture,” writes Kallas. Instead, just collect the top one to two inches of chickweed, which you can use in place of, or with, lettuce and sprouted alfalfa.

This drought-tolerant summer succulent looks unlike most weeds that are found in your garden. It has reddish stems that form a network along the ground with offshoots of small, clustered, leafy stems.

Purslane has more than double the amount of omega-3s that kale has and more than any other leafy green ever analyzed, claims Kallas. He recommends harvesting the new, rapidly growing tips of the plant before it goes to seed. Leafy stems, as well as leaves, are just as edible and can be used in fresh food dishes. Because this plant is a water-storing succulent, you’ll find that its stems have a crunchier texture. As such, they make a fun and unique choice for pickling. Try putting a bunch of older, thicker purslane stems into a container of leftover store-bought pickle juice. If you like the results, look up a real pickling recipe; it will take more time, but the results might be worth it.

Now that you know more about these common edibles, there’s a good chance you’ll notice them popping up between your rows of garden vegetables and flower beds. We’ve conditioned ourselves to dismiss these plants as unruly, wild and rebellious, without considering that maybe they carry a different message. Before you cast them into your compost, try harvesting a few and see what kind of creativity they inspire in your cooking, and in conversation at the dinner table. Give weeds a chance. 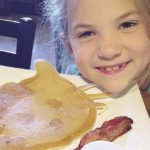 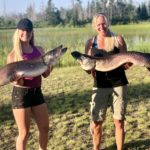 What a pair of pike!