Two 45-inch northern pike caught within one hour, and quarter mile of each other on Saganaga Lake by mother (Julie Collman on right) and daughter (Jessica Berg-Collman on left) of Grand Marais. Jessica’s weighed in at 28 lbs and Julie’s at 25 lbs. Both personal best Northern Pike. | SUBMITTED

It was the last spot of the day. Jessica Berg-Collman was trolling on sprawling Saganaga Lake on the Minnesota border with her mother, Julie Collman. Both are from Grand Marais. The mother-daughter duo had already landed a few fish, including lake trout, pike and bass. They were using Musky Jakes, a lure intended for big fish. As the women can attest, the lure works.

“It was a good thing we had a musky-sized net in the boat,” Jessica says.

After landing the fish, the women spent about 40 minutes trying to revive it for release, with no luck. They decided to keep the big pike and continue fishing. An hour later and a quarter mile away, it was Jessica’s turn to shine. She had another brute pike on the line. When she battled the fish to within 15 feet of the boat, it decided to put on a show. Coming completely out of the water, it tail-walked across the surface. When Jessica landed the pike, she discovered that it, too, was 45 inches in length. As with the first fish, they were unable to revive it.

Landing two 45-inch pike an hour apart is an incredible stroke of luck. Yet one angler was a little luckier than the other. Jessica’s pike weighed 28 pounds; her mother’s, 25.

“Mom had a hard time with it,” reports Jessica. “She says that because she caught hers first, it lost weight before we weighed it.”

No matter. The pair of pike are Jessica and Julie’s personal bests. They plan to have them mounted.

Jessica says that when she and her Mom fish together, they have some strange luck with northern pike. Five years ago, they happened upon a recently deceased pike that had choked on a three-pound sucker. That fish went to the taxidermist, too. 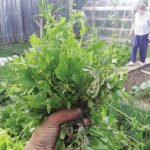 Wild Greens: Give Weeds a Chance 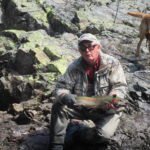