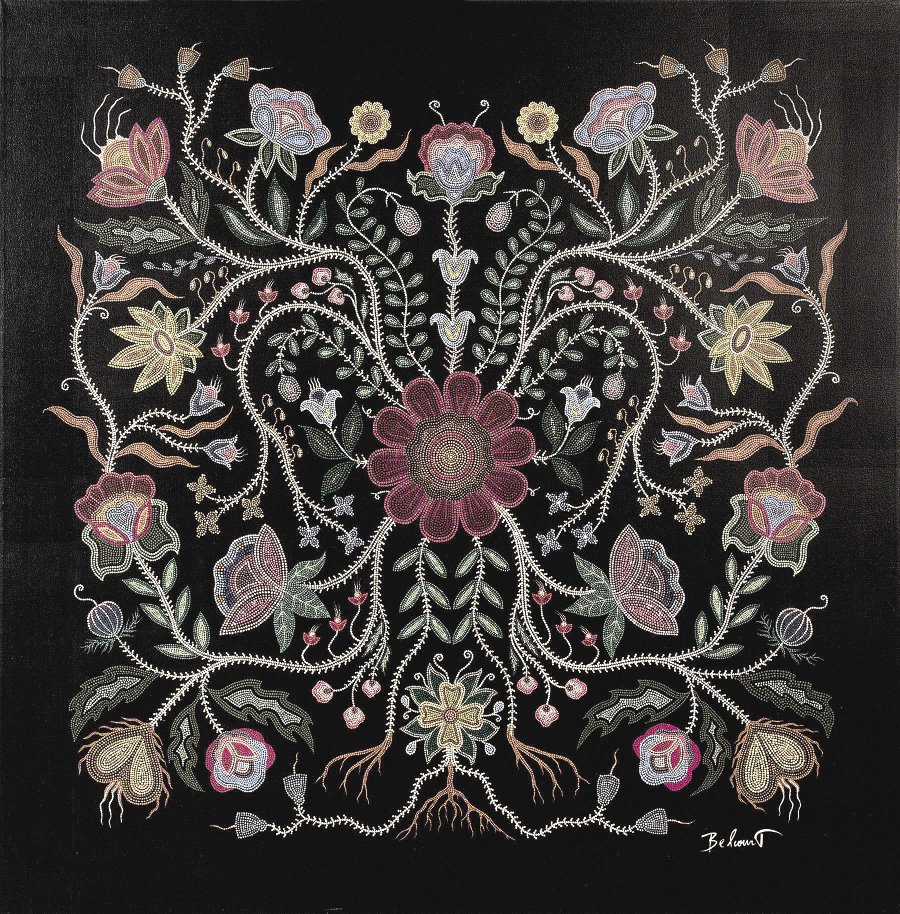 Partway through the 19th century, scientists began to synthesize new pharmaceuticals in the laboratory. Often, these were inspired by or based on chemical compounds found in botanicals, which were once a principal source of medicine. Herbs to sooth our skin, to mend broken bones, to stop bleeding, to relax our nerves, to regulate hormones, to treat painful insect bites, and the list goes on.

At one time, these medicines grew in abundance all around us. But over time, the degradation of habitat, combined with the popularity of modern medicine and dual skepticism of folk remedies, drove herbalism and traditional healing underground.

I pondered the state of our society’s well-being and its relationship with the natural world as I stood before the paintings of Métis artist Christi Belcourt’s retroactive exhibit Uprising: the Power of Mother Earth at the Thunder Bay Art Gallery.

The collection includes pieces by emerging artist Isaac Murdoch, as well as Belcourt’s work spanning more than two decades. Some of her more recent pieces are murals painted with hundreds of coloured dots on a black background, stylistically similar to traditional Métis floral bead work. The dots take the form of plants, mammals, fish, insects and birds who inhabit her pieces. From a distance, they resemble constellations in a night sky. Up close, they remind me of cells under a microscope.

In a changing world suffering the loss of natural habitat, Indigenous culture and identity, Belcourt says Uprising is “a call to action.” The exhibition’s opening was held in conjunction with a community art build in Thunder Bay last June, where dozens of people gathered at the Baggage Arts Building to hand paint and screen print 500 banners to be sent to front line actions opposing pipeline construction in western Canada, including the Trans Mountain Pipeline in British Columbia.

Standing roughly 9 ½ feet long by 6 ½ feet tall, The Wisdom of the Universe is a celestial-like mosaic of plants, birds and insects, including some species that are at-risk or threatened. Others include wild edibles and medicinal herbs that have been used for generations, such as wild ginger, sumac, apples, cedar and strawberries.

The exhibition is complemented by a small book that documents traditional Métis plant use called Medicines to Help Us, authored by Belcourt with an opening essay by Rose Richardson and Michif language translations by Rita Flamand and Laura Burnouf.

Being an amateur botanist with an interest in ethnobotany, I had to buy it. It is all about the restorative power of plant medicines, and contains first-hand information on the traditional uses, harvesting protocols, and names of 27 plants in English, Latin, Nêhiyawêwin (Cree), Anishinaabemowin (Ojibway), and three distinct Michif languages spoken by Métis people whose territories range from Ontario westward.

Several of the plants in Belcourt’s paintings are referenced in this book, such as blueberries, tansy, and sarsaparilla. Rebuilding relationships with these plants, says Belcourt, is an act of resilience that people can take in the wake of resource extraction and pipeline expansion.

Uprising: The Power of Mother Earth is on display until Nov. 25. 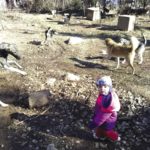 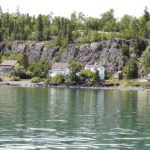