On a recent afternoon, I begged off from heading back into the deer woods after lunch. A buck was hanging from the gambrel in my garage. I wanted to get to it with a knife. Afternoon daylight and temps above freezing would make the task at hand much easier.

Some folks like to hang their deer for a few days to age the meat. During November in my neck of the woods, we rarely have temps that are “just right” for aging meat. Either it is too warm or too cold. Since I don’t want to lose venison due to spoilage or wrestle with a frozen carcass, I try to process a whitetail as soon as I can, usually within a couple of days of killing it.

Before heading into the garage, I gave my Buck sheaf knife a few swipes on a steel to touch up the edge. I’m not sure how many deer this knife has field-dressed, skinned or butchered, but I’ve carried it since I began deer hunting at age 13. That was long ago.

Out in the garage, the buck in question was killed two days previous, downed instantly from a shot to the neck. A quick examination of the carcass showed both the entrance and exit wounds were in the neck, which would make for easier skinning and no bullet-damaged meat. I went to work.

When I take the hide off a deer, my primary goal is to avoid getting any hair on the meat, something that was drilled into me by my father. I was tutored in the ways of whitetail hunting by a man who believed processing your kill is not a job that you entrust to the neighborhood butcher. Instead you do it yourself. I have early memories of sitting on the basement stairs, watching my Dad and his hunting companions cutting up deer. I began helping butcher deer long before I was old enough to start hunting them.

With a deer hung from a gambrel, I like to start skinning at the hind legs and pull the hide down, occasionally making small slices with the knife to free it from the underlying membrane and tallow. It doesn’t take long to skin a deer, but I never rush the job. That’s how you end up with hair on the meat.

I still had plenty of daylight left when I cut off the buck’s head at the neck wound and pulled the hide (with head attached) away from the carcass. After a quick break for a couple of sips of coffee and to touch up the Buck with the steel, I went back to work, removing the back straps, a task you can liken to fileting a fish. Then I started cutting the muscles from the hindquarters. You can look at various diagrams about how to do so like a butcher, but I just carefully cut all of the meat from the bone.

Now it was time to move inside to make the final cuts and wrap finished venison with freezer paper. For many years, this was a three-person process. Dad made cuts, I trimmed away the membrane and tallow, and Vikki wrapped and labeled everything for the freezer. Since Dad and Vikki are now gone, I do it myself, which can make for a long evening, especially if I’m processing more than one deer. But I mind neither the work nor the memories it evokes.

I began with the backstraps, which are easily trimmed and sliced into inch-thick steaks. Fortunately, I had just enough freezer wrap to package them. Now it was getting dark, so I sent a friend to town for more freezer paper when he came out of the woods. Taking a break from butchering, I made dinner; chunks of pheasant breast and broccoli from the garden in a sauce served over boiled Yukon gold potatoes, also garden grown. Well fed and with an ample supply of freezer wrap, we went back to work.

My friend started working on the front quarters while I cut and wrapped everything else. The dogs laid on the floor nearby, just in case one of us dropped a scrap of meat. They, too, are well versed in this annual task.

Before long, it was time to get out the grinder. I still have the hand-turned grinder, which is older than me, that we used for many years. It works just fine. But some years we process several deer. That’s when the “new” electric grinder really shines. I believe we purchased it more than 20 years ago.

Some folks make their own venison sausage. I used to do so, but over time found that I was eating less and less of it. At least a decade ago, I began grinding all of the scraps into burger, which has become a staple ingredient in my cooking. If you are served tacos, spaghetti, chili or similar dishes from my kitchen, they’ll include venison burger browned in olive oil.

It didn’t take long to grind and the wrap the burger. All that was left was clean up. We made short work of that and did fine job of it. Vikki would be proud. Best of all, we were done early enough to get a good night’s sleep before heading into the woods the next day.

One of the last things I did was scrub up the old Buck knife and put it back with my hunting gear. Over the years, that knife was in the company of some fine hunters; Bobby, Uncle Frank, Gene, Dad, Tim and also Vikki. They’re all gone, but with that knife I carry on our shared way of life. 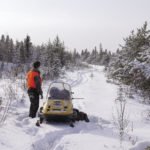