Somehow, I just knew it had to be my fault. Are you wondering what happened to the missing Minnesota moose? Wonder no more. Just blame me. After all, I’m a northeastern Minnesota deer hunter.

In a story titled, “Solved: Deer have a direct role in the death of Minnesota moose” the Minneapolis Star-Tribune reported on Nov. 7 (coincidentally, just four days after the opener of the annual northeastern Minnesota firearm deer season) that a brain worm parasite carried by deer and fatal to moose is the leading cause of death for Minnesota moose. And wildlife managers can’t do anything because of those darned deer hunters, who supposedly are demanding what today’s biologists consider too many deer.

It’s hard to know where to begin with this one, but we can backtrack nearly two decades when people who spent a lot of time in the woods (including this writer) noticed moose numbers were declining. State and tribal wildlife managers either ignored or brushed off this “anecdotal evidence” and continued holding three separate state and tribal moose hunts. Eventually, wildlife managers (some far sooner than others) admitted all was not well with moose. Committees were formed, meetings were held and finally, studies were begun.

Since then, biologists have tossed out theories about the moose decline like empty beer cans along the research highway. First, we were told moose were dying due to climate change. Since then, the blame for the lack of moose has been placed on too many winter ticks, hungry wolves and bears, not enough catastrophic wildfires and so forth. A knowledgeable observer once told me that it seemed researchers trying to pin down “anything but brain worm” as a cause for the moose decline.

The pronouncement that brain worm is the largest source of moose mortality is hardly news. In fact, when discussions about the moose decline began, the old school biologists all said the most likely culprit was brain worm, long known to be the primary affliction of Minnesota moose. Back when we had more of them, it wasn’t uncommon to see moose infected with brain worm, easily identifiable because they would act confused or semi-tame and their head would be cocked to one side, a symptom of the illness. It’s also long been known that deer pass brain worms via their feces to a tiny snail the moose ingest while eating vegetation. This means deer and moose don’t mix.

That said, northeastern Minnesota has supported deer and moose since the early logging era a century ago. Both species thrived on the human-altered (logged off) landscape that had previously supported woodland caribou. Over time, deer did best in places near human habitation and development, while moose thrived in the far northeast, where there were fewer people, deeper snows and extensive logging activity. The forest disturbance created by logging or fire is excellent moose habitat.

While you might encounter deer and moose in the same place, most often they are segregated by habitat type. They overlap more in the summer, when deer migrate deeper into the forest. Deep snows force deer to migrate to wintering areas, such as the shore of Lake Superior. Concentrations of wintering deer can lead to a perception that the North Shore’s deer population is more numerous than it actually is.

Deer hunting has been a traditional activity here since at least the 1920s. In the 40-plus years I’ve been hunting northeastern Minnesota and the North Shore, I’ve seen deer abundance rise and fall in response to winter conditions. Get a few easy winters in a row and you have lots of deer. Back-to-back harsh winters, which occur every decade or so, knock the bottom out of deer numbers.

Following a couple of recent deep-snow winters, northeastern Minnesota deer hunters have found slim pickins. Many of those hunters would like to see a few more deer and have advocated for conservative bag limits such as bucks-only or a limited number of doe permits. Most of those hunters are aware deer numbers rise and fall in rhythm with winter severity.

There is irony, if not futility, in moose researchers hoping to use hunting to reduce deer numbers at a time when the population is already at a low point. Given the fact many northeastern Minnesota deer hunting camps have been around for 50 years or more suggests the interrelationship between moose and deer has gone on for a long time. It must be pointed out there remain vast areas in Lake and Cook counties where deer numbers are so low that no one hunts them. Moose are missing there, too. Also, the moose decline doesn’t magically stop at the Minnesota/Ontario border. The dearth of moose extends far northward from that line.

If deer populations grow and expand into moose territory, is there really anything either wildlife managers or hunters can do about it? If whitetails increase in abundance, it won’t be due to hunters demanding greater numbers of them. Almost certainly the reason will be a series of favorable winter coupled with improved habitat conditions.

And better habitat conditions for deer or moose are unlikely to happen in the foreseeable future. Downturns in the forest products industry has reduced timber harvest by nearly half across northern Minnesota. New growth after harvest creates the preferred habitat for forest game species, including deer, ruffed grouse and moose. Some hunters have begun making the connection between less logging and fewer grouse and deer in today’s forest.

So why are some researchers blaming deer hunters for Minnesota’s missing moose at a time when whitetails are just recovering from winter die-offs and habitat conditions are in decline? Perhaps hunters are just a convenient target. When it comes to Minnesota moose, perhaps the biggest mystery is this: Why did we spend millions of dollars and more than a decade on research to learn something we already knew? Brain worm remains the primary affliction of Minnesota moose. 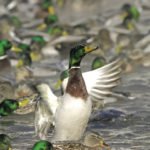 Time with the knife, and memories