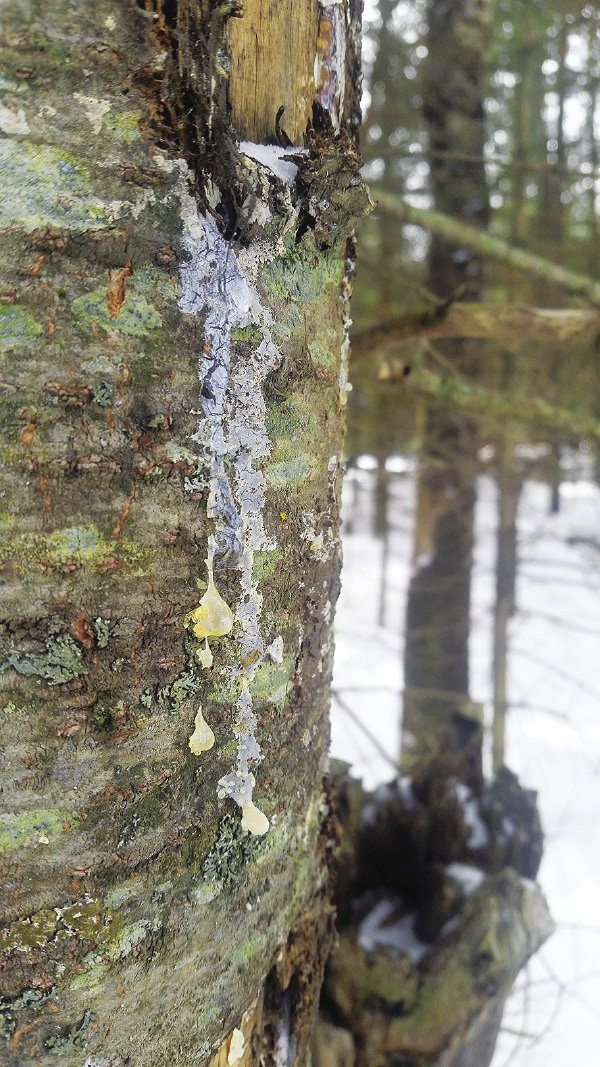 As winter wanes and the sun grows stronger with the approaching vernal equinox, sap begins its seasonal flow in the trees of the North Woods.

Sugar maples, revered for their sweet, carbohydrate-rich liquid, are the tree of choice for commercial sugaring due to their high ratio of sugar to water in their sap. But as it turns out, many other trees can be tapped for a fresh, springtime tonic. And some trees—particularly conifers—produce other useful, sticky substances all year round.

Conifers play a critical role for wildlife in North American forests. Spruce and pines provide food and shelter for red squirrels, porcupines, snowshoe hares, grouse, red crossbills, pine grosbeaks, pine siskins and other seed-eating birds. Humans have developed countless uses for these trees as well. The long, straight board feet of the white pine in particular was instrumental in shipbuilding. And throughout Canada, spruce remains a culturally significant utility plant for Indigenous peoples, with white and black spruce common throughout the Boreal Forest and the Hudson Bay lowlands of northern Ontario.

In traditional herbalism and wilderness first aid, conifers have an abundance of uses. The moist inner bark can be used externally as a poultice or compress to treat slivers, sores and inflammations, according to Lone Pine’s field guide, Edible and Medicinal Plants of Canada. The gooey, amber-colored resin of pine and spruce trees—also known as pitch, which is different from the thin, watery sap—has been used to treat skin infections, insect bites, chapped hands, cuts, scrapes, eczema, burns and rashes. There are records of the gum being chewed or boiled and taken like cough syrup to relieve coughs and sore throats, and to aid in digestion.

In Ontario and Minnesota’s back country, where coniferous trees are the dominant species and thousands of rivers snake through the landscape, tree resin is an invaluable natural adhesive. When craftspeople at the Ely Folk School constructed a traditional birch bark canoe, they sealed the seams with a mixture of spruce pitch, bear grease and charcoal, which adds strength and pliability to the glue. Tree resin can also be used to preserve and waterproof strips of rawhide, or babiche, in ropes, snares and snowshoes.

For centuries, Eastern Europeans and Russians have been celebrating the first signs of spring with the tapping of birch trees. This slightly sweet water, with sugar content of only one to two percent, can be consumed straight (simply called ‘birch water,’) fermented into an alcoholic drink, or boiled and reduced to make a dark syrup with a complex flavour profile, bringing forward notes of molasses and minerals.

While birch water is making gains in global markets, its syrup hasn’t achieved the same culinary status as maple syrup—only about 5,000 gallons are produced around the world annually. It could be because it takes so much energy to produce. It takes an average of 110 gallons of birch water to make 1 gallon of syrup. By comparison, maple syrup averages about 40 to 1.

NOTE: Use cookware and kitchen tools specifically designated for working with tree resin. You’ll have a really hard time cleaning melted resin from pots and utensils.

In a double boiler, add the tree resin and olive oil and bring the water to a slow boil until the resin becomes soft and gooey. Continue to heat the mixture under a simmering heat for 3 to 4 hours. The tree resin will begin to infuse into the oil and your kitchen will smell like the Boreal Forest.

Cool and strain any solids with cheesecloth and discard. Return the strained oil to the double boiler and add the beeswax, stirring until completely melted and mixed in with the oil. At this stage, it is recommended to test the ointment by pouring a small amount into a spoon and placing it in the refrigerator for two minutes to solidify. Remove from the refrigerator and test its consistency by rubbing it onto your skin. If the salve is too oily, return to heat and add more beeswax. Too hard and you may want to add more oil. Experiment to find a consistency that you like, but keep in mind that the salve will be effective for treating minor cuts and scrapes for your personal first aid. 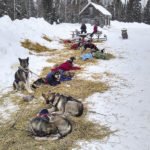