In January 2016, a giant spinning ice disc, about 24 meters (78 feet) appeared on the Vagala River in Estonia, in Vana-Vigala. | LUC SAFFRE

A few months ago, while reading the non-fiction book Barrow’s Boys: The Original Extreme Adventurers by Fergus Fleming, I came across a description of “crimson snow” by Sir John Ross, a British naval officer during his 1818 Arctic expedition. The bright red coloured snow was on 600-foot cliffs on the northern coast of Greenland stretching for about eight miles between Cape York and Cape Dudley Digges. Naming them the “Crimson Cliffs,” Ross wrote, “This snow was penetrated even down to the rock, in many places to a depth of ten or twelve feet by the colouring matter.”

Scientists of the day struggled to explain the red snow phenomena, some saying the colour was from moss seeds, other saying fungi or plants. Historically, red snow was first mentioned more than two thousand years ago by Aristotle and Pliny the Elder. Believing the snow changed colour as it aged, Pliny wrote, “Indeed, the snow itself becomes red after it has lain some time on the ground.” Apparently, the famous Charles Darwin while visiting the Andes Mountains witnessed white snow turn bright red as it thawed.

Digging into research, it seems that red snow—also observed in colours of green, pink, orange and watermelon—is common during summer in the alpine, mountainous and polar regions on all the continents.

So, how does white snow turn colours? According to scientists, it is generally caused by cold-loving single-celled green algae (kin of seaweed) that also contains a bright red pigment. The algae (Chlamydomonas nivalis) survives winters in deep high-altitude snow fields but once there is warm weather, produces a red pigment as protection against solar radiation (kind of like putting on sunscreen). As the snow with algae thaws, it changes colours though colours can vary depending on conditions. For example, green snow appears when sunlight reflects the green from the green algae.

Journalist Alan Burdick’s article, “Why the Last Snow on Earth May be Red” in the New Yorker magazine (September 21, 2017) explains the algae’s life cycle:

“In spring they wake up and swim up through the trickle of snowmelt to the surface, dividing and photosynthesizing as they go. Then, at the top, they turn red. This creates what scientists call pink snow or watermelon snow—drifts and glaciers that look like Slush Puppies and eventually reduce to rivulets of crimson.”

Nature also has some other fascinating snow/ice phenomena, like the rare spinning ice discs that can occur on slow-moving waters in cold climates. These ice discs—also called ice circles, ice pans, or ice crepes—are circular slabs of ice that rotate slowing on the surface of a body of water. Conditions need to be just right for ice discs to form: ice patch, slow moving current, and warm water molecules rising to create a water vortex pushing on the ice cover to rotate.

Did you know there really are such things as ice worms? You may have heard of them in poetry and song—like poet Robert Service’s whimsical “Ballad of the Ice Worm Cocktail” or the humourous Canadian folk song “When the Ice Worms Nest Again” (a theme song at annual gatherings of silver miners in Cobalt, Ontario and fur trappers in The Pas, Manitoba)—and thought them imaginary literary props.

But ice worms are real, living their entire lives in glacial ice in Alaska, Washington, Oregon and British Columbia. They resemble common earthworms but are small; only about an inch long and black or blue in colour. In the summer during evening and morning, masses (some reports say millions) of ice worms wriggle to the top of glaciers to feed on snow algae; in the fall/winter, the ice worms live beneath the surface of the glaciers. Scientifically, the ice worms are “enchytraeid annelids” of the genus Mesenchytraeus (which contains 77 species, including the North American glacier ice worm and the Yosemite snow worm.)

And by the way, about those red and coloured snows. Well, scientists say they may be accelerating climate change. How? Since all coloured snow darkens the surface of snow, it results in the snow absorbing more sunlight which leads to the melting of snow faster on the glaciers. 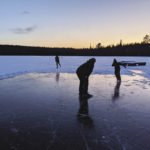 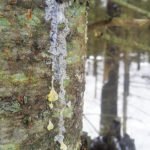