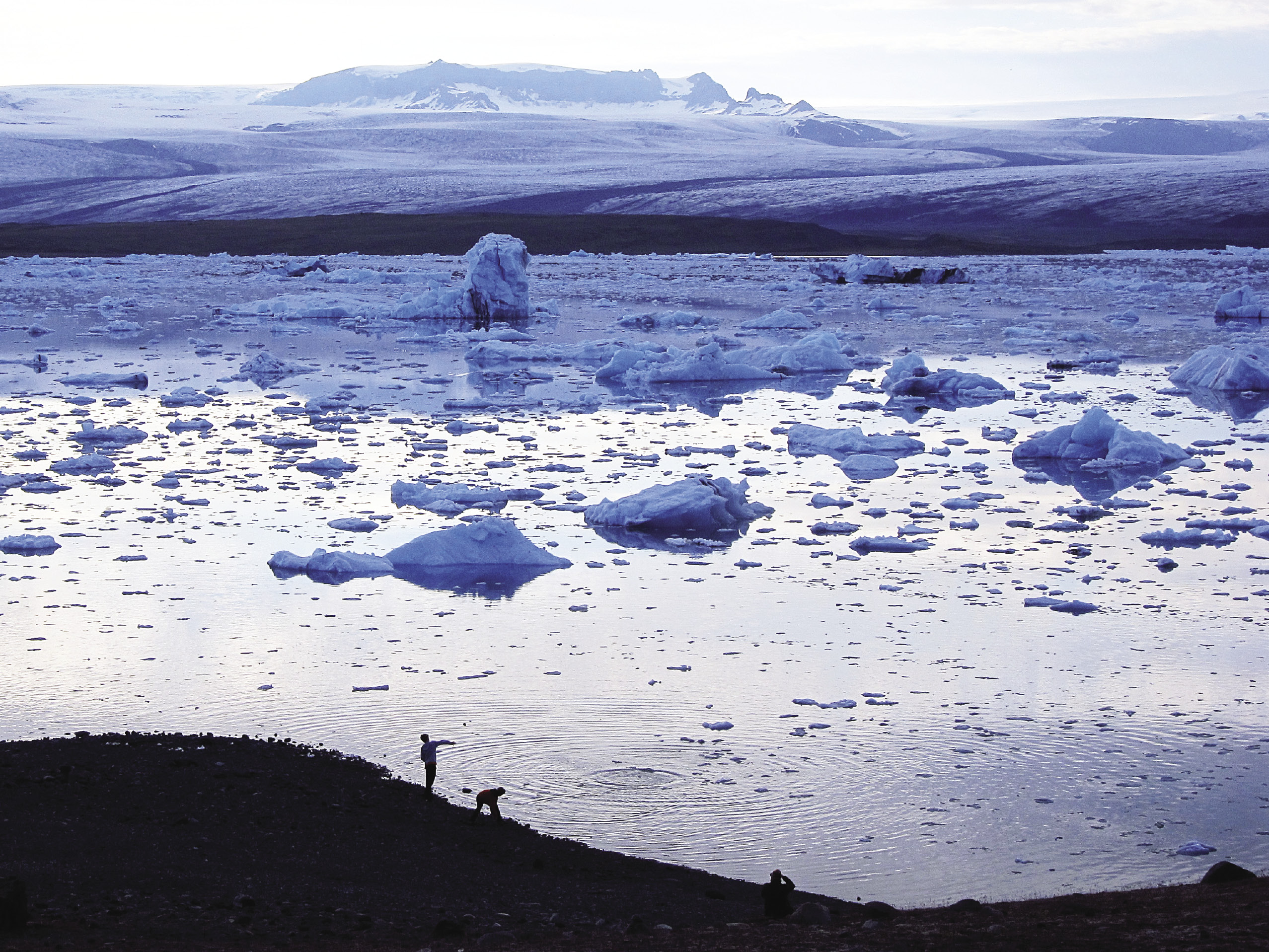 Jökulsárlón, in southeast Iceland, is a large glacial lake and is considered one of the natural wonders of Iceland.

Story and photos by Micaella Penning

Iceland continually reminded me of places I had been before and places I hadn’t. The vibrantly green hillsides, dotted with fuzzy sheep, looked like pictures of New Zealand. Waterfalls draped over vertiginous cliffs emitting rainbow-laced spray above inky volcanic rock and thickly verdant plants elicited the Hawaii from commercials. Heavy, oozing fog floundered along the coastline, ebbing and flowing beneath the blue sky like the tides below, reminiscent of the Northern California coast. Rolling hills and flat prairie-like chunks of land extended to high, jagged mountains in the distance, evocative of northwestern Montana.

The landscape takes center stage in Iceland, its oddities embraced rather than fought. Hot water from any tap emits a sulfuric, eggy odor from its steaming, underground origins. Wastewater from Svartsengi, a geothermal energy plant, is pumped into a basin amidst stubbled lava, creating the Blue Lagoon. The pools of milky blue saline water maintained an air of serenity, despite the tourists taking pictures from the restaurant rooftop, bundled in winter parkas, while bathers in bikinis floated below. I slathered my face in white silica mud that sat in buckets by the edge of the lagoon.

My husband and I rented a car and drove southeast on the Ring Road, which circles around the country and stays close to the sea on the southern coast. Only in the 1970s did the entire road become paved. Many bridges were just one lane and rattled as we crossed rivers descending from the interior’s glacial stirrings. Hay bales wrapped in glistening white plastic dotted the landscape, rhythmically placed across the freshly shorn fields.

Vibrant lupines blanketed the roadsides, as the ground became purple until mountains rose in the north or rocks led to the strand on the other side of the road. Seeing these familiar blossoms reminded me of my home in northern Minnesota.

In an age of island manufacturing, where man creates his own artificial islands (Japan’s Kansai International Airport in Osaka Bay and Dubai’s Palm Islands in the Persian Gulf), Iceland gains new terrain from geological processes. The island of Surtsey erupted from the ocean floor in 1963, southwest of Heimey, the largest of the Westman Islands off Iceland’s southern coast. Since then, the island’s size has ebbed from one square mile to half that, but its elevation still reaches over 500 feet above the waves. Vegetation wasted no time in colonization, as the volcanic lump is coated in growing things, with names like sea sandwort, wooly willow, sea lyme grass, arctic fescue and cold eyebright. Sea rockets (Cakile arctica) were found just two years after the island emerged from the ocean depths.

We found our own patches of wooly willow by the Skaftafellsjökull, a slender finger of the mighty Vatnajökull, one of Europe’s largest glaciers. Its leaves were brightly green, yet covered in white fuzz, growing mere inches above the lichens and mosses, as most endemic species in Iceland do, with wildflowers miniscule in size and close to the ground. Harebells poked up sporadically, another reminder of Lake Superior’s shore.

Before reaching these low-lying plants, the glacier was so smooth and ash-filled in places that the ice looked like sloping granite. But freshly melted water dripped off the edges and flowed through narrow cracks that broadened in areas to form fast-flowing streams and moulins, vertical shafts bored through the ice. The water gouged ghostly holes, leaving dark, shadowy perforations. Turbid with sediment, the rivulets of glacier water were the color of milky coffee, riffled by stones and chunks of ice.

By the sea, columns of basalt rose in a serrated line, with small ledges covered in hummocks of lime green grass and minute white and yellow flowers, home to nesting puffins. They dove from their nests—beaks brightly red, feet webbed orange triangles—to the ocean’s gray surface, even more graceful under water than above. Bundled in fleece (though it was July) we sat on the beach of smoothly rounded pebbles and watched their descent from cliff to pallid water.

But even here, the land is not as it seems, free from man’s meddling hand. The lushly abundant lupine are an invasive species, native to Alaska and Canada, and brought to Iceland in the late 1800s. Used to ease erosion and put nitrogen back into the soil, the plant spread rapidly, both on its own and with the Forestry Service’s help. Now, the plant is causing problems, leaving no room for native species, exemplified by the near extermination of the bilberry plant. The crowding height of the lupine also causes the shady demise of lichens, mosses and low shrubs, blocked from an already scant sun. The erosion predicament stems from the initial settling of Iceland over one thousand years ago, when nearly all of the trees were converted into homes and firewood, denuding the land for wind and water to take their course.

Barren, otherworldly scenes and tax breaks draw an array of filmmakers, whether to document retreating ice or film for Hollywood. Our glacier-hiking guide, Sigurdur, told us this abundance of film crews meant vast environmental damages in some instances, while other teams were careful to leave without a trace. When we visited Jökulsarlon, a glacial lagoon flanked by Skaftafell National Park and the ocean, the water was powerfully still as tips of icebergs peaked above the smooth surface. A slab of ice jettisoned off, grinding and crumpling, the water now rippling out, followed by more silence in the fading light of an Arctic night. But in 2002, the lagoon became an icy racetrack for supercars, as film crews frustrated by unusually warm winter temperatures dammed the lagoon from the incoming trickle of seawater so it would freeze. The result was a classic James Bond car chase in “Die Another Day,” complete with Jaguars and Aston Martins growling across the smooth ice, against a backdrop of blue skies and wrinkled glaciers.

As we walked across the glacial till to the Solheim glacier, Sigurdur noted that, “Last year, this is where the ice began and we put on our crampons.” Due to the retreating snow and ice, we were still a quarter of a mile away.

Perhaps man’s meddling hands are just as evident in Iceland as anywhere else, only investigation and information are requisite to understand the interaction between inhabitants and the inhabited. Humans have always sought protection and comfort; only the means have changed over time, from cutting down trees for shelter and heat to bringing in money from tourists and aluminum smelters.

After discovering the nature of Iceland’s purple fields, I examined the abundant lupine along Lake Superior’s North Shore, the blooms I have admired since childhood. It turns out they too, are just an invasive species. Obstructing native plants, transferred with the wanderlust of mankind, the lupines tell a hidden tale of our altered surroundings. Iceland made me realize that sometimes even the places that seem wildest of all bear hidden scars. 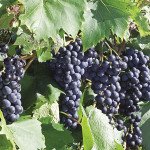 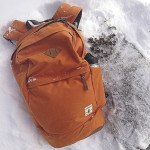