The wolves on Lake Superior’s Isle Royale are dying out. The national park’s most famous residents have dwindled to two related and aging animals that are unlikely to breed. It won’t be long until the wolves are no more. In the past, wolves have occasionally traveled to the island when an ice bridge forms to the mainland. As the climate changes, Lake Superior freezes over less often, reducing the opportunities for wolves to make the crossing.

Biologists warn that without wolves, the island’s moose will increase, over-browse their food supply and subsequently suffer a population crash due to starvation. To prevent that hypothetical scenario, some researchers have suggested stocking wolves on the island. Doing so would hopefully restore the predator-prey dynamic wildlife researchers have studied since the 1950s.

Late last year, the National Park Service released a draft plan to release 20 to 30 wild-caught wolves in the park over a five-year period. But doing so, an already difficult task, is further complicated by the fact Isle Royale is a federally designated wilderness area. By law, wilderness is supposed to remain “untrammeled by man.” Stocking wolves on the island may not meet that legal definition.

One person who thinks the Park Service proposal goes a step too far is Howard “Bud” Sivertson of Grand Marais. The 87-year-old artist and author grew up on the island, and works such as his book “Once Upon an Island,” can be viewed as an unofficial historian for the island’s commercial fishing era. In the past, he has served as a Park Service interpreter at the historic Pete Edison Fishery. In a letter to the Feb. 25, 2017 edition of the Cook County News-Herald, Sivertson summed up his concerns with a simple statement: “Neither wolves nor moose are indigenous to Isle Royale.”

Since the long-term study of wolves and moose is arguably the aspect of the national park with greatest renown, it may come as a surprise that both wolves and moose are a 20th Century phenomenon. Historically the island supported woodland caribou.

I sat down with Sivertson recently to learn more about his perspectives on the park. Sivertson told me his family’s roots on the island date to 1892, when his grandfather purchased land and built a fishing camp there. His family, and many others, traveled to the island during the summer to fish lake trout and whitefish, then returned to the mainland for the winter. He said in 1935 a Norseman airplane carrying “five National Park Service honchos” taxied into his grandfather’s dock. They made him a take-it-or-leave-it offer of $400 for about 50 acres of land, buildings and docks.

“They appealed to my grandfather’s patriotism and told him he was contributing to the creation of a wilderness for all of time,” he said.

His grandfather was allowed to remain on the property until his death, when it reverted to the national park. He could not pass the property on to his children.

“The Park Service took away my family’s heritage,” he said. “Deep inside, I’m angry about that.”

He told me this story as a preface to his observations about wolves, moose and wilderness. When his grandfather arrived at Isle Royale, it was populated with woodland caribou, which still remain on some islands on the Ontario portion of Lake Superior. This native species disappeared from Isle Royale early in the 20th Century, perhaps due to overhunting by sportsmen and settlers. Moose appeared around the same time.

Where the moose came from is anyone’s guess. The official Park Service website says the first moose swam to the island. This is possible, because around this time caribou were disappearing on the mainland, while moose were moving in to take advantage of young forest habitat created by early logging and resultant wildfires. However, local folklore suggests moose were stocked on the island with wild animals captured near Baudette. Some speculate the stocking may have been carried out by a hunting lodge on the island at the time as a replacement for the caribou.

Sivertson said the first wolves to appear on the island were “store bought” from a zoo in 1948-49. They were kept in a wire cage at the Pete Edison Fishery. When they got out of the cage, they began bothering campers and three out of four were shot and killed. The one that got away was named Big Jim and survived for several years.

Wild wolves crossed over on the ice in 1950-51 and became established in 1952. Since then, wolf numbers have rose and fell based on the number of moose available as prey. Over time, inbreeding has limited the ability of the wolves to perpetuate themselves, leading to the present dilemma of pending extinction on the island.

Should we allow that to occur? Or should we stock wolves on the island? For Sivertson, the answer is clear.

“The wolves there now are genuine, they came on their own,” he said. “As soon as you capture a wild wolf, it is no longer wild. As soon as you release that wolf on Isle Royale, it becomes a captive, because it can’t get off the island. I think that conflicts with the idea of Isle Royale as a wilderness untouched by man.”

He believes the National Park Service is facing pressure from the wildlife research community and tourism promoters, because both groups benefit from the continued presence of wolves on the island. If the wolves disappear, so, too, will the well-publicized predator-prey research project begun in the 1950s.

But what about the moose? Without wolves to keep the population in check, they will likely damage the island’s vegetation due to over-browsing and die off due to starvation.

“What would happen in a primeval wilderness?” Sivertson asks rhetorically. “Let the chips fall where they may. Let the wilderness manage itself. It is egotistical to think we know more than the wilderness.” 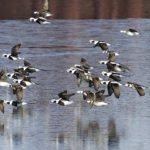 Sea ducks on the unsalted sea

On the St. Louis River, past politics made a difference