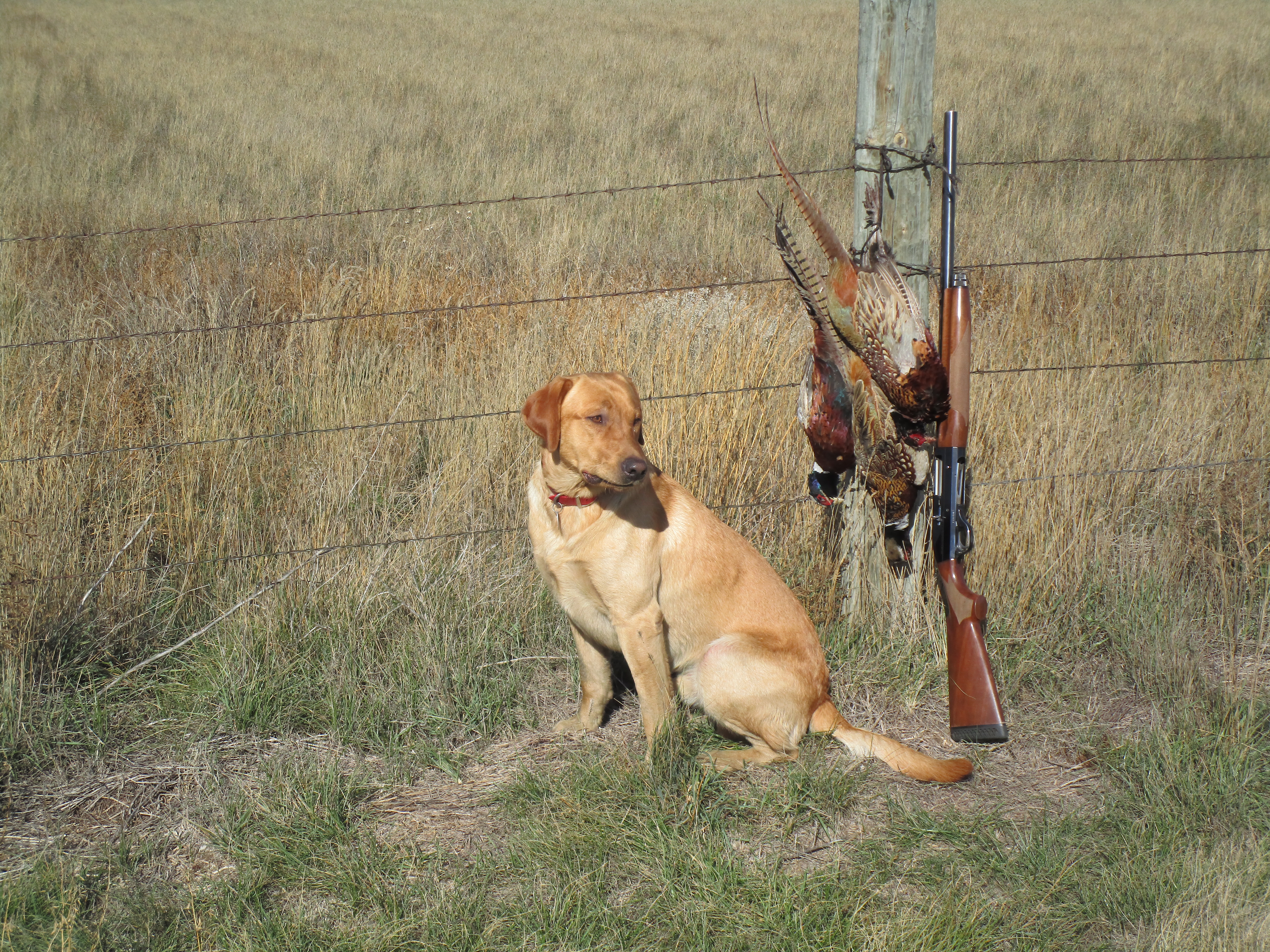 On a sunny October day, the Dakota prairie is a pretty fine place to be. We enjoyed sunshine and warm breezes on a recent pheasant hunt. One afternoon the weather was so nice that we took a long midday break to avoid overheating the dog.

That dog, my young yellow Lab Rainy, was having the time of his life. My old Lab, Tanner, is having some difficulty breathing when he works hard and had to stay behind. For the first time, Rainy was star of the show. He acquired plenty of hunting experience as a pup last year and from grouse hunting this fall, so he was up to the task. I wasn’t surprised with his admirable inaugural performance. Pheasants beware!

The prairies were droughty dry, so we mostly found pheasants near water. Rainy pushed through cattails and other heavy cover like a champ, fueled with the boundless energy possessed by young Labs. In his newly assumed role as “big dog,” he hunted close, flushed pheasants aplenty and retrieved the birds we knocked down.

I was having a good time, too. During September, I had cataract surgery performed on both my eyes, which removed what had become a very hazy view of the world. So hazy, that if you passed me on the street or in the grocery store last summer, I likely wouldn’t have recognized you.

“I’m just enjoying looking across the landscape,” I told my friend as we headed out for our fourth day of hunting. It was great to spot a deer standing in a far pasture or identify a flock of ducks on a pond. Good vision is something most of us take for granted. Losing a clear view of the world around you is a humbling experience.

As someone who has worn eyeglasses since third grade, it’s been strange to suddenly not need them anymore. The surgeon replaced the cloudy lens in my eyes with silicone implants that provided me with near 20-20 vision, although I do need “cheaters” for reading and close work.

When outdoors, my eyeglasses served to some degree as safety shields. For instance, I’ve found it is much easier to get poked in the eye by twigs when you are busting brush for grouse without glasses. For the Dakota trip, I purchased a cheap pair of sunglasses primarily for eye protection, with the intention of getting better ones after my post-op visit with the surgeon.

For some reason, I forgot to put the sunglasses on when we left the truck to hunt a brushy creek bottom. Maybe that’s why I missed an easy shot at a rooster that flushed from an overgrown bend in the ravine. It’s as good an excuse as anything else. Unfortunately, that was our only chance at a pheasant along the creek.

When we reached the end of the ravine, we saw a promising grove of cottonwoods a couple of hundred yards away. We decided to push through the trees. We were nearly to the grove when I suddenly felt something in my left eye, which was still healing from surgery three weeks previous. I stopped and blinked a few times, hoping the eye would tear up and flush whatever was in it. That didn’t work.

Instead, my eye became so painful that I couldn’t open it. It actually felt even better when both eyes were closed.

“I’ll have to go back to the truck,” I told my friend, “but we might as well push through the trees since we’re here.”

I started forward with one eye half open, walking when I could with both eyes closed. We went through the trees without flushing a pheasant, but there was a promising clump of willow brush just ahead. We decided to check it out. My friend took one side while I took the other, with the dog working the cover. Of course, a flock of pheasants was hiding there and of course they flushed in front of me.

“There’s a rooster,” my friend called, “and there’s another.”

A minor eruption of pheasants occurred well within range for me. I later learned at least five were roosters. With one eye half open I took a poke at one with a predictable result. My painful; predicament didn’t improve my shooting prowess.

The pain in my eye wasn’t letting up, so we headed for the truck. I marched across the prairie with both eyes closed, squinting occasionally with my good eye to make sure I didn’t stumble in a badger hole. At the truck, I handed the keys to my friend. For me, driving was out of the question. I’m not sure what I would have done if I’d been alone.

We went back to the motel where I laid down for an hour hoping the pain would pass. It didn’t, so we walked next door to the medical clinic (gotta love those small towns). The receptionist sent me straight to the nurse, who sent me straight to the doctor. He applied some numbing drops so I could open my left eye. A careful examination revealed no foreign object, but the entire eye was scratched and irritated. He said the culprit could have been just a speck of dust.

Back at the motel, I laid with both eyes closed, listening to several episodes of some reality show about gold miners who spent far more on heavy equipment than they recovered in gold. I was still unable to open my eye the following morning. In fact, it was excruciatingly painful to open my good eye. We packed the truck and headed for home. By evening, I was finally able to open my eyes, though an occasional shot of pain would force me to close them again. I stayed in Duluth that night and, feeling somewhat better the next morning, drove the final three hours home.

My eye still aches as I write this, but the pain is far less intense. In a lifetime of hunting and fishing, this is the first time I was injured in the field. Fortunately, my friend rolled with the punch and wasn’t upset that we lost two days of hunting. I’m still wondering how I would have handled the situation had I been hunting alone, as is often the case. Rainy may be a heck of a bird dog, but I don’t think he knows how to drive the truck.

Points North: Soon, the anticipation will be over