Two important events will occur in the coming week. Let’s talk about the one folks are eagerly anticipating with hope and a promise of something better than today: Saturday’s Minnesota deer opener. Nearly a half million hunters will head out that morning for some quiet time with the chickadees and the chance to secure a winter supply of venison.

Something about the opening day of deer season makes it a bigger deal than, say, the May fishing opener. Maybe it’s because most anglers don’t head out expecting to catch the fish of a lifetime. But in the mind’s eye of every opening day deer hunter is a trophy buck, even if they know actually seeing such an animal is a long shot. But a big buck is most likely to make a mistake on that first day, before he realizes hunting season has begun. On opening morning, every hunter’s chances are equal.

I shot my first deer on opening day, although I’d hunted through a few seasons before doing so. Not long after daylight, the buck came sneaking by a stand I’d scouted and built myself. I didn’t see the eight-pointer until he was nearly under my tree. That morning I became a deer hunter.

Every opener since then, I’ve expected the same thing to occur, although it rarely does. I recall killing a doe perhaps the first year that I drew a doe permit. Then there was a difficult shot on a forkhorn trailing a doe many years later. And then there was another doe, but we’ll get to that.

Last year, I didn’t see anything on opening day, which isn’t unusual for me, and killed a buck the next morning. Over the years, I’ve shot deer at all times of day on virtually every day of the 16-day firearm season, including an exceptional buck taken in the final minutes of the last day. This observation just points to a basic truth: spend enough time in the woods and you’ll eventually have a chance to shoot a deer. It’s up to you to make the most of that chance.

On two memorable openers, the buck got away. The first time was by choice. It was 2004, about a week after my father, my longtime deer hunting partner, died of cancer. I happened to be walking down a paved road toward the truck when a buck crossed ahead of me, more than a quarter mile away. I knew there was an old deer stand in the woods not far from where he crossed. I hustled down the overgrown logging road where the truck was parked to get there, hopefully ahead of the buck.

Quietly climbing into the stand, I made a couple of quiet grunts with a call. Immediately, the buck appeared. It was an eight-pointer with a rack that was not quite as wide as his ears. The forest was relatively open around the stand and buck was in no hurry. With the crosshairs on his vitals, I watched him for several minutes and never pulled the trigger. Why? I don’t know. Maybe I’d had enough of death already that fall.

My hunting partners were unanimous in their assessment of the situation. “You’ll pay for that,” they said.

And I did. It was four years before I killed another whitetail, the longest dry spell in my hunting career. Finally, a deer stepped out as I was sneaking through the balsams on an opening morning. It was close, maybe 25 yards away. I could see the body clearly, but not the head. The animal was good-sized. There was a bonus doe tag in my pocket. I decided to shoot it and break my run of bad luck.

The deer turned out to be the aforementioned doe. Two other deer bounded off when I approached the downed animal. I leaned my rifle against a tree trunk and prepared to field dress it. Then I heard a sound. Out stepped a big buck who was investigating all of the commotion. Our eyes met. We were perhaps 30 feet apart. My rifle was a step and a grab away. I went for it. With one bound the buck vanished into the brush. All I could do was smile.

I don’t know what will happen on opening morning. What I do know is that I’ll be out there. Maybe it will be the day when Mr. Big steps into view. If he doesn’t, I have 15 more days to go. That’s plenty of time to cross paths with a buck.

This year, our hunting party is down to two members. On the night before the opener, we like to talk big and say that we’ll shoot our deer the first weekend and then celebrate by using the extra time we’ll thus have to go pheasant hunting. So far, we managed to do that once. Often we hunt right up to the end of deer season. That’s okay. As my friend likes to point out, deer season is the only time you get to roam the northern Minnesota woods carrying a big gun.

Many, maybe most, of today’s deer hunters expect deer hunting to be convenient, comfortable and easy. They spend their time sitting box, be it a tree stand or a ground blind that is essentially like a rustic (or maybe not so rustic) version of their living room. That ain’t my cup of tea.

Deer hunting ought to be, well, hunting. The white-tailed deer is widely considered to be one of the world’s most elusive big game animals. To treat the animal or the opportunity to hunt it as any less than that belittles not the deer, but you. If you want to sit in a box and wait for a deer to be drawn to your artificial attractants such as scents or food plots, so be it. I’ll do my best to steer clear of you.

At the end of opening day, I’ll likely be chilled, wet, tired and hungry. And regardless if I shoot a deer, I’ll have stories to tell about the day’s adventures. And that’s why I can hardly wait for opening day. 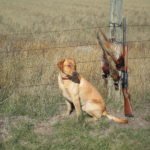