With a name like “kiwi” we would assume this fruit originates from the picturesque country of New Zealand, but, the kiwi comes from the Yangtze River Valley and Zhejiang Province of northern and eastern China, where it was called Mihou Tao and Yang Tao, or “sunny peach.” The kiwifruit grew in forests on woody vines that could reach heights of 12 feet and cover an area 15 feet wide.

According to a study by Purdue University, “It was cultivated on a small scale at least 300 years ago, but still today most of the 1,000-ton crop is derived from wild vines scattered over 33 of the 48 counties of Zhejiang. The plants may be seen climbing tall trees or…sprawling over low scrub or rocks exposed to strong northeast winds and bearing heavily.”

Traditionally, the kiwi was not eaten as we do today, but primarily used as a tonic for growing children and as an aid for women after childbirth. At the dawn of the 20th century, New Zealand missionaries in China discovered this succulent fruit and brought it back with them to their home country. It was there that growers then developed it into the standard kiwi that we see in our grocery stores today. Though the New Zealanders had a rather robust crop, and pretty much cornered the market on kiwi export, it didn’t make its way to America until the 1950s. In its early days, it had many names; melonette and Chinese gooseberry were the most popular. In order to make their healthy crop into something more marketable overseas, the New Zealanders named this fruit the “kiwi” which is a Maori word for the nocturnal, flightless bird unique to their country. It was not until 1970 that the first successful crop of kiwi was established in America. Currently, we rank tenth in global production of this fruit, and although New Zealand and Italy have pretty much run the show when it comes to production, in the past few years China has emerged as the number one grower of the kiwi.

This small oval fruit is covered in small brown hairs, is succulent green to pale yellow inside and has tiny black seeds. Although there are over 60 varieties of kiwi, what we primarily see in the grocery store is the Hayward variety. Unfortunately, kiwis are not a fruit that would flourish in a Minnesota climate, although there are some very small varieties such as the ‘kiwi berry,’ that have proven hardy to colder climates. The kiwi needs plenty of water and is finicky about temperature. According to the California Rare Fruit Growers, Inc., they need a growing season that can render 240 frost-free days and they do not like early frost in the fall, preferring a gradual decrease in temperature as opposed to the abrupt drops we see here. Relatively free of pests, it is typically inadequate watering that has the most detrimental effects on growth. One odd pest to the kiwi vine is the common cat. The young shoots smell much like catnip, so cats are prone to rubbing on them, therefore potentially destroying the crop.

The kiwi is a tremendously nutritious fruit. It is high in vitamin A, including carotenoids such as lutein and zeaxanthin that have been reported to decrease progression of macular degeneration. The pulp also contains almost all the recommended daily value of vitamin C. In addition, it is a great source of vitamin E and K, minerals such as potassium and magnesium, and the seeds contain some omega-3 fatty acids. Kiwi can be served raw (with or without the brown peel, which is edible), juiced or used in baked goods. It’s important to keep in mind that kiwi’s contain the enzyme, actinidin. This enzyme is commercially used as a meat tenderizer, which means it breaks down proteins. This is important to keep in mind when combining kiwi with any dairy product, as it will coagulate if not consumed immediately. It is this action that brands kiwi an aid to digestion as this enzyme can also help break down protein from meat and dairy if consumed in tandem, possibly reducing the bloating or fullness felt after consuming a protein-rich meal.

Fortunately for us, kiwis are quite prevalent in our grocery stores year-round. Since it can flourish in both hemispheres—available to us from California starting in November and ripening in New Zealand through May—we are able to enjoy this nutritious fruit almost any time of the year.

Brie Glazed with Kiwi
Recipe From The California Kiwi Commission

Place cranberries, currants, brown sugar, cloves, ginger root, allspice, mustard and water in a medium saucepan. Cook gently over medium heat until mixture comes to a boil. Reduce heat to low and simmer the mixture until the cranberries swell and the liquid thickens into a jam-like consistency, about 8-10 minutes. Remove from heat and allow to cool completely. When cool, stir in the chopped kiwi and pecan pieces.

Preheat oven to 350 degrees F. Place the whole brie on a parchment-lined cookie sheet. Spread cooled kiwi-cranberry marmalade over the top of the brie and coat edges evenly. Bake in the preheated oven for 25-30 minutes, or until the brie round swells. Remove from the oven and gently slide the brie onto a cheese board or plate. Serve immediately with crackers. Serves 12. 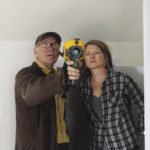 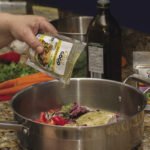 Finding Flavor with Herbs and Spices