Imagine if the deer disappeared from your hunting area. Think what it would be like if you went for a walk after a fresh snow and were unable to find a deer tracks. What if no one in your hunting party saw any tracks either? Some friends of mine who hunt along the Marshall Truck Trail north of Duluth are faced with this situation.

“We haven’t shot a deer in three years,” says Craig Sterle of Cloquet. “We haven’t hardly seen deer in that time.”

Sterle and his party are hardly johnnies-come-lately to deer hunting or the country they hunt. His family has had a hunting shack on the west end Marshall Trail since at least 1929. A retired DNR forester, Sterle is a woodsman. The rest of his crew are experienced hunters, too. But you can’t hunt what doesn’t exist.

“We can go long periods in space and time without seeing a deer track,” he says.

So, what is going on? Sterle believes it’s a matter of habitat loss that has occurred over the last two decades. A mature, mixed forest was harvested over a period of several years and the cutovers were replanted to red pine. As the plantations grow, they shade out nearly all other vegetation and carpet the ground with a deep layer of pine needles. A red pine plantation is essentially an ecological desert; a monoculture of trees. In terms of producing a forest product, this is an expedient way to do so, but a red pine plantation does not sustain forest resources, such as wildlife.

As a retired forester, Sterle doesn’t think state and county foresters who manage the area have a nefarious plan. It is simply a good upland site for growing pines. As harvest blocks were cut, planting them to red pines made silvicultural sense. He estimates that about three sections (three square miles) where he hunts are mostly devoted to red pine plantations.

In northern Minnesota, logged or burned areas are often allowed to recover on their own. This process, which foresters call natural regeneration, results in a mix of tree species that usually includes aspen, birch, balsam, spruce and other tree and shrub species. The resulting forest provides food and cover for an array of wildlife, including game species such as deer and ruffed grouse. Most northern Minnesota hunters are familiar with these forests.

Artificial regeneration occurs when foresters deliberately plant trees on a site. Sometimes, this is an aerial seeding of black spruce or other species. At other times, it is the planting of seedlings, usually conifers, by crews of Latin American migrant workers. Sometimes these plantings are sprayed with chemical herbicides to kill naturally regenerating trees and shrubs, or invasive plants such as thistles.

Some plantations provide better wildlife habitat than others. In my experience, white spruce plantations can provide good cover for whitetails. I’ve had good grouse hunting in young red pine plantations intermixed with aspen, birch and other trees and shrubs. Eventually, though, the growing red pines shade out the other species and no longer attract grouse.

While conifer plantations date to at least Civilian Conservation Corps era of the 1930s, we may now have an increased emphasis on artificial forests. Oddly, a motivation for more pine planting stems in part from ecologists who want more emphasis on coniferous forests, particularly in northeastern Minnesota. This is because prior to European settlement and early logging, the northern forest contained more conifers such as white pine and white cedar. It was also a forest that was largely absent of white-tailed deer and moose, instead supporting woodland caribou. Foresters now struggle to grow white pine and white cedar, because they are like candy to browsing deer.

Meanwhile a few miles away on the east end of the Marshall Trail (which is reached via a different road system because a bridge is out), another hunting party is having poor luck for a different reason, extensive logging since 2008 has created a large area with little deer habitat. Bob Kirsch, a retired DNR wildlife manager and forester who has a hunting camp there, says he didn’t see any deer last fall, although he did see five moose in the huge cutover.

“I guess that goes to the theory that big cuts create moose habitat,” Kirsch said.

He doesn’t fault foresters, because the area in question is remote and therefore was one of the last places to be harvested. The over-mature trees were dying of old age, leaving foresters little time to act via harvesting. After the first cuts were completed, Kirsch’s party experienced a few years of good hunting, because the deer were using the mix of newly disturbed (logged) areas and the remaining old forest. But once the entire area was logged, the deer no longer had adequate cover. Much of the cutover is being planted to white spruce, with some areas naturally regenerating to aspen. Kirsch says he is reluctant to make predictions about what the future habitat, and deer population, will become.

Neither Kirsch nor Sterle blame wolves for the lack of deer in their hunting areas. The country north of Duluth has always contained wolves. Their numbers rise and fall with the abundance of deer, their primary prey. Now that deer are few, so are wolves.

Both men were also quick to point out deer hunting is rarely easy along the Marshall Trail. They say the 70s and 80s were an era when hard winters and maturing forests combined to reduce deer numbers. While their hunting parties continued to hit the woods every season, they were lucky to get a deer or two. The pendulum swung the other direction during the 1990s, when a strong demand for forest products led to increased harvesting. Now it has swung yet again, as conifer plantations begin to grow.

It is possible that you don’t have to travel very far from the Marshall Trail to find good, or at least better, deer hunting. But what is happening there also provides a cautionary tale. In the face of changing management strategies and priorities, yesterday’s forests may be very different than the forests of tomorrow. Plans to increase the conifer component of northeastern Minnesota forests may mean more planting of commercially valuable pines and less natural regeneration of the deciduous species that are essential habitat components for game animals such as deer, moose and grouse. While biologists are talking about management intended to favor moose over deer in the portion of the northeast considered the moose range, it remains to be seen how that will play out on the ground. Right now, we have significantly fewer moose and deer than we had 20 years ago. The only thing we really know is this: when it comes to natural systems, the only constant is change. 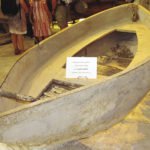 Vessels made of Ice and Concrete 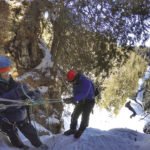