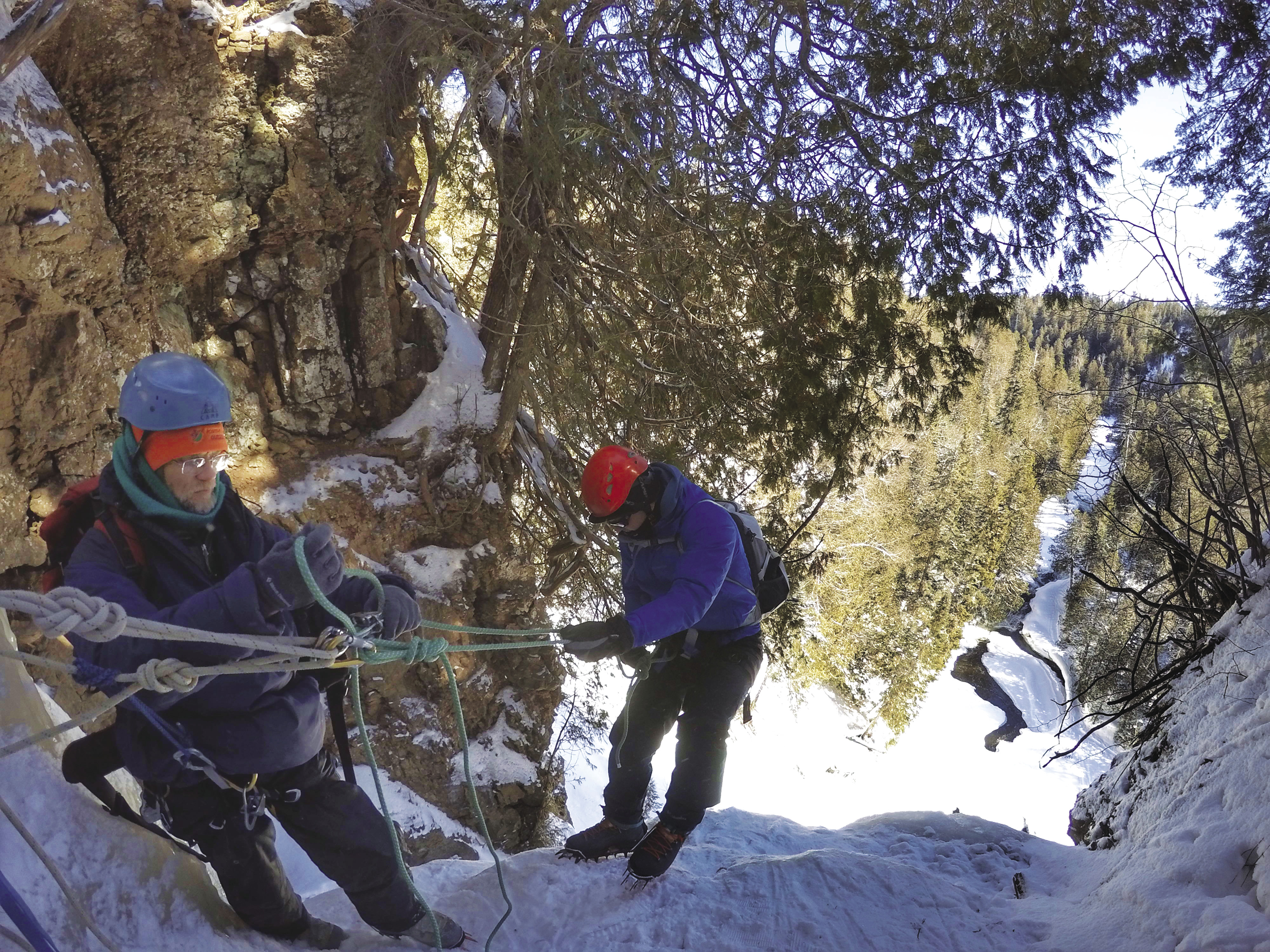 Blake Cazier builds an anchor before rappelling to the bottom of the icefall. | ERIC LEE

A day on Cascade Icefall

LUTSEN—Ice climbing on the North Shore is a rewarding adventure that’s fun for newbies and veteran climbers alike. It’s a technical sport, emphasizing healthy risks and natural spaces. With the area’s beautiful landscapes and numerous waterfalls, there’s nothing like ice climbing to snuff-out the cabin fever. On sage advice, our guided climb at Cascade Icefall was one-part personal growth and two-parts renewed appreciation for the Northern Wilds.

Blake Cazier is a veteran climber on the North Shore area. He is also co-founder of Positive Energy Outdoors, a non-profit offering guided tours and educational opportunities that celebrate the outdoors. They host everyone from young children to corporate executives, and next to dog sledding, ice climbing is their premier winter adventure. “Ice climbing along the North Shore is becoming popular for climbers from the Twin Cities to Thunder Bay,” says Cazier.

Cascade River and Gooseberry Falls are on Cazier’s short list of ice climbing sites, so Cascade Icefall is where he would show us the ropes. The area is rocky and rugged, with parts of the gorge getting spotty sunlight at best. If the conditions are right, it can be a popular place for ice climbers. The falls are first-come first-serve, so it’s best to get an early start. Without hesitation, we made plans around the favorable weather forecast.

We met Cazier the next morning, just south of Cascade River State Park. The sun glistened in the sapphire sky with temperatures hovering around zero degrees F. After a careful jaunt through deep snow, we laid eyes on the stunning scenery overlooking Cascade River. All at once we had perspective. The size of the gorge and the scale of the icefall was a testament to its dominance. It was a moment of serenity. We weren’t far from the highway, but it seemed miles from civilization.

First up: a static line traverse lowering us to the canyon rim. The deep snow and narrow ledge made building an anchor challenging. Cazier used a combination of trees and ice screws to build a bombproof anchor atop the 70-foot wall of ice. Each of us had to rappel down the frozen waterfall before attempting the climb on top-rope belay. If we couldn’t climb the ice, then hiking out upstream would be another adventure altogether.

Pressure mounted as we gathered at the bottom of the frozen precipice. With bulky clothing, crampons, and ice axes, it was a different realm than rock climbing. Cazier encouraged focus and balance while swinging the ax just right, “careful not to nick the ropes with sharp tools.” It was an exercise in self-control and calmness of mind. We found ourselves consumed with the experience—not thinking about tomorrow, taxes or the tedium that makes everyday life so feverish.

We climbed multiple routes on the shadowy ice until early afternoon, soon relishing in the glory of a successful adventure. “Overcoming the unknown and reflecting on the physical, social, and natural interactions is the stuff of lifelong memories,” Cazier said. And while things don’t always go as planned—like bruised knees or ripped clothes—having the ability to work through the unexpected is an important part of personal growth.

Ice climbing holds a spirit of adventure like few other winter sports. It’s technical, demanding, and concentrates the mind. It’s gratifying, too. Climbers of all stripes should visit icefalls, and joining other climbers is a good way to find new places, create lasting memories, and snap great pictures—all under the spell of the North Shore’s magical landscape.—Eric Lee

When you can’t fish flies, tie them