Earlier this winter, Dave Ingebrigtsen, the longtime DNR assistant wildlife manager in Grand Marais, retired. Since his office was a one-man show, his work area is now covered by the Two Harbors office, which is nearly two hours away. We can hope this is a temporary situation, but this retirement adds to an extraordinary list of Section of Wildlife position vacancies across the state.

Section of Wildlife chief Paul Telander confirmed there are about 40 vacancies in field and regional offices, as well as the St. Paul headquarters. These vacancies have been accumulating for several years and are tied to declining revenues in the Game and Fish Fund. Fueled primarily with hunting and angling license revenues, the fund was projected to be at a zero balance this year. This is part of an ongoing cycle. On average over recent decades, about every five years, when the Game and Fish Fund dwindled to the point where the fund balance was projected to go to zero, the Legislature raised license fees to reinvigorate the fund with cash. These fee increase efforts have been coordinated with the DNR and conservation organizations. The most recent fee increase passed during the 2017 legislative session and began taking effect March 1, the start of the new license year.

However, the Section of Wildlife won’t see new dollars until 2019 at the earliest. The DNR can’t spend the money until it is appropriated by the Legislature, which does so on a biennial basis. That will occur in the 2019 legislative session if the legislature decides to make the new money available for the following fiscal year. In the meantime, retirements have and will continue to free up some money and allow 15 positions to be filled. The remaining open positions will stay that way until more money is available.

It is fair to ask, if no one is on the job, how does the work get done?

“You do the best you can and focus on core activities,” says Telander.

High priorities for the Section of Wildlife include land and water management. The DNR has 1,400 Wildlife Management Areas totaling 1.3 million acres. Maintenance and improvement of WMA habitat and infrastructure is largely done by field staff. Population management, the setting of hunting seasons and regulations is another priority. So, too, is disease management, such as grappling with southeastern Minnesota’s outbreak Chronic Wasting Disease. Another priority is addressing wildlife depredation and nuisance issues.

What goes lacking when a field station is unoccupied is some of the boots-on-the-ground work, as well as interaction with the public. Frankly, as a hunter, I’d much rather have decisions about the allotments of antlerless deer tags, bear permits and the like originating from a biologist who works and lives in the area. The same is true for field work such as spring breeding counts of grouse populations. Not to mention there is public relations value to having a DNR wildlife expert in a rural community.

In recent years, the Section of Wildlife has also received a windfall of funds from another revenue stream: Pittman-Robertson. These monies are collected an excise tax on guns and some hunting gear, which is then distributed to the states based upon the number of licenses hunters. Strong sales of guns during the Obama years led to a significant increase in P-R funding.

Minnesota has been receiving $12-20 million annually in P-R funding, said Heather Kieweg, federal assistance coordinator for the Section of Wildlife. These amounts were actually less than what was allocated for the state, which can “bank” some of its apportionment for future allocations. The DNR made a strategic decision to not increase long-term staffing based on the additional P-R revenues, reasoning the extra funds could be the result of a temporary spike in firearms sales. Since President Trump took office, those sales have decreased somewhat.

States must spend P-R funds on wildlife, defined as mammals and birds, as well as hunter education and public shooting facilities. Kieweg said the DNR generally targets PR funds to WMAs, wildlife research, population management, and technical guidance to other land managers. P-R dollars must have a 25 percent state match. The monies also must be spent first and then are reimbursed by PR funds, which thus relies on the legislative appropriations process. Since P-R funding is based upon the sales of firearms and related equipment, which seem to be influenced to a significant degree by politics and current events, it is difficult to project how much federal money the DNR may receive in future years.

Another increasing difficult projection is future hunting license sales. While activities such as deer hunting remain very popular, the pursuit of small game, including ruffed grouse, pheasants and waterfowl, continues to decline. Telander says the agency is trying to address this problem with recruitment and reactivation efforts. This means trying to encourage new hunters to take up the activity and to motivate those who have given up hunting to get back into it.

Since license sales are the primary source of DNR wildlife management funding, failing to attract new hunters and maintain existing license sales could have serious consequences. The Division of Fish and Wildlife has a strategic planning effort underway that considers how it will address declines in hunting and fishing participation and what the Division will look like in the future. Nationwide, there is an effort to develop a new federal funding source based on appropriations of royalties from energy extraction on public lands and waters. Presently, this effort is known as Recovering America’s Wildlife Act and is intended to provide money for more broad-based wildlife management than just game species. It is uncertain whether this plan will make it through Congress.

So, what happens if hunting fades and no additional federal funding is forthcoming?

“If hunters drop off, there will be less money for our operations,” Telander says. “That will change how we do our work.”

It is not difficult to imagine a future with fewer hunters and a general public that has less appreciation for Nature and takes wildlife for granted. You might say we’ve already begun walking along that path. Unfortunately, it takes little imagination to envision a DNR Section of Wildlife with a dwindling workforce that faces a growing challenge to maintain healthy wildlife populations in the face of increasing development and public (and thus political) indifference. We’re taking steps along that path, too. 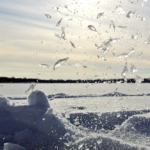 Life Under the Ice 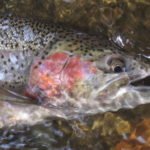 The end of the Kamloops rainbow