A recent story in Outside magazine had strong words for the outdoor industry and its lack of commitment to addressing outdoor issues, such as threats to our public lands.

“The whole outdoor industry is just run by a bunch of weenies. And they are not stepping up. They just suck the life out of outdoor resources and give nothing away.”

The quote was from Yvon Chouinard, the 78-year-old founder of Patagonia, a company known in outdoor circles for its willingness to roll up its sleeves and fight the good fight for the outdoors. He was commenting on the Outdoor Retailers Association’s decision to pull its annual (and locally lucrative) trade shows out of Salt Lake City, in protest of the Utah Congressional delegations opposition to the new Bear’s Ears National Monument and ongoing efforts to turn over federal lands to the states. The industry made a strong statement to the outdoor recreating public by doing so, but failed to sway the Utah delegation. Most importantly, it was the industry’s single shot in an ongoing war over the use and abuse of the nation’s public lands and the natural resources they contain.

Patagonia stands apart from nearly all manufacturers and purveyors of outdoor products, because it adheres to a profound mission statement: “Build the best product, cause no unnecessary harm, use business to inspire and implement solutions to the environmental crisis.” The company’s catalogs are like a lavish outdoor magazine, with stories and photos about adventuring in exotic locales and solid reporting about environmental issues from across the globe. It’s a savvy marketing strategy, suggesting to customers that they, too, can be globe-trotting adventurers and save the planet to boot. But, as the Outside story clearly points out, Chouinard is serious about the company’s mission. He’s not sure other industry leaders share his passion for his point of view.

We ink-stained wretches (that’s an old school definition for reporters) who follow outdoor issues sometimes wonder why the outdoor industry doesn’t step up to the political plate more often when natural resource policies are bad for business. For instance, the loss of millions of acres of Conservation Reserve Program (CRP) grasslands across the Upper Midwest undoubtedly had a chilling effect on the sales of hunting products. Prior to the loss of CRP, upland hunters used to shoot a million rooster pheasants in Iowa every autumn. Now they kill about 10 percent of that amount. The lost hunting opportunities had to result in significant declines in the sales of everything from shot shells to hunting apparel. In South Dakota, hunting licenses sales have fallen off as increasing agricultural development has led to a decline in pheasant numbers and tarnished the state’s self-proclaimed title of pheasant capital of the world. If hunters aren’t buying licenses, they also aren’t purchasing hunting gear.

CRP and the loss of hunting opportunities are but a microcosm of the outdoor industry as a whole. The big picture includes everything from boating (both salt and fresh water) to hiking, climbing, birding and all sorts of activities that take place in fresh air. According to the Outside story, the outdoor industry is worth $1 trillion, which means it should have the financial and customer clout to make a political difference. So why don’t more companies act like Patagonia?

The simplest answer is most businesses avoid taking political positions because they don’t want to alienate their customers. But that isn’t a wholly satisfactory explanation, because other industries often point out to politicians how new or changing policies will be detrimental to their bottom line. Such dollars-and-cents testimony can influence political decisions.

Another answer is the outdoors industry is tribal. Hunters and anglers are one industry segment. Hikers and paddlers are another. Then there are motorsports enthusiasts, climbers, mountain bikers…the list goes on. To the best of my knowledge, there is no collective outdoor industry trade organization that brings all of these tribes together. Even worse, there is incessant infighting among the various tribes. Paddlers don’t like motor boaters. Fly-fishers spurn those who use bait. It is impossible to discuss significant issues when you spend your time picking nits. While here in Minnesota we do a pretty good job of getting varied outdoor interests to sit down at the same table and discuss at least some issues of mutual concern, this doesn’t happen on a national level.

Even if the outdoor industry was unified on a national scale, it would remain a relatively small fish when compared to some of its primary opponents, such as the oil and gas industry, which works on multiple fronts to ease restrictions on energy extraction from public lands. Petroleum producers have far deeper pockets and far more political influence that the outdoor industry.

But the Outside story explains that what the outdoor industry lacks in corporate political clout it makes up in human capital. Lots and lots of people enjoy the outdoors. More than a few are willing to speak up to defend it. One example was Utah Rep. Jason Chaffetz’s attempt earlier this year to transfer millions of acres of federal lands to the states. The strong backlash from hunters and anglers convinced him to withdraw the bill.

That doesn’t mean the issue has gone away. The special interests who covet our public lands will try again, all the wiser from their previous defeat. The coalition defending public lands is presently strong, but lacks the lobbying power and corporate support of its opposition. Public lands contain a great wealth of extractive resources, which means that opposition relentlessly stays focused on the ultimate prize.

If more outdoor industry leaders step into the political arena with the likes of Chouinard, will they make a difference? Probably, but not enough that outdoor lovers can wipe their collective brow, declare victory and go fishing. The battle never ends. It is human nature to fight ceaselessly over the control of territory. Outdoor issues nearly always are defined as struggles for that control. As long as there are people, that struggle will continue. 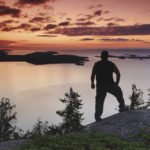