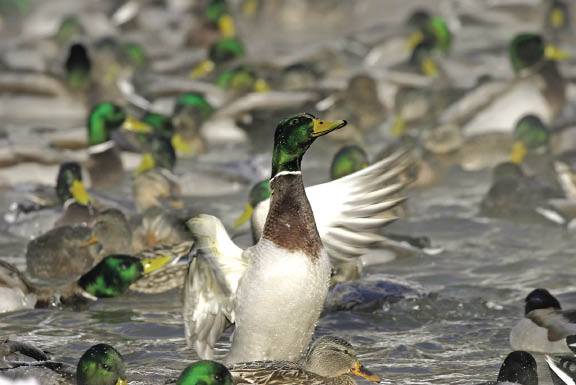 It may seem strange that the Northern Wilds would be a place to see and photograph waterfowl in winter. After all, don’t they migrate south for the cold months?

Most do. By the end of November, the majority of ducks and geese have long departed for warmer climes.

But mallards, and the closely related black duck, are also opportunists. These species are comfortable feeding on land, and as long as there is something to eat, and some water on which to roost, many will stay as far north as weather allows. In recent years, I’ve photographed and watched large numbers of mallards and black ducks wintering along Lake Superior, especially near Duluth.

Sometimes there are rafts of a thousand or more right off shore of downtown Duluth, often riding out large seas and flying daily to the port’s grain elevators to feed on spilled corn and wheat. Although it may seem strange that they’d choose to endure subzero temperatures, they must find an advantage in remaining here. Perhaps they find the rigors of winter an acceptable trade-off for the rigors of migration.

Open pockets of water on regional rivers also sometimes host these species. I’ve even found them on the ponds at the French River Hatchery on the North Shore.

How is it they can survive our winter? If you’ve ever worn a down parka, you know the insulating value of duck down. As long as they have food to fuel their body, they can tolerate our coldest weather. And as for those bare legs and feet, they are well adapted to more than just swimming. Waterfowl use them as a means of thermo-regulation. In very cold water, or when standing on ice, they constrict the amount of blood flowing to these extremities, preserving body heat. Even though the body temperature remains unchanged in cold weather (ranging from about 99-103 degrees Fahrenheit), the temperature of the feet drops to a few degrees above freezing.

Winter also sees species that migrate to the northland. Without fail, common goldeneyes show up on Lake Superior in November and remain throughout the winter. This hardy duck, which nests in tree cavities from northern Minnesota northwest to Alaska, is a diving duck, which means they feed below the water’s surface. They love to eat mollusks, and may have benefited by the proliferation of the invasive zebra mussel. When they find a bed of mollusks, they will stay over it for days on end until it is depleted.

One of the best places to see them (and the occasional related Barrow’s goldeneye) is the ship canal entering the harbor at Duluth. At times, thousands of goldeneyes feed in the canal, diving along the concrete piers, plucking zebra mussels from the walls. When startled, they flush en masse. The sound of their wings is distinctive; the hunter’s colloquial name for them—’”whistler”—derives from it.

The observant winter waterfowl-watcher may see one or two other especially rare species. Nearly every winter a handful of long-tailed ducks (formerly called “oldsquaw”) and harlequin ducks are spotted in the Grand Marais harbor, or in Two Harbors. These sea ducks nest in the Arctic, so our winter is nothing stressful for them.

With the hunting season long over, the ducks that winter here tend to be tolerant of people. Because pair selection in ducks begins in winter, you might also be treated to some of the displays the drakes perform to impress the hens. As a bonus, the drakes are in their full “nuptial” plumage and are strikingly beautiful in winter.

If, like me, you love the sight and sound of waterfowl, winter may actually be one of the best times to view and photograph these species. Head toward the big lake, or open rivers, and you may be surprised by the number of ducks you see.

Editor’s Note: This story was originally published in the December 2010 – January 2011 issue of Northern Wilds Magazine. 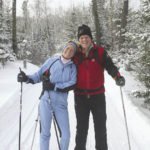