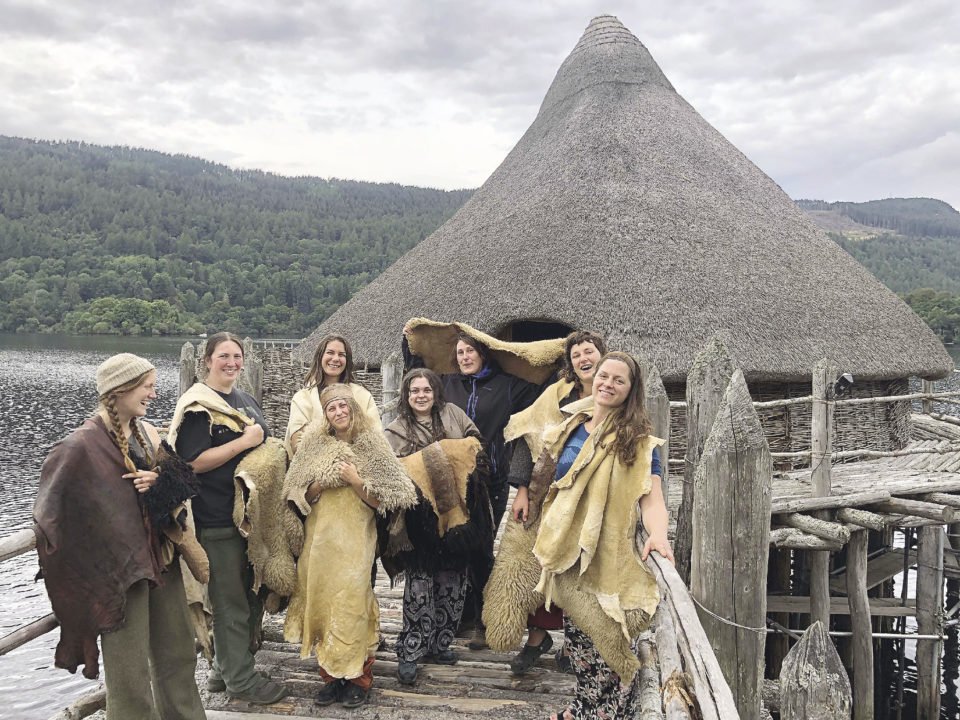 Showing off our tanned deer, sheep and fish skins along the walkway to the Crannog. | LUCY SKINNER

A light mist hung in the air as I disembarked from the train at Pitlochry rail station. The rural hamlet, nestled in the central Scottish highlands, was my first stop since leaving the country’s bustling capital of Edinburgh earlier that afternoon.

I walked across the station’s empty parking lot and rested my backpack at the foot of a moss-covered stone wall while I waited for my course instructor, Peter Ananin, to arrive.

Within minutes, a bright green sedan crossed a bridge and wound its way along the single-track road in my direction. As the vehicle entered the parking lot and approached my pile of gear, Peter gave a spirited wave from behind the wheel and pulled up beside me. A bundle of dried heather tucked inside a small pouch made from a tanned animal bladder swung from the rear-view mirror like a pendulum as he released the clutch and put the brakes on the car.

Wearing a broad-rimmed leather hat, a knitted wool sweater and a green and black kilt, Peter stepped out of his car and immediately embraced me with a warm smile and a hug. His girlfriend Maggie, a Forest School teacher from England, opened the passenger door and soon followed suit.

“So good to meet you!” exclaimed Peter.

It was mid-August of last year, and six months prior to meeting I began making arrangements to attend a traditional hide tanning course co-hosted by him and his assistant, a Dutchman named Steven Dirven. With those plans finally coming to fruition, I had arrived in the United Kingdom the day before and we were a 40-minute drive from the rest of our group at the hide camp.

Our group would spend a week at The Scottish Crannog Centre, a historical reenactment site built to resemble ancient life in the Iron Age along the banks of Loch Tay on the outskirts of Kenmore. I joined 12 other people participating in the camp who came from The Netherlands, Norway, other parts of the United Kingdom, and Canada. We were all in pursuit of a common goal: to tan deer, fish and sheep skins using traditional methods.

Scotland’s pastoral farmers support about 7 million sheep across a country renowned not only for bucolic idylls, but also a damp climate (some of its wettest regions receive an average of 250 days of rain per year). Fortunately for sheep, their wool contains lanolin, a waxy substance that naturally allows the animals to shed moisture from their coats.

Suitably, the tanning method we used with tree bark causes the skin to contract and deter water, explains Steven.

“Although tannins on their own don’t necessarily make leather waterproof, it depends on the type of animal skin: how it is treated before tannins are applied, what kind of tannins, and in which way it is applied. And last but not least, how you treat the leather. Tanned hides allow the application of fat, oil and wax making a waterproof coating,” he said.

On the first day our group gathered and peeled the bark from nearby willow, alder and oak branches and boiled it in a large pot of water over an open fire. The barks contain tannins, the bitter, astringent-tasting plant extract which bind with proteins in skin to transform it into leather.

Between several applications of the tree bark infusion, we dried the sheepskins over a smoldering fire—the wafting smoke is a natural preservative and also aids in the softening process. Next, we worked the skins over rounded posts to open and stretch the fibers in a process called breaking. Finally, we coated the skin with fat and oils and worked it once more until supple and dry.

There’s something transformative that happens when a group of people set up camp together to share ancient skills, which at some point in our lineages each of our ancestors had practiced—in this case, turning animal skins into useable leather. Over the course of a week we formed a small community, relying on one another to prepare meals, to keep our shared space tidy, to listen when we experienced personal revelations, and to offer support after a challenging day of physical labor. During times of rest and relaxation we shared stories and songs by an open fire, and slept peaceful hours until waking time when Steven would sing the rest of the group out of slumber.

“Crafting in a group, if possible with materials from your close surroundings, makes us aware of being part of this bigger community, and able to develop a relationship with all its members. A deerskin you turned into a dress is much more than a dress alone. The memories of making it, your energy and those of your friends invested in the creation and the gratefulness to the deer give a kind of belonging [that is] hard to describe but amazing to feel. And a new way to look to other materials—even your normal jeans won’t quite be the same,” explains Steven.

“When creating community, we often forget the non-human partakers: other animals, the elements, climate and the items that make us capable to be where we are. In the present time we are less likely to be aware of the non-human part of our community, even though they are ever-present. There is a sense [today] that we are no longer part of the rest of nature, even though we are still depending just as much as in any time in history on the land, water, the sun and all others that together shape our world to feed us, dress us and keep us warm,” he said. 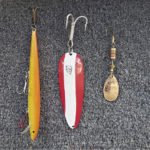 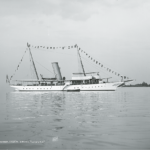 The luxury yacht that replaced the America