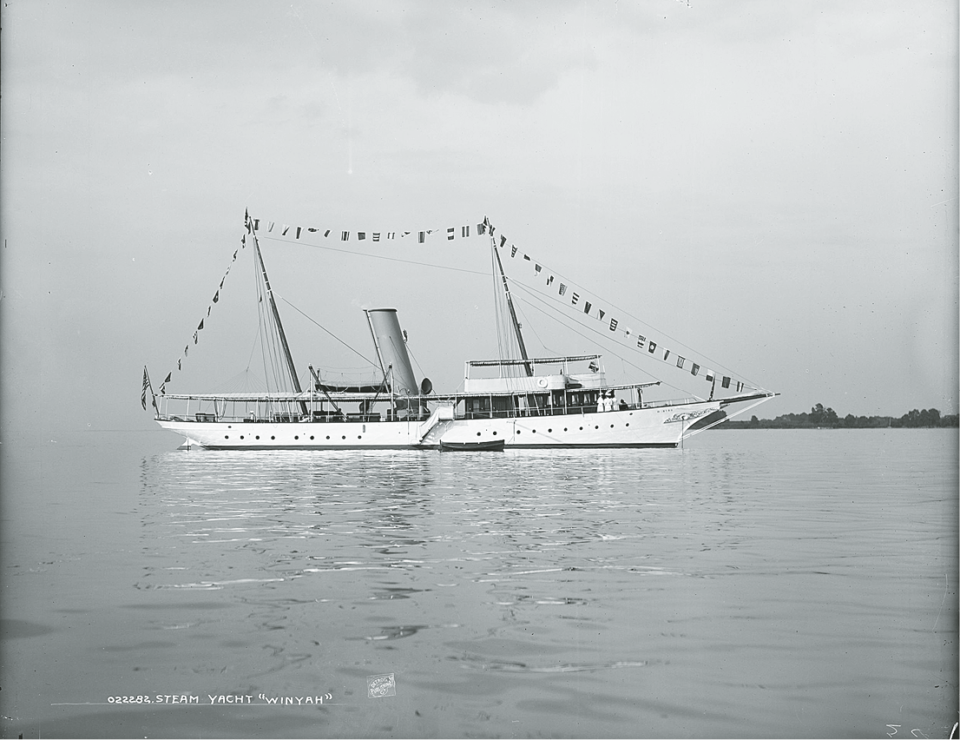 Originally named the Dungeness, the luxury yacht was renamed Winyah after it was sold to Michigan’s wealthy lumber baron Frank W. Fletcher. | LIBRARY OF CONGRESS

Ever wonder what happened to those famous luxurious steam yachts owned by the wealthy in what some call the “Gilded Age” before the First World War? Some were sold to the U.S. government for war service like the Itasca and Comanche; some sank like the Gunilda; and some were sold to foreign governments like the 214-foot steel yacht Alvina which was sold to the Russian government. And then there is the Dungeness, the luxury yacht that was built in 1894 at a cost of $490,000 (2020 equivalent $14.7 million)—one of the most lavish vessels of its time—that eventually became a fish boat on Lake Superior.

The 115-foot long Dungeness was built in Sparrows Point, Maryland and designed by George A. Mallory, for devoted yachtswoman Mrs. Lucy Coleman Carnegie, the widow of wealthy steel magnate Thomas Carnegie, the younger brother of the tycoon and philanthropist Andrew Carnegie. With her yacht in 1894, Lucy Carnegie was the first woman to join the exclusive New York Yacht Club. After her 43-year-old husband Thomas died in 1886, Lucy, who has been described as a “lady of immense wealth,” refused offers by her brother-in-law Andrew to buy her out. As a single parent, she raised their nine children (the youngest was 5 and eldest 19 when Thomas died), finished their famous mansion Dungeness on Cumberland Island, Georgia (she had a staff of 200) and built houses for all her children.

In 1898—just four years after being built—the Dungeness was sold to Michigan’s wealthy lumber baron Frank W. Fletcher, who renamed the yacht Winyah. He used the grand yacht to tour Georgian Bay’s islands with his family, friends and business associates. Here’s how the Sail & Sweep yachting magazine in October 1902 described the Winyah: “The cabin and all interior woodwork is finished in white enamel, striped and decorated artistically with gold. The upholstery is red plush throughout…Forward is a mahogany deckhouse beautifully fitted…as a dining room (with) a large double mahogany staircase leading to the main cabin below…”

Fletcher died in 1922, and three years later in 1925, the Winyah was sold to Duluth’s H. Christiansen & Sons, a supplier of nets and fishing supplies to commercial fishermen along the North Shore of Lake Superior. They renovated the yacht to a coastal freighter, including removing her spars and bowsprit, and enclosing her main deck with a plain wooden cabin. Her route was from Duluth-Superior to Port Arthur (now part of Thunder Bay) to carry passengers and fishing supplies. Then in 1928, after the Booth Fisheries Company’s 183-foot freighter America sank on June 7, 1928, in Washington Harbor off the shore of Isle Royale, the Winyah became the primary link to Isle Royale’s commercial fishing community.

According to an August 1, 1943 article “North Shore Fishermen” in the Minneapolis Star Tribune, the commercial fishing up the North Shore of Lake Superior and beyond Grand Marais, had “over 400 fishermen, operating more than 800 skiffs and 88 power boats” and they were “netting lake trout, herring, white fish and ciscoes.” The article went on to say that in the past two years, their catches totalled 20 million pounds, valued at an estimated $600,000 (2020 equivalent $9.1 million). October was the busiest shipping month for fresh fish and, during Christmas season, more than 500,000 pieces of lutefisk were sold.

According to the Star Tribune article, the Winyah carried 30 tons of ice on its twice-weekly round trip up the North Shore, picking up fish, carrying freight, delivering mail/supplies and transporting passengers. Loaded with iced fish stored in her special hold, the Winyah headed back to Duluth dock, aiming to arrive around 2 a.m. where stevedores were waiting to unload the ship. The crates of fish were then trucked to a fish wholesaler’s warehouse and unloaded, sorted and fish packed into boxes for delivery to railway refrigerated freight cars. “From Duluth, the fast freight cars go east to Pittsburgh, west to Denver, and south to Fort Worth, Texas. Refrigerator trucks rush them to nearby points within Minnesota and Wisconsin,” reported the Star Tribune.

After 16 years of being a fish boat, the days of the Winyah became numbered when in 1944 the Christiansen’s purchased a diesel-powered boat. After being idle for several years, she was sold in 1950; three years later, in 1953, the once luxurious yacht of one of one of American’s richest families, was broken up for scrap in Duluth. 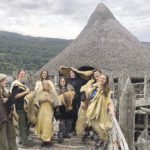 A week of ancestral skills in the Scottish highlands