In the outdoor world, we like to think the places we love are sacred; the Boundary Waters Canoe Area Wilderness comes to mind. The only problem is nothing is sacred in American politics these days. This year, the Republican majority in Congress set in motion an effort to give away America’s national forests (of which the BWCAW is a part), national wildlife refuges, historic sites and national monuments.

The give-away would work like this. Public land would be transferred to the state where it was located. The state could then manage the land for maximum economic benefit or, if it couldn’t afford to manage the land, sell it off. Even if the state retained ownership, it wouldn’t necessarily be available for public uses like hunting, hiking or camping. In at least three western states, public access isn’t allowed on state lands.

The congressional wheels for this give-away were set in motion last March when Senator Lisa Murkowski (R-AK) introduced an amendment to the Senate’s nonbinding budget resolution to fund state efforts to take over public lands. The measure passed 51 to 49 with the vote falling on party lines. The amendment was then included in the House resolution, again passing on a party-line vote.  Minnesota’s Republican congressmen voted for the budget resolution.

Does this mean these Minnesota politicians voted to give away the Boundary Waters? Not necessarily. But it should be noted that a Montana Republican, U.S. Rep. Ryan Zinke, voted against the resolution, specifically because it contained the land transfer language. Zinke was quoted in the Helena Independent Record saying, “This conference process resulted in the revised budget resolution that included a provision that, as a fifth generation Montanan, I simply could not vote for,” Zinke said. “It included vaguely-written language to allow the sale of public lands. I have said before, and I will say again: Montana is not for sale.”

While Murkowski’s amendment requires further legislation before the land transfer process can begin, conservationists, hunters, hikers and the outdoor industry are taking the threat of land transfers very seriously. The congressional effort is coupled with movements within western state legislatures to demand the transfer of public lands to the states.

At the state level, the epicenter of the land transfer movement is Utah, which passed the Public Lands Transfer Act and Related Study in 2012, as well as legislation calling for the transfer of public lands management to the state. National parks, some national monuments, Indian reservations and designated wilderness areas would remain under federal control, but the Grand Staircase-Escalante National Monument would not. Revenues derived from state management, notably through gas and oil development, would fund the state school trust.

Similar legislation popped up in several western state legislatures since then, most often facing strong opposition from the outdoor community. In Montana, a public lands rally to oppose such legislation was highlighted by a fiery speech from Governor Steve Bullock, who pointed out that Montana couldn’t afford to manage all of the state’s public land and would be forced to sell it off. “Our public lands are not part of the problem; they’re indeed part of the solution. This is jeopardizing what it means to be a Montanan,” he said. “As governor, I will do everything I can to ensure that wholesale transfers of public lands will not occur, not on my watch.”

Public land transfer legislation was defeated in several of the western states where it was introduced, but opponents are prepared for a long fight that must be won. Conservationists believe the future of hunting as we know it is at stake. About 70 percent of western hunters access public lands. Large numbers of hunters use national forests, national wildlife refuges, waterfowl production areas and other public lands in the rest of the country, too.

Randy Newburg, host of a television show called Fresh Tracks, which features hunting on public lands, told attendees at the recent Theodore Roosevelt Conservation Partnership’s Western Media Summit that the fight will occur in the halls of Congress. Newburg, who has been involved in hunting politics since the 1980s, takes a dim view of Washington D.C. politicians.

“Right now in Congress, I can’t find anybody, other than a very few exceptions, that will fight for public lands,” he said.

He believes the strategy to take away America’s public lands is two-fold. Over time, Congress has cut back funding for agencies such as the U.S. Forest Service, making it more difficult for the agencies to manage and maintain public lands. This in turn has led to cut backs in management activities on public lands, thus leading some folks to say the federal government doesn’t do a good job of managing its lands and the states could do better.

“It’s not about land management,” Newberg said. “There’s a lot of blaming the feds. But they shouldn’t be blaming the rangers in the national forests. The feds are Congress. They’re the ones with the checkbook.”

Since checkbooks are about the only thing today’s politicians understand or respect, some conservationists are using theirs to strike back. Last week, news from Utah is that the massive Outdoor Retailer convention which has been held in Salt Lake City for 18 years may be seeking a new location when its contract expires in 2016. The reason, according to one man, is Utah’s political push to take over public lands.

Peter Metcalf, owner and CEO of Black Diamond, which manufactures climbing gear, told KUTV, “There is a move to take over the public lands from the federal government, and no one, here at this convention, supports that.”

Outdoor Retailers is the largest convention held in Salt Lake City. According to other news reports, convention officials say their decision will be based on convention size and available hotel rooms. Metcalf, however, represents the mood of mood of many the outdoor industry.

It’s impossible to place a monetary value on the nation’s public lands. The serve many functions from utilitarian uses like logging and grazing to recreational uses like hunting fishing, camping and hiking. Public lands protect the headwaters of nearly all of the nation’s waterways. They support some of our most valued wildlife species like moose, elk and wolves. Without this wealth of public land, America would be a lesser place. We can’t let anyone give it away. 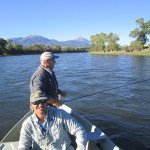 A Morning in Paradise 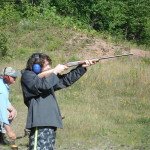 Chicago boy gets a chance to shoot