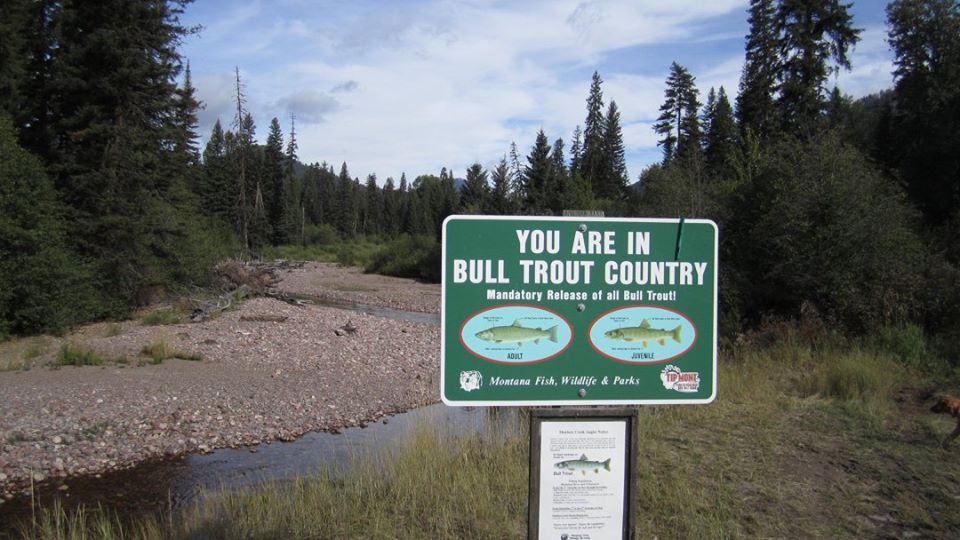 Montana’s Rock Creek is a state-designated blue ribbon trout stream about 20 miles east of Missoula. From Interstate 90, you can follow the Rock Creek Road about 50 miles up the valley. Excellent access from the road and lots of public land makes Rock Creek a good and popular place to fish.

I spent my last three days in Montana along Rock Creek. Although it’s a busy place, I saw virtually no one along the river as I fished. The fishing was less than spectacular, mostly due to unusually low water levels, but I’ve wanted to fish Rock Creek ever since I read about it in Outdoor Life as a kid. So I did.

There are no grizzly bears along the Rock Creek drainage, but the dogs and I had already spent plenty of time where they exist. We did twice happen upon cow moose in willow thickets. We saw whitetails and mulies. Tanner flushed a few grouse, too. Once, when we popped out on the river bank from a trail, we startled some creature across the river. I heard a noise like a cough or growl and looked up to see a flash of an animal disappearing into the woods. A first I thought I was a red fox, but it was much too large. I don’t think it was a deer.

While there are no grizzlies, Rock Creek contains bull trout, which to me is the next best thing. Bull trout are actually large char, similar to lake trout and brook trout, which live in rivers and lakes west of the Continental Divide. In Montana, they are on the Endangered Species list, largely due to habitat loss. They need cold, clean water to survive. If you catch a bull trout, you must release it immediately. That’s fine. As someone who has had a life-long love affair with lakers and brookies, I’d just like to catch one.

It didn’t happen on this trip or on a similar excursion to British Columbia a few years ago (where they are not considered endangered). I’m told at this time of year, bull trout are beginning to spawn, making them less likely to strike angler’s offerings. Also, it is against the law to intentionally fish for them.

Just fishing where bull trout live is good enough for me. I spent time at the end of the road high in the Rockies, only a few miles downstream from the Divide. This is the Pacific Northwest at its most pristine. A place where the trees grow tall and the rivers run strong and clear. Fresh snow blanketed the high country, perhaps a thousand feet above my elevation. Although beautiful, the snow and accompanying cold weather tripped the off switch for fishing. In three days of wonderful, wild solitude, I caught just one cutthroat trout. But I’ll go back. Armed with the knowledge gained on this first foray, I’ll venture even deeper into bull trout country.

Even though I found similar solitude along Rock Creek, the three days spent there were my re-entry to civilization.  I talked to a couple of anglers who were having no better fishing success than me. Perhaps I could have wandered elsewhere, but I was catching just enough trout—rainbows, browns, brooks and cutts—to hold my interest.

The dogs joined me on the stream. Tanner, a veteran of trout streams from the wilds of Ontario to the Olympic Peninsula, knows the game. He generally stands beside me, unfazed by cold water, watching my line as intently as me. When I catch a trout he must be verbally reminded not to retrieve it. Reluctantly, he obeys.

On the other hand, or paw as it were, the pup Rainy gets bored. He prefers to keep his paws dry, sitting on the bank, sniffing around in the bushes or snoozing in the sun. When he gets really bored or hungry, he starts to bark. Grudgingly, I’ll admit it’s an effective strategy.  I’m pretty sure a barking dog frightens the fish, so rainy usually convinces me to either move along the stream or head back to the truck and fill the dogs’ dinner bowls.

Because the water was low, sometimes you had to walk one hundred yards or more to find pockets that were deep enough to hold fish. Doing so is no big deal when you know a river, which I did not. Every walk was an exploration of new territory for me. Sometimes, I’d walk and not find anything worth fishing. Then it was back to the truck. I’d drive until I found an angler pull-out where no vehicle was parked, preferably in a place where the river curved away from the road. Then I’d start walking again.

While I saw no one along the streams, I encountered lots of anglers along Rock Creek Road, which is like the Main Street of Montana trout fishing. In fact, I started to think there were more anglers driving the road than actually fishing. Watching this parade of passing vehicles was entertaining. Most occupants of the vehicles were men. Some were older men with fishing hats, sunglasses and trimmed gray beards. Others were younger men with scruffy, hipster beards and plaid shirts. Sometimes the men were accompanied by women, both young and middle-aged. The women wore fishing hats and sunglasses, too.

Vehicles ranged from new SUVs and Subarus to beat-up, open Jeeps. The jeep drivers tended to be wild-looking guys with unruly beards who did not wear hats. Strangely, about half of the vehicles had rigged fly rods sticking three feet out a rear window or, in the open jeeps, where the rear window ought to be. Fly rods are nine feet long. They cost as much as a new shotgun. And they break as easily as any fishing rod. I take apart my fly rods and stow them in a protective case when I’m in a vehicle. To leave an expensive piece of tackle sticking out the window seems like sheer lunacy to me.

The road is barely wide enough for two vehicles to meet and get around one another, so everyone is polite enough to slow down and wave as you pass. I began trout fishing at age 4 and the feeling of exhilaration I felt upon catching my first brook trout has never waned. Watching this parade of trout anglers, I wondered: Are these my people? Then I thought, no, they’re not. But I’m not sure why I think that way.

I didn’t travel to Montana to join anyone’s parade. All I really wanted was to spend some time in places that bull trout and grizzly bears call home. Ultimately, my trout fishing is less about catching trout than it is about being there. Wildness, solitude and the company of good friends and dogs  are what I seek.  Along a trout stream is one place where I find all of that and more. 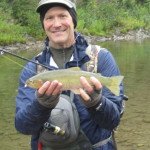 A Day in the Wilderness 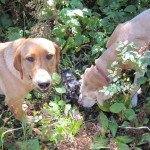 Thriving in the Grouse Woods