During this season of short days, my opportunities for dog walks in the woods are limited to weekends. On such walks, the dogs are off leash, so I like to be able to see them. A couple of years ago, I bought lights for their collars, thinking this would make evening walks possible. It did, for a couple of days.

Walking down the county road near my home one evening, a neighbor passing in a pick-up stopped to see if everything was all right, which seemed an odd question until he explained why he asked.

“I just saw a wolf cross the road a quarter mile ahead of you,” he said.

We turned around and went home. That was the end of nighttime off-leash walks. In the daytime, I can see tracks in the snow and be aware of my surroundings. When you are a dog owner in wolf country, that’s important.

Last Saturday, I took the dogs for a morning walk on our regular route; a no-longer-passable old road that goes deep into the woods. It was the first time we’d been back there since the previous Sunday. Almost immediately, the dogs showed great interest in urine-stained snow. They were sniffing and digging into the snow as I walked up to them. The subject of their interest was wolf sign, lots of it. The wolves’ comings and goings left a trail in the snow that appeared to be two or three days old. In my experience, you rarely encounter a wolf trail unless they have a nearby kill.

Now my guard was up. Walking up the road, I noticed a couple of more wolf trails, as well as places the animals had used as toilets. In one place, the air carried a foul and pungent urine smell. Then I noticed the fresh tracks of a lone wolf walking up the road. About a quarter mile into the woods, I decided to turn around.

It isn’t uncommon to encounter wolf sign on our daily walks throughout the year. After all, the wolves live here. As has been previously noted in this column, it is clear to me that the local wolves and my dogs are acquainted through the canine communication network of scent. Occasionally, a well-placed pile of wolf scat leaves no doubt about that two-way communication. I’m pretty sure that sometimes the message is intended for me.

Around noon, I headed to town to run errands. On my way home, I decided to go “the long way” along the county road that leads to my house. Driving around a corner, I happened upon a wolf standing in the middle of the road that dashed into the woods. As I went past, I noticed other tracks crossing the road where it had been. I suspect it wasn’t alone.  A couple of miles down the road, I saw a big red stain and the stomach contents of a whitetail on the hard-packed snow that makes up the surface of the road. Perhaps 20 yards into the woods was the carcass.

Curiousity made me turn around and go back for a second look. A raven flew up from the carcass as I slowed to a stop. Usually, I’ll thoroughly investigate such a scene. Last Saturday, I decided not to track that bloody snow into the truck. So I looked from the window. The ravens had obliterated all of the tracks in the snow, so it was difficult to surmise what happened. Maybe someone had struck the deer with a vehicle and they or someone else had pulled it off the road and into the woods. Perhaps the wolves had killed the deer in the road. Either way, it seemed likely the wolves had visited the kill. With my view from the road, I could see at least the rib cage and the hide remained.

In my experience, wolves quickly reduce a kill to nothing, with the able assistance of the ever-present ravens. I once happened upon a kill several hours after a snowfall. All that remained were wolf tracks in the fresh snow and lots of blood. The pack had completely devoured the deer. Since I had dogs with me, I didn’t linger to more thoroughly sleuth out the scene.

On Sunday morning, the dogs and I took another walk down the old road. The dogs were still keenly interested in the wolf sign, but there was no fresh sign from the past 24 hours. We went another half-mile farther than we did on Saturday, finding more wolf sign, none fresh. What surprised me is there were no deer tracks. Generally, I’ll see several sets of fresh deer tracks on this walk. If the wolves are just passing through, the deer avoid them, but don’t vacate the area. When the wolves are hanging around, the deer go somewhere else. Later in the day, I checked out the carcass along the road. The rib cage and hide were gone. Perhaps the wolves had come back and cleaned up the leftovers.

Maybe the wolves will rest up and continue on their endless roaming across their home range. Judging from where I saw the most tracks on my walk, they may have had a second kill as well. Those wolf trails were perhaps a mile away from the roadside kill and likely were not associated with it. Although it was doubtless the same wolves in both locations.

A couple of weeks ago, my young Lab, Rainy, discovered two lower legs from a freshly killed fawn while we were walking, so the local whitetails are providing winter sustenance for the wolves. The same thing happens every year. The deer remain numerous enough to feed the wolves and feed me. Last night, I put Rainy out on his backyard leash before bedtime. Suddenly, he began barking and then trailed off into a howl. Hmmm. I hadn’t heard him do that before. When I stepped outside, Rainy was facing in the direction of the distant roadside kill and listening intently. I listened, too. Faint and far off, I heard a howl. The wolves were still in the neighborhood. 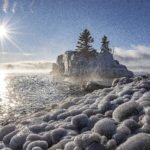 Bison, pigeons & wolverines: A glimpse into the past