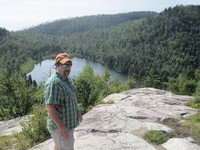 Wolf Ridge executive director Pete Smerud stands atop Marshall Mountain, where some students get a chance to sleep beneath the stars.

Veteran rescue team and ski patrol member Pete Smerud of Finland has a story about an unusual call for assistance he received at the Wolf Ridge Environmental Learning Center, of which he is the executive director. He was told a young student was complaining of a lower leg injury after returning from a hike. But talking to the boy, he learned it wasn’t really an injury.

“When I examined him, it turned out he was sore. He had never been sore before,” Smerud said.

The boy was a victim of exercise. The 2 ½-mile hike was the most physical activity he had ever experienced. Smerud tells the story to illustrate the challenge of delivering environmental education to kids who have spent little or no time in the outdoors. The challenge applies not only to 12-year-olds, but also to college students pursuing master’s degrees in environmental education or families participating in naturalist programs held at North Shore resorts.

Smerud told me about these challenges as we hiked around the dramatically scenic Wolf Ridge property. The center began 40 years ago in Isabella and moved to its present location on a high ridge above Lake Superior in 1988. Through acquisitions and land exchanges, Wolf Ridge now has 2,000 forested acres containing a trout stream, two lakes and a couple of ridges high enough to be called mountains. We climbed to the top of one of them, Mount Marshall, named for the late Duluth philanthropists Caroline and Julia Marshall, who helped acquire much of the property. Standing on a rocky knob, we could look one direction for a sweeping view of Lake Superior and then another direction toward Wolf Lake and forested hills beyond.

“When the bugs aren’t too bad, we’ll take kids up here to spend night camping without a tent,” Smerud explained. “They wake up the next morning to the sun rising over Lake Superior.”

While such an experience would be a great way for just about anyone to start the day, for many kids visiting Wolf Ridge, it may their first chance to connect with nature. Some kids may have never before been outdoors at night and some, coming from urban environments, may see stars for the first time. Many kids haven’t experienced what today is called “unstructured time.” In the not-so-distant past, we called it “playing outside”

Smerud said Wolf Ridge has offered an art class called “Earthworks,” where students go outside and use natural materials to create art intended not be permanent, but to rot or wash away, like a drawing in beach sand. Basically, it’s an opportunity for kids to discover nature through play. Some might build a fort; others might make a decoration with rocks and moss. All get some hands-on time with nature. Along the same lines, a popular resort naturalist program is a two-hour agates class where kids and their parents wander on a Lake Superior beach and pick up rocks.

Wolf Ridge also teaches kids outdoor skills such as paddling and rock climbing. In winter, they have a chance to learn what goes on beneath the ice of a frozen lake, including spending time inside a dark house on Wolf Lake watching perch through a large hole in the ice. If they choose, they can even try ice-fishing for perch at the end of the class. Nordic skiing is popular, too. Every winter, 6,000 kids are introduced to cross-country skiing at Wolf Ridge.

Indoors, the center offers classes that have changed with the times. Environmental education began with the ecology movement of the 1960s as a way for kids to learn about nature and science. By the 1980s, classes included a cultural history of how people have lived on and used the land. Teachers, who attend Wolf Ridge with their students, often incorporate what the kids learn at Wolf Ridge into the lesson plan for the entire school year in topics such as Minnesota history.

In 1988, the center held its first intergenerational environmental education programs, inviting grandparents to take classes with their grandchildren. Although some educators questioned whether the classes would work, Smerud said they’ve been tremendously successful.

“The grandparent-child bond gives kids an entry into nature,” he said. “Grandparents see the need for kids to make that connection.”

The concept of sustainability was added in the 1990s with a class called Conservation Lifestyles, where students learned how aspects of their daily lives regarding topics such as energy use or recycling affect the environment. By the 2000s, climate change, renewable energy and even the relationship between food and farming were included in lesson plans. In case, you were wondering, children also learn about the roles hunting and trapping play in wildlife management.

A forest ecology class applies the concept of sustainability to a real-world situation. The 12-year-old students go into the woods and learn about forest management activities, including timber harvest and reforestation. Back in the classroom, they are given a map of the forest, with instructions to design a timber harvest. Some of the students play the roles of foresters; others are wildlife managers, water resources specialists or ecologists. All are told they need to protect water quality and habitat while meeting the forester’s harvest goals. Before the exercise is complete, 12-year-old foresters and ecologists may be shouting at one another as they attempt resolve issues. After the class, students are asked how they think adults deal with the same issues when setting up timber sales. They are surprised to learn adults may start shouting, too.

If there is any evidence that environmental education makes a difference, it’s that 12-year-olds often return during their college years for part of their coursework for University of Minnesota Duluth’s master’s program in environmental education. Smerud can name many former students and interns who have gone on to careers in natural resources or similar fields. Wolf Ridge provides education to about 15,000 annually, including 12,000 school kids. This has a noticeable ripple effect on the North Shore, which parents often discover for the first time when their kids attend the center.

“We introduce thousands of families to the North Shore every year,” Smerud said.

While a few days of environmental education can’t replace what previous generations learned simply from playing outside, it’s about the best option we have for giving kids an introduction to the outdoors. Although one of the largest, Wolf Ridge is by no means the only environmental learning center in Minnesota. In an era when we wonder what the future holds for conservation and the outdoors, it’s good to know kids still have chance, at least once, to see the nighttime stars and play outside.

Points North: What If We had A Wildlife Park In Minnesota?