If you’ve traveled through South Dakota along Interstate 90, you are no doubt familiar with Wall Drug’s dozens of Old-West-folksy highway signs. If you ever stopped there, you know it more than lives up to its advertising as a traveler’s haven, offering everything from free ice water and five-cent coffee (since 1931) to tourist trinkets, western memorabilia and, yes, a pharmacy. It’s fun to stroll through Wall Drug at any time of day, but I like it best in the early morning.

We spent a night in Wall last week and stopped in Wall Drug for breakfast. Unless you live there, the only reason to be in Wall is because you are on your way to somewhere else. At the breakfast table you’ll see everyone from retired local ranchers wearing cowboy hats to travelers en route on an interstate highway that stretches from Boston to Seattle. You never know who you may meet while filling your plate at the breakfast buffet.

On this trip, we met no one other than fellow tourists. We were on our way to the nearby Black Hills. While I’ve hunted for turkeys and fly-fished trout there in the past, this was a sight-seeing excursion. Accompanying Vikki and me were our friends Amber Pratt and her daughter, Leah, both of Grand Marais. Neither of the women had ever been on a road trip west of the Missouri River.

We’d introduced them to the West the previous day with a late-afternoon drive through Badlands National Monument. They marveled at the weirdly eroded formations, taking lots of pictures for the folks back home. Then we pulled up beside a prairie dog town, where they were introduced to western wildlife. The roly-poly rodents enchanted Leah. A little further along the road we happened upon some grazing bighorn sheep and around the next bend a flock of wild turkeys. All were new to the girl from Grand Marais.

Over the coming days, we had the good fortune to encounter mule deer, bison, pronghorns, wild burros and more. Historically, the Black Hills contained most western wildlife species. General George Armstrong Custer killed a grizzly bear there on the 1874 Black Hills Expedition. As with most of the West, much of the native wildlife in the Hills was wiped out or severely depleted during the settlement era. Today’s abundance of wildlife is largely a result of 20th Century wildlife management, including the introduction of nonnative species such as Rocky Mountain goats and wild turkeys. Native bison were reintroduced to the hills and exist behind high fences at Wind Cave National Monument and Custer State Park. Bears and wolves are nonexistent, but the region supports a thriving population of mountain lions.

Like Yellowstone National Park, which is another day’s journey west, the Black Hills offers extraordinary opportunities to view wildlife in pristine settings, often without leaving your vehicle. While you are may see anything from elk to mountain goats on scenic routes throughout the hills, the best wildlife driving tours are at Wind Cave and Custer State Park, because both have massive fenced enclosures. It was interesting explaining to our friends that while the bison appeared to be free-ranging, they were contained with a fence. The Wild West disappeared long ago.

The fact it is surrounded by a fence makes Custer State Park no less impressive. An earlier generation of South Dakotans, led by the visionary politician Peter Norbeck, had the foresight to set aside the most beautiful place in their state for public enjoyment, including not only the adjoining parks of Custer and Wind Cave, but also through the creation of scenic drives—not long after automobiles became commonplace—and the development of Mount Rushmore. All of this transformed the Black Hills into one of America’s greatest vacation destinations. South Dakota, an agricultural state, has been reaping the economic rewards of tourism since the Great Depression of the 1930s.

Mount Rushmore is clearly the Black Hills’ primary attraction, but viewing bison and other western wildlife is no small part of the average tourist’s experience. But I wonder how many of those tourists, who may never have an opportunity to encounter wildlife in their everyday lives, realize an abundance of wildlife exists beyond the confines national and state parks? And of those who do, how many understand that wildlife is something all Americans hold in common or appreciate our extraordinary natural heritage?

Minnesota has exceptional public places, such as Itasca State Park and the Boundary Waters Canoe Area Wilderness, but we have nothing like Custer State Park, where the general public has a chance to see our native wildlife, including such charismatic critters as bison, elk, moose and wolves. Today it may be politically impossible to create a huge, fenced-in area where such critters could roam and be encountered via a vehicle tour. This isn’t necessarily due to a lack of opportunity. In recent years we’ve seen the establishment of the massive Glacial Ridge National Wildlife Refuge in northwestern Minnesota and the new Lake Vermilion State Park in the northwest, both comprising many thousands of acres of undeveloped lands and waters.

Arguably, the prairie landscape of Glacial Ridge, where bison, elk and moose historically roamed, could have been developed as a wildlife park. But I doubt the conservation community had much interest in doing so. Instead we prefer to take somewhat more hands-off approach, limiting the development of roads for human access, while manipulating the habitat to produce a maximum amount of huntable game such as waterfowl. Creating a place where the Average Joe could see the native wildlife that once roamed the state would run counter to the interests of present day hunters, wildlife managers and environmentalists.

It is fair to say the Minnesota prairie lacks the stunning, mountain scenery of Custer State Park, which would make it difficult to turn a place like Glacial Ridge into comparable destination. Still it is hard to imagine a park where the public encountered wildlife from the comfort and safety of their vehicles not becoming one of Minnesota’s top attractions. Like the Boundary Waters, over time such a park would develop its own constituency and improve our collective appreciation of the benefits of wildlife and wild lands.

Perhaps someday we’ll have another opportunity to protect a large expanse of prairie habitat. If we ever do, let’s hope the idea of creating a wildlife park for Minnesota is at least given fair consideration. 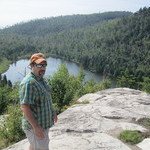 The School Where Kids Play Outside

Points North- The Hypocrisy of Carp and Cats