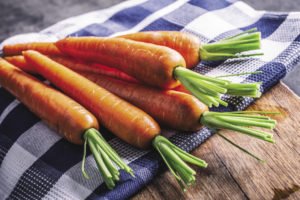 The history of the simple orange carrot is extensive and colorful. Fossil pollen has revealed its existence as far back as the Eocene period, around 55 million years ago. All carrots we see today are descendants of the wild carrot, which studies have shown probably originated on the Iranian plateau (present day Afghanistan, Pakistan and Iran). Northeast of the city of Tehran in Iran, exists the Dasht-e Haveej, or the Carrot Field, where it is believed carrots first made the shift from wild to cultivated status.

The wild carrot still exists and is a member of the Umbelliferae family, which also includes parsley, dill, cumin and parsnips. Exemplified by their common umbrella-like flower, the wild carrot looks very similar to its relative, the parsnip. White, thin, divided or “forked,” the wild carrot is bitter. It is believed that this common “weed” was not eaten as we do today, but rather the seeds were gathered and used medicinally as a diuretic, or as a spice.

In the beginning, it became apparent that under favorable conditions, the root of this plant grew larger and was edible. Under cultivation, the colors of this root vegetable began to transform as well. Back in Iran, humans began to manipulate the carrot. As a consequence, purple and yellow varieties began to emerge, as did a larger, more cylindrical root.

As it moved throughout the world, the carrot split into eastern and western varieties. Around the 10th century, the eastern purple and yellow carrots began to emerge in Asia. The progeny of these carrots then moved through the Mediterranean and made their way to Europe around the 16th century, where they parted ways and the western orange variety was born. It is in the Netherlands that the orange carrot is believed to have sprung. However, it was the French that created the long, sweet carrot we know and love today, as they altered the Dutch orange carrot into the varieties we buy in our grocery stores: the Chantenays, Nantes and Danvers.

Carrots are simple to grow in Minnesota. Quality soil, pH balance and proper spacing are important, yet it is primarily the depth of soil we have to contend with here in northern Minnesota, as we have a propensity for clay soil. Raised beds can provide the depth necessary for proper growth. Sow your seeds directly in the garden three weeks before the last frost, and remember to thin. According to Rodale’s Encyclopedia of Organic Gardening, “Thin 1 inch apart when the tops are 2 inches high, and be thorough, because crowded carrots will produce crooked roots. Thin again 2 weeks later to 3-4 inches apart.” There are many varieties to choose from. Purple and yellow varieties are readily available now and fantastic for some variety in your diet. Short season varieties are ideal for our northern temperatures. Keep in mind that some carrots are ideal for storage, while others are best eaten soon after harvest.

Carrots are very rich in nutrients. One cup of carrots gives you more than the daily value of vitamin A and is a great source of biotin, vitamin K, fiber, potassium, and vitamin C. Carrots really shine when it comes to their antioxidant properties. Loaded with phytonutrient antioxidants such as the carotenoids (beta-carotene and lutein) in your orange carrots, and anthocyanindins found primarily in purple carrots, these antioxidants are known for their potential to prevent cancer, as well as their ability to possibly improve vision and problems associated with cardiovascular disease.

In another bowl, beat eggs, oil and vanilla until well blended. Pour this mixture into the dry ingredients and mix until just combined. Spoon into muffin tins and bake for roughly 25 minutes. Yields 24 muffins.

Pancakes: Grate carrots and beets into a large bowl. Add garlic and salt and toss lightly. Mix in eggs.

Spray a skillet with cooking oil, or coat with olive oil, and heat to medium-high. Drop ¼ cup of mixture into skillet and flatten slightly. Repeat with other pancakes and cook 4 minutes on each side. Re-coat pan and repeat with remaining batter. Drizzle with yogurt-dill sauce.

In a skillet over medium heat, add carrots and sauté for 5 minutes. Stir in orange juice and 1 teaspoon of zest. Cover and simmer for 8 minutes, or until carrots are slightly softened. Remove from heat, but keep covered.

Heat a skillet to medium and working in batches, add meatballs and cook 8 minutes. Make sure you brown evenly. Serve meatballs over glazed carrots.

Workplace Wellness: Better Health for the Employee and Business