Apparently, there is significant opposition to the Minnesota DNR’s proposal to require nontoxic shot for small game hunting on wildlife management areas in the farming region of the state. To which this scribe can only say, “Really?”

The bulk of my pheasant hunting occurs on public lands or private lands open to public hunting in Minnesota and the Dakotas. Because of long-existing nontoxic shot requirements on federal lands, I made the switch to steel many years ago. For a while, I changed back and forth between lead and steel when hunting lands where nontoxic shot wasn’t required, but emptying all of the “wrong” shot shells from my game jacket and then refilling it with the “right” ones was a pain in the neck. So now I always use steel.

The real issue here is a no-brainer. Waterfowl hunters must use nontoxic shot everywhere in the state (including WMAs), because extensive research has found ducks ingest spent lead shot while feeding in marshes, then get sick and die from lead poisoning. That doesn’t happen when hunters use nontoxic shot. On Minnesota WMAs, pheasant hunters tromp through the same marshes spewing lead shot when they shoot at pheasants. The spent lead shot winds up in the marsh bottom where it is ingested by ducks that get sick and die.

I find it difficult to believe any pheasant hunter wants to poison ducks as collateral damage from firing lead shot across a western Minnesota slough. I’m surprised that a staid conservation organization like Pheasants Forever is taking issue with the lead shot ban (as reported in Outdoor News by Rob Drieslein last week). Here is the PF position statement that was given to Drieslein:

“As a non-profit conservation organization, our mission and focus is on habitat issues. In general, we support the Minnesota DNR’s scientific approach to resource management. In regards to the proposed ban on lead shot, there is a lack of any scientific evidence demonstrating that lead is having a negative impact on upland bird populations. Consequently, in the absence of scientific evidence, hunters should retain their freedom of choice in ammunition.”

Excellent, affordable nontoxic loads are available. In recent years I’ve used Federal’s Black Cloud and Winchester’s Blind Side in 3-inch 12-gauge loads with 2 shot. Both are $25 or less for a box of 25 rounds. I usually save a couple of bucks per box by buying them on sale or by the case. Both loads are lethal on pheasants.

If we can’t keep lead shot out of our duck sloughs, I suppose it is a lost cause to think we can reduce lead use in the deer woods. There, too, scientific evidence exists to show that scavenger birds such as bald eagles are being poisoned by lead bullets they ingest while feeding on deer entrails left in the woods by hunters. Ironically, the nontoxic copper bullets now available in common calibers perform as well or better than their lead counterparts and are similar in price to premium lead bullets. I can’t help but think that we don’t need to pass a law mandating the use of nontoxic bullets, because knowledgeable hunters will voluntarily begin using them. Once they do, the rest of the hunting community will follow their lead.

Unfortunately on the lead issue, hunters and anglers are neither leading nor following leaders. Instead they are being led by the sporting goods industry and the politicians seduced by the charms of industry lobbyists. Protecting the “right” of sportsmen to hunt and fish with lead-based products in perpetuity seems to be a perennial issue with Congress, which so far hasn’t done any better passing that legislation than they have done with passing anything else.

To be fair, part of this “save the lead” effort is a knee-jerk response to an equally knee-jerk action from the environmental community to ban all uses of lead in hunting and fishing, from tiny shot and sinkers to 12-pound downrigger weights. The industry has legitimate reason to worry about the costs associated with retooling and marketing for nonlead alternatives. And no loon is going to swallow a 12-pound downrigger weight. But loons do swallow lead jigs and sinkers, thus winding up with lead poisoning. We ought to be able to devise common-sense solutions to move away from small-sized lead-based tackle.

In fact, common sense and proactive, voluntary action are likely the best thing hunters and anglers have going for them, provided they step up to the plate and choose to make a difference. I spoke with Betty Wilkens, who embodies the idea of a proactive hunter and angler volunteer. That’s why she was named the Minnesota Outdoor News Person of the Year in 2012 and was chosen to represent Minnesotans on the Lessard-Sams Outdoor Heritage Council. She is a chemist and is well aware of the dangers posed by lead as a neurotoxin. She uses copper bullets in the deer woods and nontoxic fishing tackle.

About the DNR’s WMA proposal, she says, “It’s a very sensible rule and very conservative. The DNR is just proposing to ban lead shot on WMAs where it is being deposited in wetlands.”

Wilkens is also looking at the big picture, something the hunting and fishing community occasionally forgets to do. She points out the discussion is about depositing lead on public lands owned by all Minnesotans, not just roughly 10 percent of us who go hunting. Within that larger court of public opinion, a selfish argument about protecting hunters’ “freedom of choice in ammunition” almost certainly will fall flat.

“Besides,” she says, “sportsmen are better than that. We are conservationists and we simply shouldn’t be throwing this stuff (lead shot) around. We need to be more considerate of others.”

In essence, Wilkens is invoking the Golden Rule: Do unto others as you want them to do unto you. That’s always good advice and especially so when you are greatly outnumbered by the others. If hunters and anglers don’t care for and respect our public lands and fish and wildlife resources, then who will? 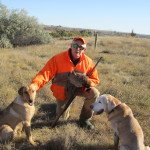 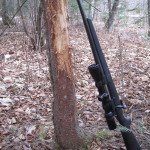 Didn’t get a deer? It must be someone’s fault