Snowy owls are tundra birds that are seen in the Northern Wilds during the winter. Look for them near open areas, such as the harbor waterfronts of Duluth and Thunder Bay. Photo by Michael Furtman

Our first chances to see snowy owls come with the first cold blasts of Canadian air in early winter. Then, in open areas, like airports, industrial complexes, and farm fields, or along the North Shore of Lake Superior, snowy owls begin turning up. They are true tundra birds, nesting as far north as only a handful of other species. Most of them stay north of us, even during the coldest winters.

Fortunately for us, some of them do venture south each winter. Most winters just a few will be seen, but as with the other northern owls, when the population cycle peaks, more birds come south; so in some years, many turn up. Sometimes dozens are seen on the northern Great Plains, or in areas of southern Canada. The most consistent area in our region is the Duluth-Superior harbor; every year, at least a couple of snowy owls spend time among the grain elevators and ice-bound boats.

To look for snowy owls in the Twin Ports, try dawn or dusk, when the owls are more active. They often perch on light posts or other tall structures. Once the sun is up, the best tactic is to scan the ice in the harbor. This can be tricky, since the white plumage with black speckles looks a lot like the clumps of broken ice that are everywhere in the shipping channels. Frequently, one will have to stare for some time at an “owl clump” to see if it moves.

The amount of dark feathering varies in a range from young females, which can look almost checkered, through young males and adult females, to adult males, which can be almost completely white. They have small black bills and yellow eyes. Feathers run all the way down the legs onto the feet, but this is often difficult to see. Snowy owls are large birds, and their wings will be rounded, unlike gulls, the other large, white birds of winter.

Unfortunately, since 2001 many of the traditional winter spots to check around Duluth and Superior are off-limits, and many birders have been confronted or evicted by security workers; so, choose your spots to stop and look with care. Nevertheless, the search for a snowy owl is worth the effort; few sights in nature are more impressive than a snow-white owl lifting off its perch and gliding through the dawn. 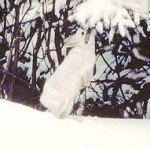 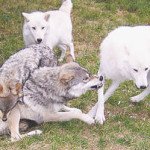