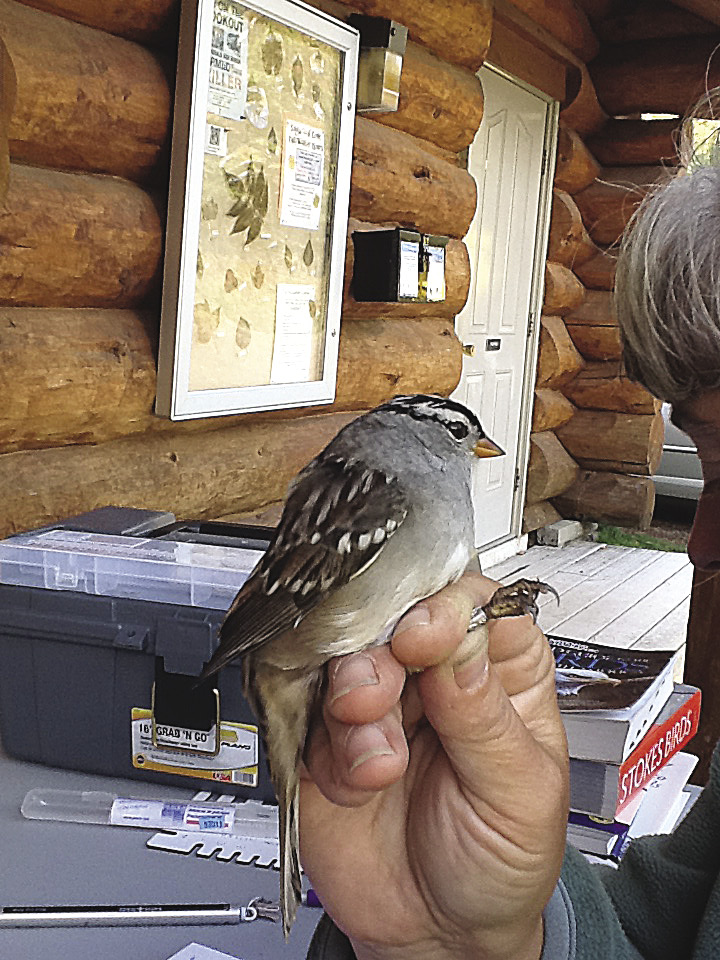 This white-crowned sparrow is one of many birds being banded. | SUBMITTED

On a September day, a sharp-shinned hawk will begin its migration south from its summer home in Canada. As the hawk nears Lake Superior, it will likely veer southwest along the lakeshore. The ideal wind will be from the northwest and the bird will conserve energy, riding the warmer thermal currents high above the cooler air that settles on the Big Lake. This hawk and thousands more of these raptors will circle upward toward Skyline Drive as they near Duluth, soaring over Hawk Ridge Nature Reserve.

Bird counters at Hawk Ridge tally an average of 75,000 of these eagles, hawks, vultures, falcons, osprey and harriers, flying over the ridge between mid-August and Oct. 31. Approximately, 18,000 visitors travel to the ridge each fall to see the birds flying overhead.

Hawk Ridge has not always been a place to celebrate the fall migration.

Before 1950, some locals used the birds for target practice, according to Janelle Long, Executive Director of the Hawk Ridge Bird Observatory. A local ornithology professor, Dr. Pershing Hofslund, would place cardboard signs at the site that stated not to shoot the birds. A Nature Magazine article from 1948 showed students gathering up the injured birds to help rehabilitate them. The killing stopped through efforts of the Duluth Bird Club (now the Duluth Audubon Society). The club publicized the illegal shooting and had the prohibition against shooting within the city limits enforced.

In 1951, the first hawk watch was organized. As the magnitude of the migration became apparent, observation increased from a few days in mid-September to daily counts from August through November. In 1972, the Duluth Audubon Society raised funds to protect the land at Hawk Ridge. Funds were donated to the City of Duluth to establish Hawk Ridge Nature Reserve. Under a trust agreement with the City, the Hawk Ridge Bird Observatory now manages Hawk Ridge Nature Reserve, open to the public to enjoy hiking and biking trails, natural high spots for observing the birds, and in the fall, even a couple of port-a-potties for the visiting bird enthusiasts.

While Hawk Ridge is open to the public year-round, in September and October, staff and volunteers are on hand every day from 9 a.m.-4 p.m., weather permitting, to assist visitors in spotting birds and interpret what they are seeing.

“A bald eagle up close is way different than up high in the sky,” Long said, and volunteers can help visitors identify the black speck flying overhead on days when the birds are high.

Some days the birds fly low and are easier to identify, and volunteers can help with that as well.

“We want to show the excitement of the bird migration to every one of all ages and abilities,” Long said.

Long explained that often the best time to see large numbers of migrating birds is when there is a wind out of the west or northwest—because birds can more efficiently ride these wind currents south.

“But another great time is after a storm,” Long said. “The birds hunker down during the rain.” Then they continue migrating en-mass once the storm has cleared.

There is no cost to visit Hawk Ridge, but donations are much appreciated for bird research and education. Learn more at www.hawkridge.org.

Tucked along the shore of Lake Superior four miles southwest of Schroeder sits Sugarloaf Cove, and according to naturalist Margie Menzies, the shoreline is a great place to see migrating shore birds such as grebes, plovers and sandpipers.

Sugarloaf Cove has an interesting past of its own.

From the 1940s through the 1970s, the cove was a staging place for timber to be towed across the lake to Ashland, Wisc., Menzies said. The pulpwood was stacked up all winter and moved in large rafts of logs across the lake during the summer. A full load was 40 acres of wood. When the company left the site, they restored the area as much as they could and planted pine plantations before donating the land to the Nature Conservancy.

In the 1990s, the Sugarloaf Cove land was sold to the DNR, which soon declared it a Scientific and Natural Area (SNA) because it contains features such as “exceptional geology,” which includes 1.1 billion year old lava flows and cobblestone beach, Menzies said. There are also more than 100 species of lichen.

Then in 1992, the Sugarloaf Interpretive Center Association (SICA) was formed to preserve and protect the land surrounding Sugarloaf Cove SNA and in 1998, a land exchange between the DNR and SICA (now Sugarloaf: The North Shore Stewardship Association) transferred ownership of the lands. Today, Sugarloaf NSSA manages the reserve and interpretive center.

There are many things to do at Sugarloaf Cove such as guided and self-guided walks, viewing the historic logging operation artifacts and walking through the interpretive center.

And every Saturday, Menzies and trained volunteers are banding birds. According to Menzies, the banding starts at sunrise and lasts until noon. From the end of August to early September is the intense warbler migration.

Sparrows, thrushes and kinglets all take off in later September because they don’t have as far to fly.

Sugarloaf naturalists are mostly banding small birds, Menzies said. “Because that’s what we’re set up for.”

She explained that it’s a good fall activity, because visitors can drop in on their own timeline, observe the banding (and maybe release a bird), and leave when they are ready.

Another September activity at Sugarloaf includes a photography workshop with photographer Chris Sandberg on Sept. 5.

To learn more about Sugarloaf Cove or see a schedule of events, go to www.sugarloafnorthshore.org.

Another site to view the fall migration with a turbid past is Mission Island Marsh Conservation Area, located on the south end of Thunder Bay.

In 1678, a trading post was erected on the island and later the land was farmed. By the 1960s, a portion of the island was a landfill site for the city of Fort William. Today, the Lakehead Region Conservation Authority manages the conservation area, which consists of wetlands that provide a stopover for migrating waterfowl, shorebirds, songbirds and raptors.

The area features a boardwalk, viewing mound and interpretive pavilion. There are picnic tables too, and from the lakeshore, there is a clear view of the Sleeping Giant on the opposite shore of the lake. To learn more, go to www.lakeheadca.com. 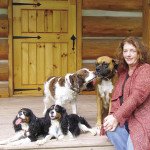 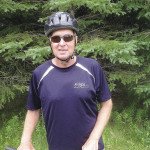 Bicyclist Encounters Wolf on the Highway