North of Duluth is a swamp; a really big swamp. In the early 20th Century, some folks got the idea they could drain the swamp and create a farming paradise. They dug long and straight ditches through the peat and, incredibly, cleared thousands of forested acres to create fields. So much open ground existed that prairie grouse, sharptails and even prairie chickens, flourished for a few decades.

But the swamp wasn’t drained away. The wished-for farming paradise never came to be. The forest gradually returned, overtaking much of the open ground. Sharptail numbers dwindled. Prairie chickens disappeared. And the swamp remained a swamp.

Today the swamp is a patchwork of small farms, black spruce swamps, aspen/deciduous woods, wet meadows and willow brush flats. As far as scenery goes, Minnesota has prettier places. But the diverse vegetation is exceptional wildlife habitat. The swamp lies along the southern edge of the boreal forest, which means it provides a home for northern critters ranging from boreal chickadees to moose. The mix of dense forest and open country supports a wide diversity of species, especially birds. Best known is a bird known to nest in the swamp, but more famous migrating there to spend the winter. That bird is the impressive great gray owl.

This is the bird which has made the swamp nationally famous among birders. It was even featured in the 2011 movie, “The Big Year,” starring Jack Black, Steve Martin and Owen Wilson. While through most of my life folks often referred to the swamp as “the ditchbank country by Meadowlands,” it now has an official name: The Sax-Zim Bog.

Visiting friends and family in Duluth last weekend, I took Mom for a Sunday drive up to the swamp to see what we might see. I follow the Sax-Zim Bog Facebook page, which has daily postings of great gray owls and other birds that people are seeing and photographing there. I figured even if we didn’t see any owls, at least we’d see some birders.

We drove U.S. Highway 53 north from Duluth and turned west on the Meadowlands cutoff, County Road 133. Soon we saw a road sign welcoming birders to the Sax-Zim Bog. I knew the bog had a visitor center, but it wasn’t easy to find. Finally, we stopped and asked two birders, bundled up for the below-zero cold, who were walking along a sideroad. They gave us directions and, better yet, a map to find our way. The turn-off from 133, north on County Road 229, is unmarked.

As we pulled into the Sax-Zim Bog visitor’s center’s small parking lot, it was clear the place was for the birds. Redpolls and chickadees swarmed around bird feeders. A few feet away, a man dressed in full camouflage had a camera on a tripod trained on the feeders. The camera lens, also camouflaged, was the size of a howitzer. The fellow said nothing as we walked by.

It was warm inside the small building, where two women volunteers were behind the counter to answers questions and assist birders. Across the room, four guys were making bird talk, which from what I could overhear is an awful lot like fishing talk, including the requisite B.S. As I signed the guestbook, the women behind the counter told me they had guests from as far away as Louisiana in the previous few days. Stepping back outside, I saw two whisky jacks, or gray jays, by a big chunk of suet, which made my day. Even though I live in the north woods, I don’t see these “camp robbers” as often as I used to.

Walking back to the truck, a car pulled into the lot. A magnetic sign on the door marked it as a birding guide service from Duluth. In another parallel to fishing, birding has become so popular that you can hire a guide to take you to the hotspots. The fellow in camouflage still had his howitzer pointed at the feeders.

Armed with our map, which highlighted driving routes and locations we were likely to see various birds, we headed out. We passed state wildlife management areas, which were large wet meadows and willow flats managed for sharp-tailed grouse. Driving beside a black spruce bog crisscrossed with snowshoe hare trails in the snow, I slowed down to see if we could spot one of the big, white bunnies. We did not. In several places, we saw where birders had pulled over and tromped into the woods. Even though it is February, the snow remains shallow enough that you can get around without snowshoes.

We drove up Admiral Road, which was noted as a good place to see a great gray owl. We did see a large raptor perched in a tree across a field. When it flew, I was pretty sure (not positive) it was a northern harrier. A little further up the road, we came to some feeders the map said were the best place in the state to see boreal chickadees. I’ve seen a million black-capped chickadees in my day; never a boreal. Of course, the only birds at the feeders were a pair of black-capped chickadees.

At the intersection of County Road 7 and the Stone Lake Road, we saw a flock of birders beside a mini bus. As we turned on the Stone Lake Road they gestured to us, so we stopped to see what they were looking at. They pointed out a northern hawk owl perched atop a communication pole along the railroad tracks about 50 yards away. At that distance, it was simply a small bird sitting on a pole. On the way back, we looked at it with binoculars. It was still a small bird. I saw a closeup photo of the same bird on Facebook the following day. It was stunning. I guess it pays to have a howitzer camera lens.

We drove into Stone Lake for nostalgia. Years ago, my uncle owned some property there. I can remember visiting the lake as a child. On the drive up, the adults were talking about the first episode of the Mary Tyler Moore Show, which had premiered that week. That was a long time ago. I also remember my Dad talking about the time he and a friend had pitched a tent and hunted deer there one November in the 1950s. He shot a buck in fresh snow and dragged it across the newly frozen lake, breaking through the ice as he neared the shore. That was an even longer time ago.

At the end of our excursion, we stopped for a burger at the venerable Wilbur Café in Cotton.

“From all the hype, I thought we’d see all sorts of owls,” Mom said.

Even though we didn’t see a great gray owl, we had fun exploring the Sax-Zim Bog.

Bison, pigeons & wolverines: A glimpse into the past 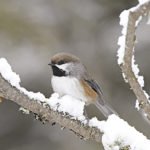