In the world of television hunting shows, the hero always gets his deer. Most often we see footage of the mighty stag prancing around near the hunters’ stand like a cow in a pasture. After some tense whispering with the camera man, our hero aims at the buck and squeezes the trigger. Then we are treated to the “kill shot,” often replayed in slow motion so we can watch every agonizing gyration of the animal’s mortal throes. If that isn’t pornography, I don’t know what is.

If there is snow on the ground, this isn’t a big deal, because a running deer leaves tracks. When there isn’t snow, following a deer through the woods can be challenging—very challenging. Even a mortally wounded deer can go some distance before it expires. Depending on where the animal was struck by the bullet and the cartridge used by the hunter, it may run 50 yards or more before it begins to bleed. The blood trail may be difficult to find and follow.

A couple of years ago, a friend shot a buck with a .260 Remington as it walked about 30 yards away. He was certain he’d made a good shot, but no blood was evident when he began following the whitetail. Tracking the animal for a quarter mile through dry, fallen leaves—no small feat—he eventually lost the trail, but not his conviction that he’d fired a fatal shot. Hunting in the same area over a week later, I stumbled upon the dead buck, not far from where my friend lost the trail. Although spoiled, the deer was still intact. I found the bullet wound behind the front shoulder—where it ought to be—but it didn’t appear to have bled from the wound. I don’t know why not.

Tracking wounded deer is a part of hunting. Often you can easily follow an obvious blood trail and soon come upon a dead deer. However, in many situations the blood trail difficult to discern. That’s when you need good tracking skills.

Last week, I finished off a day-long deer hunting class with a field session on following a blood trail. My three students, novices all, had spent some time walking in the woods with me looking for sites to place deer stands, finding deer sign and learning more about how north woods whitetails relate to their forest environment. Then I sent the three of them off to scout on their own for 20 minutes while I laid out a pseudo blood trail.

The students set off on their scouting expedition. I went to work. In my pocket were three small bottles of phony blood which I found in the Halloween costume section at the local five-and-dime. I started out by scuffing up the fallen leaves to simulate the spot where the imaginary deer was struck by the shot. Then I began walking, kicking up the leaves to leave some sign. About 30 or 40 feet from my starting point, I dribbled a few drops of blood.

The forest floor was damp from a light drizzle that ended a few hours previous. I quickly learned to carefully leave blood drops on large leaves, birch logs and the like to be sure it was visible for the students. I was surprised to find when drops landed elsewhere on the forest floor, they disappeared. Like a wounded deer, I went in a straight line through the brush, occasionally veering at a sharp angle to my course. Sometimes, I’d walk a short distance before leaving a few more blood drops. I was able to go about 200 yards before running out of fake blood. I left the empty bottles at the end of the trail as the final prize for my student trackers.

When my students started out, I gave them a roll of flagging tape and instructions to work as a team, leaving one person standing where they found the last blood drops while the other two walked ahead to look for more. I told them to use the flagging tape to mark the blood trail. They started slowly, trying to spot the blood drops and discern the phony wounded deer’s trail. It wasn’t long before they picked up the pace, leap-frogging one another as they moved from one spot of blood to the next. When they eventually reached the empty blood bottles, they had enough confidence to track a real wounded deer.

The cool thing about teaching someone a new skill is you learn something, too. I was surprised to discover how difficult it is to see blood on the forest floor, even as you are intentionally laying out a fake blood trail. I wonder if all hunters make a thorough search for blood after they shoot at a deer. Compared to some real blood trails I’ve followed and successfully recovered the deer, my simulated blood trail was a cakewalk.

At first the students asked why we were using flagging tape to mark the trail. Soon they realized the flags made it easier to follow the wounded deer’s course through the woods. Once we reached the simulated dead deer, they also realized the flagging would make it easy to find the deer again if they had to go get someone to help haul it out. We took down all of flagging tape when we were finished with the lesson.

I’d like to think my three students gained enough knowledge and confidence to shoot their first whitetails this November. If they do, my own hunting experience suggests at least one of them will have to follow a blood trail to find the fallen deer. If so, they’ll at least know how to do so. As for me, I hope any deer I shoot drops at the shot. Our little trailing lesson reinforced something I already knew. Without snow on the ground, following a blood trail is never easy. 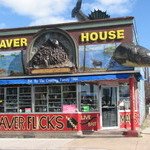 Points North: Sale of the Beaver House Marks End of an Era in Grand Marais