Sometimes, fishing makes for odd boat fellows. Four of us had planned to go brook trout fishing, but two of our party bowed out. The other guy and me, strangers to one another, were left to share a boat. Since I generally don’t go fishing with strangers, I could have bowed out as well. But the other guy had driven nearly 300 miles to go fishing. It seemed a shame to let him down. So we agreed to meet in Grand Marais for breakfast.

And that’s how I met Grant Merritt, Twin Cities attorney, environmentalist and descendant of the famous Merritt brothers who discovered the Mesabi Iron Range. He arrived at the restaurant a few minutes after me, which fortunately gave me time to look at the menu. Merritt, who is 79, likes to talk and tell stories. Conversation came easy when he sat down at the table. The waiter had to return twice before we were ready to order. Grant kept on talking after breakfast arrived, and, though we lingered long, never did finish his meal.

Before we left the restaurant, I’d learned that we both grew up in Duluth. I heard a little about the Merritt family’s long history on Isle Royale, where they still have property in Tobin Harbor. The Isle Royale connection meant that he knew many of my neighbors in Cook County, because they, too, have Isle Royale connections. Because he owns some property in Hovland, where I live, he knew many of my friends and neighbors there as well.

We headed out into the woods in search of brook trout, planning to fish a little lake that is often productive. As any North Shore angler knows, spring and early summer are the best time to fish for brookies. The water is cold then and salvelinus fontinalis, the little salmon of the springs, are hungry and active. Some folks say this makes brook trout easy to catch at that time of year.

Thus we started out with high hopes. Grant had some recent fishing reports that action had been “slow.” With the optimism that compels every angler to make another cast, we were certain we’d do better. We pushed off in a small boat. I rowed. Grant talked. Both of us fished.

Some of the conversation revolved around fishing. Having spent time on Isle Royale since childhood, Grant had plenty of stories about catching lake trout. While the island is legendary for trophy-sized trout, these days he prefers to catch the five-pound “eaters.” Besides, you can catch the smaller trout on shallow reefs, but you need to go deep with a downrigger to get the big ones.

Like most North Shore anglers, we’d both caught a few brook trout over the years. Grant had a great, not-for-print tale about a local outlaw who fished for brook trout with a gill net. His “trophies” were trundled off to a taxidermist and mounted. Once on someone’s wall (not necessarily the netter’s), they were passed off as being caught by fly-fishers. So it goes sometimes in the North Woods.

From fishing, the conversation strayed into Minnesota politics. Grant is the sort of guy who proudly calls himself an environmentalist. But he is not some granola-chewing, half-baked hippie. He might be better described as a member of the Establishment who joined the state’s environmental movement during its formative years—the 1960s and 70s. Appointed in 1971 as the second head of the Minnesota Pollution Control Agency by former Governor Wendell Anderson, he played a key role in the landmark environmental decision that stopped Reserve Mining from dumping taconite tailings in Lake Superior. In doing so, he made friends—and enemies.

“There are still people who claim I’m anti-mining,” he says. “I’m not anti-mining. I come from a mining family.”

Instead, he simply believes that if an economic endeavor is worth doing, it ought to be done right. Such common-sense pragmatism is often lost in the shrill rhetoric that characterizes debate over environmental issues, but it remains the backbone of sound environmental policy and conflict resolution. Although Reserve Mining eventually closed after Judge Miles Lord ordered the company to dispose of its tailings on land rather than in the lake, the closing was largely the result of sharp downturn in the nation’s steel industry. The plant subsequently reopened and continues to be a major producer of Minnesota taconite.

Grant remains active in environmental issues, both as an attorney and as an activist. As an attorney, he’d just met with DNR staffers to discuss a case regarding the control of lake levels. He once represented former Governor Jesse Ventura and his neighbors to help them protect a local wetland slated for development. Later, when Ventura was elected to the state’s highest office, he tossed his hat into the ring to become commissioner of the Minnesota DNR, a job that eventually went to Alan Garber.

“I don’t think they even considered me,” he said with a laugh, “because they knew my reputation as a hell-raiser.”

As an activist, he is a member of the Minnesota Parks and Trails Council and the Walter J. Breckenridge Chapter of the Izaak Walton League of America. He strongly believes in the need for wild places and green space for Nature and people.

“Look at how much parks are used now,” he said. “They’ll become even more important as the population grows. We may need three times as many parks in the future.”

We talked away the day as we fished. I don’t think the quality of the conversation had any to do with our lack of success. We went up one side of the lake and down the other, trying all of our favorite trout lures. Neither of us had a bite. Finally, late in the afternoon we went to shore for a belated lunch. As we ate, angry storm clouds appeared above the pines. We quickly packed up, hoping to make it to the vehicle before the rain arrived. We didn’t. Soaked, we started home, stopping once to move a freshly fallen tree from the narrow forest road. Even though the brookies weren’t biting, we agreed it was a good day of fishing. 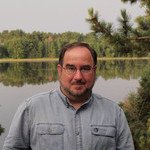