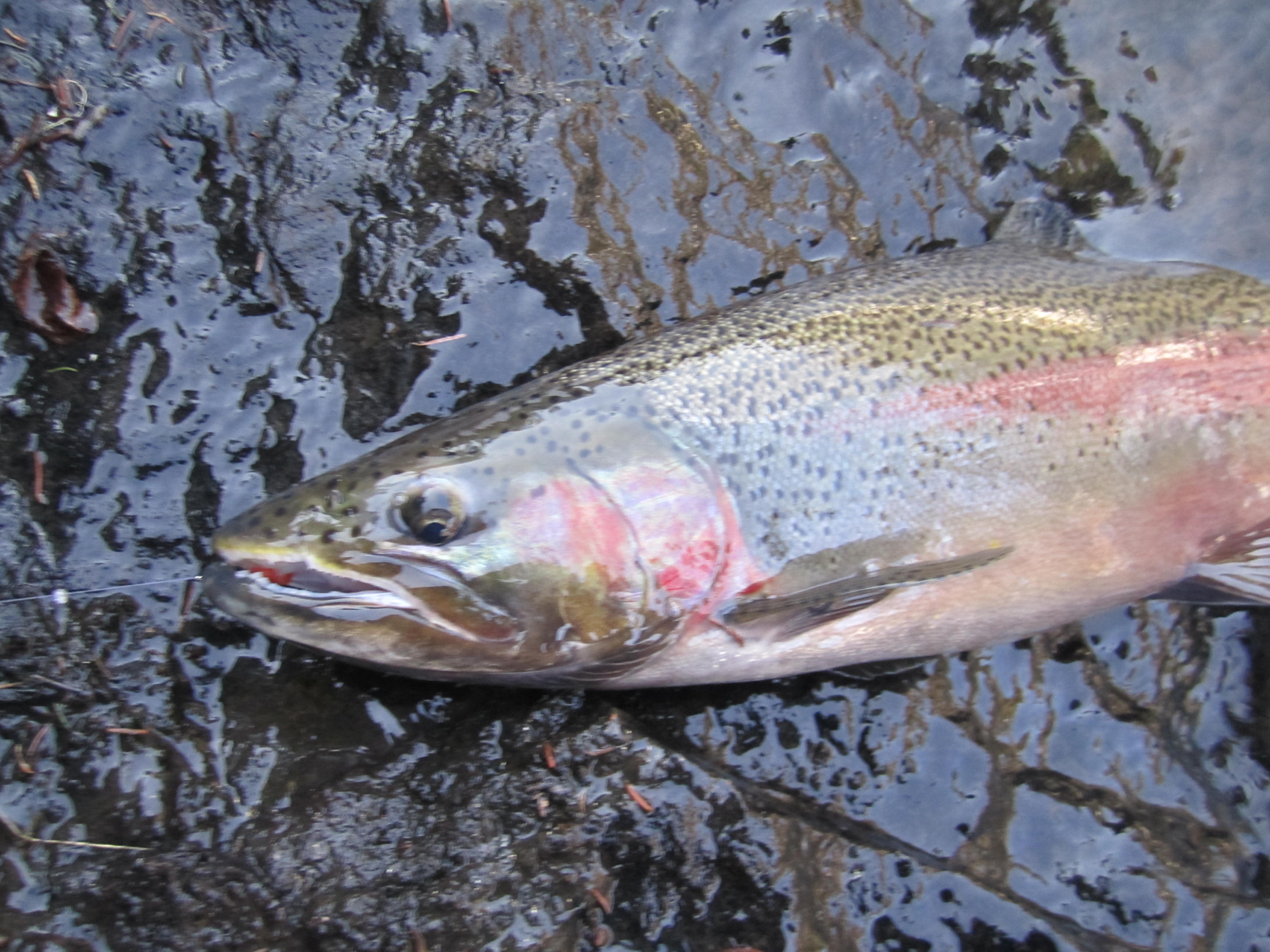 The float did a lazy loop in the back current, carrying a spawn sack through a deep, slow-moving pocket on a North Shore trout stream, just the place to find a cold-funked steelhead when the water temperature is a degree above freezing. Suddenly, the bobber went down. I set the hook and felt nothing; a clean miss.

I flipped the spawn sack back to the same spot. Odds were good that the fish, or another, would strike again. When the float went down the second time, I connected with the steelie. The drag on my fly reel played a familiar tune as the big rainbow went down and away. It tried to go down river, but I turned it in the tail out of the pool. The trout swam back up to the relative security of the pool’s depths.

The battle seemed to be turning in my favor, but one thing was wrong with the picture. I was standing on a rock ledge, five feet above the river. And I was wearing street clothes, because I’d stopped to make a few drifts on my way to work. Looking around, I could see one place where I could pick my way over snow and ice-covered rocks to reach the water’s edge. One slip while doing so and I’d be bruised and soaking wet. 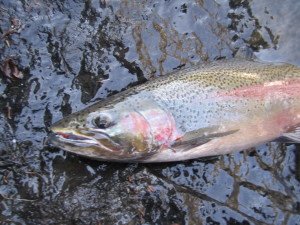 So slipping wasn’t an option. Grabbing the brush with one hand and holding my fly rod in the other, I picked my way along the rocks. Paying attention to the fish on the end of your line and the icy rocks beneath your feet is actually easy when the adrenaline is flowing.  Unbruised and dry, I was soon standing on the water’s edge.  I eased a colorful male steelhead onto a rock shelf, took his picture and let him go.

A couple of days later, the rock shelf where I landed the fish was beneath a foot of water. Spring had arrived in the North. Warm sunshine unleashed a torrent of icy cold snow melt, putting a chill on the fishing. By the time you read this, North Shore river flows will stabilize, triggering the annual spring steelhead run. Now is the time to go fishing.

If you are driving a distance to reach the North Shore, be forewarned that steelhead fishing provides no guarantees. Rain may raise river levels. Dry spells may cause them to run low and clear. A cold front can make for tough fishing. Stream conditions change from day to day, so it’s impossible to predict when will be the best time to fish.

Minnesota’s North Shore is 150 miles long and runs northeast. Due to latitude and proximity to Lake Superior, the North Shore has the longest winters in the state. On top of that, spring arrives in Duluth at least a week before it reaches Grand Marais. Bottom line: Whatever weather you have in the Twin Cities don’t mean diddly on the North Shore. Last Saturday, for instance, I walked through knee-deep snow while out with my dogs. By my estimation, at my North Shore home about 14 inches of snow has fallen so far this month.

Steelhead migrate upstream from Lake Superior to spawn. Their migration stops at the first impassable waterfalls that blocks their ascent. Often this occurs within a few hundred feet of the lake, which limits the places where you can fish for them. Experienced anglers all have special spots, sometimes no larger than your bathtub, where they like to fish. Most, including this angler, are loathe to share their secrets with anyone. For a beginner, this can make the question, “where should I fish?” maddeningly difficult to answer.

You can answer the question various ways. The best is to go fishing with a knowledgeable angler or hire a guide. You’ll learn more in a day fishing with them than you will in two years of trying to figure it out on your own. The other way is to start out on a popular river, such as the Knife just outside of Duluth. Along the Knife there are no secrets. Folks you meet along the river will share information. You can also watch how other anglers fish and see where they catch steelhead. Or you can just go fishing.

Gearing up for steelhead fishing does require some specialized tackle. The spinning rod you use for walleyes won’t cut it. Most anglers use 7 to 9 weight fly rods, which make it easier to control your line in river currents. How fly rods are rigged for fishing varies considerably. Some anglers use floating or sinking fly lines to cast weighted flies. Others use a thin-diameter running line and a specialized sinker called a slinky to lob and drift flies along the bottom. Old schoolers like me use 8-pound-test monofilament and sinkers to lob yarn flies or spawn sacks.

Whatever method you choose, the key point to remember is: Keep your fly within a few inches of the bottom. In cold, strong North Shore currents, that’s where the steelhead are holding. While they may move sideways to go after a drifting fly or spawn sack, it must be presented at their level. Rarely do they rise in the water column to strike a fly or bait.

The strike of a steelhead is steeped in myth. Some say they don’t eat because they are spawning, thus they strike as an instinctive or reflex action. Others say the strike of a steelhead is so subtle you may not feel it. Still others opine they never bite and are hooked in the mouth by accident. Then there are the perpetually unlucky souls who will tell you steelhead are imaginary fish, because they’ve never caught one. In reality, steelhead are ready biters much of the time they are in the river. As with jigging for walleyes, sometimes you’ll have a jolting strike and other times you’ll lift up and discover you are fast to a fish.

Beginners find steelhead are hard to catch for two reasons. The first is that you must master specialized fishing techniques. The second is that you must be on the river at the right time.  Accomplishing the first is a matter of practice. The right time is now. Steelhead are running on the North Shore. You can count on fish being in the rivers for about a month, although the prime fishing will be within the next two or three weeks. If you want to catch a steelhead go now…and good luck! 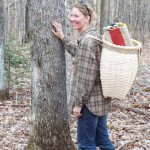