Mille Lacs, the most famous of Minnesota’s 10,000 lakes, was once known as the world’s greatest walleye factory. The shallow, windswept basin was perfect walleye habitat. There was no need to stock Mille Lacs. For centuries, Mille brimmed with a natural abundance of walleyes.

This spring, the Minnesota DNR announced open-water walleye fishing on Mille Lacs will be catch-and-release only, because the present population can’t sustain a harvest. This was followed by an announcement that the agency plans to create a “campus” on Mille Lacs shore that will house a walleye hatchery and possibly a fishing museum. Irony, anyone?

Full disclosure: In a lifetime of angling, I’ve fished Mille less than a half-dozen times and only once on open water. Big lake walleye fishing isn’t my thing. So I don’t have a dog in this fight. Were it not for my professional interest in Minnesota’s outdoor issues, mostly likely I’d be only vaguely aware of the Mille Lacs situation. This is very likely true for the vast majority of Minnesotans.

Anglers and others who are keenly aware of the big lake’s issues and do have a dog in the fight must bear this in mind. Many Minnesotans aren’t feeling your pain. The cause of it isn’t even on their radar screen. This doesn’t mean the issues aren’t important. It’s just the way it is.

Those who have paid attention to Mille Lacs’ troubled fishery can point to a watershed moment that led to a change of management at the walleye factory and, some would say, was when the walleye troubles began. In 1999, the U.S. Supreme Court affirmed rights of the Ojibwe to hunt, fish and gather on lands and waters ceded in an 1837 treaty in the case titled: Minnesota vs. Mille Lacs Band of Chippewa Indians.  The decision affirmed the right to harvest fish from Mille Lacs to eight Ojibwe bands in Minnesota and Wisconsin.

In order to divvy up the fish and give all parties a say in fisheries management, the state and tribes embarked upon a process known as co-management. After determining a safe harvest level, based upon how many walleyes can be taken from the lake without affecting the population’s sustainability, annual harvest quotas are declared for the tribes and state. The tribes use nets to harvest their fish. State-licensed anglers use hook and line.

This difference in harvesting methods has been cause of much consternation among Mille Lacs anglers. After all, past history at places like Lake of the Woods, Red Lake and Rainy Lake have shown that, in Minnesota, nets and walleyes don’t always mix. Then again, all of those walleye filets in your local grocery store or favorite restaurant are coming from somewhere beyond Minnesota where commercial netting occurs.

Of course, the Mille Lacs situation is compounded by politics, social issues and racial tensions. It’s hard to get through that quagmire and simply talk about fish management. But unless a way is found to do so, we may not be able to fix whatever is broken at the walleye factory.

Let’s be blunt. The current situation is untenable for anyone, state or tribal, who seeks to harvest walleyes from Mille Lacs. While it may be a gesture of political appeasement (let’s give ‘em something), the fact the state has decided to build a hatchery to bolster a walleye population that was once a model of natural sustainability suggests a simple question: Is co-management working?

This isn’t a question that can be answered by politicians, tribal elders, fishing guides, editorial boards or even the Supreme Court. Nor is it an indictment of anyone who is trying to do their job within the present co-management framework. But it is a fair question that should be studied under the impartial gaze of academia.

If Mille Lacs actually was a factory and production was faltering, the corporate board and shareholders would certainly try to discover why it was happening. No doubt the factory’s management would come under scrutiny. And the board would take the steps necessary to improve the factory’s performance. Of course, it is simplistic to compare a privately owned factory with a public natural resource shared by two nations (in 1837, the tribes signed a treaty with the U.S. government), which is the reality of Mille Lacs. But the basic premise remains the same.

Plenty examples exist of collaborative management exist within natural resources and industry. But, to my knowledge, academia has not addressed this aspect of treaty rights at Mille Lacs. I don’t doubt state and tribal fisheries professionals are doing whatever they can to improve Mille Lacs walleye woes. Nor do I necessarily believe that what’s gone wrong is simply a matter of overharvest whether by nets or angling.

However, it is difficult to know what’s wrong with the lake or if we are getting the best fisheries management when not all parties involved will agree to full transparency of management actions. The long-standing closed door co-management meetings which bar not only the public, but also the press, do little to build trust and faith in the process. Perhaps the reason academics haven’t studied the social and biological implications of Mille Lacs co-management is that not all parties would agree to a study. But when you can’t bring home a walleye for supper from the world’s greatest walleye factory, I think most everyone can agree on one thing: Something is terribly wrong. 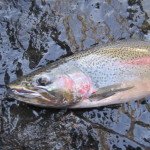 Points North: Steelhead are running on the North Shore