It took some cajoling to convince Gary Clancy to write a column for Minnesota Outdoor News. At the time, he was devoting much of his writing effort to nationally distributed hunting magazines. His primary topic was hunting white-tailed deer. Hunting hard for several months in several states every autumn, he built a deserved reputation as a deer hunting expert.

Such a guy could rightly ask, why write for an outdoor newspaper that paid writers less than national magazines and saddled him with a weekly deadline to boot? I didn’t have much of answer.

“I think you’ll like it, Gary,” I said. “Writing for Outdoor News has been good for me and I think it will be for you, too.”

I no longer remember all the details, but Clancy agreed to begin writing regularly for Outdoor News. He brought a perspective that was badly needed by the publication then and now. He was an every-day Minnesota outdoorsman. He fished for walleyes, crappies and muskies, and knew more than a little about catching everything from catfish to brown trout. In the fall, he chased everything from ruffed grouse and pheasants to his beloved white-tailed deer. In the winter, he was a passionate predator hunter. In spring, he was one of the pioneers of Minnesota turkey hunting.

I was familiar with Clancy’s work from my years as an editor for outdoor magazines. He was always available for a wide variety of assignments and could be counted on to get the work done on time. Best of all, he sent a selection of photos along with his stories.

Although some refer to Clancy as a “classic” outdoor writer, it must be noted that he mostly worked during an era–the 1970s-90s–when classic outdoor prose was replaced with simplistic how-to stories, pseudo-scientific treatises and shameless product promotion. What set Clancy apart from the pack was his ability to relate to the common sportsman. You can learn a lot about deer hunting by reading his stories, but you won’t feel like you are being lectured by some nutty professor. Instead, you feel like you are sitting an easy chair in his living room, having a conversation about hunting.

Because he spent so much time hunting and fishing, Clancy was often out there alone. This presents a challenge for a working outdoor writer who must deliver photos as well as words. As a result, Clancy mastered the art of taking selfies decades before it became trendy. He would set up a tripod with the camera on self-timer, then hustle back into the scene. He was doing this in the pre-digital era, when you had to develop the film before you knew the results. One can only wonder how many times he looked through his slides when they returned from the processor and discovered he didn’t get the “money” shot.

The discipline necessary to produce a weekly column allows a writer to hone their technique. That was evident in Clancy’s work during the many years he wrote for Minnesota Outdoor News. His column topics were always timely and as time went on his tone became increasingly conversational. He was writing directly to you. Every writer needs an editor, so it must be noted that he had the good fortune of working with one of the best outdoor editors in the business, Rob Dreislien.

I’d like to say that Clancy and I were great buddies, but that isn’t true. Since we lived at opposite ends of the state, our paths crossed but occasionally. I brought him fishing on the North Shore one September weekend during the short heyday of the Chinook salmon runs in the 1980s. As I recall, he became as excited as a little boy when he tangled with 20-pound salmon. Years later, he repaid the favor by helping two friends and I gain access to some prime southeastern Minnesota turkey ground.

As an outdoor writer, Clancy gave me a piece of advice that I haven’t forgotten. Knowing that I spent a lot of time outdoors, he told me to continue doing just that. He believed that being out there was the only way you could be an authentic outdoor writer.

“Too many outdoor writers only go hunting or fishing when they are on a sponsored trip,” Clancy said. “They really don’t know much about the outdoors.”

Over the years, I’ve followed Clancy’s advice as best as I could. I try to evaluate my life by the amount of time I spend outdoors. Sometimes that time is spent hunting or fishing. At other times I forage for berries or mushrooms. Very often, I’m off on long walks with my dogs. It all adds up.

Last week, Gary Clancy received relief from his long suffering with cancer. We can be sad for ourselves, but we ought to be happy for him. Wherever he’s gone, I’m sure it’s a place where the bucks run the ridges in the fall and walleyes are always hungry.

My mother’s oldest sibling, Sr. May Jane Casey, also passed away last week. She was less than a month away from her 90th birthday. A member of the Benedictine order of Catholic nuns, Sr. Jane lived an exemplary life.  She was an elementary school teacher, primarily first grade, who taught thousands of students through the course of her career. I mention this because there are almost certainly readers who went to Catholic schools in Duluth, Hibbing, International Falls or other northern Minnesota communities who will remember her. She remained very active after retiring from teaching and was making weekly visits to the elderly and shut-ins in Duluth until her advancing age forced her to slow down a couple of years ago. She had an amazingly sharp memory. Last Christmas, while visiting with Mom and I, she began recalling stories of her grandparents, reaching back well into the 1800s. The distant past was suddenly very alive. We’ll miss Sr. Jane. 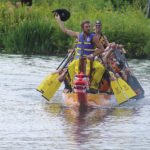