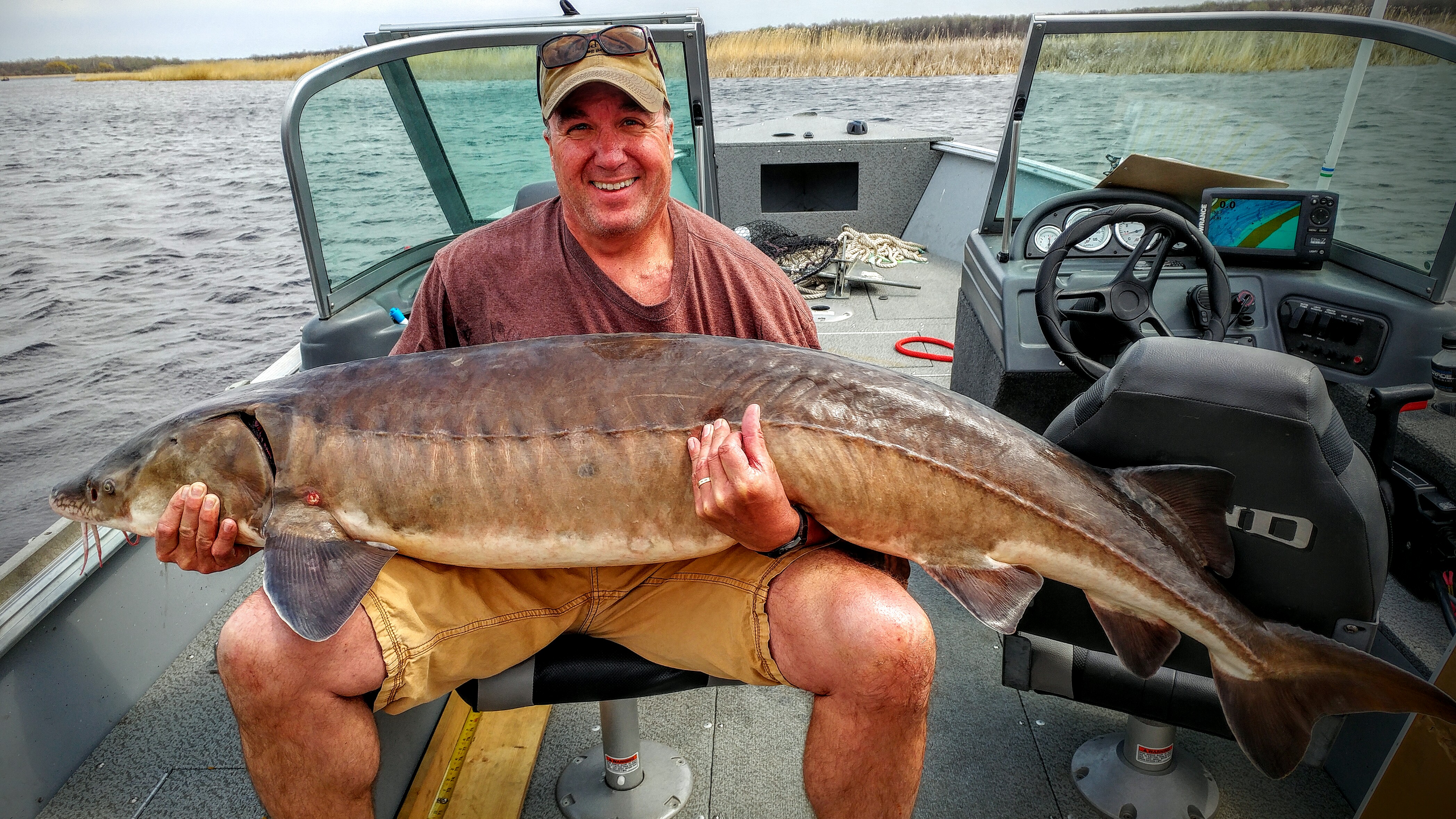 Joe Anderson of Central Lakes caught and released a Rainy Lake sturgeon that may have topped the official state record while fishing in a tournament held by Sportsman's Lodge on May 6.

Sometimes, even when you successfully catch the big one, something still goes awry. Just ask Joe Anderson of Central Lakes, south of Eveleth. On May 6, he caught and released a sturgeon on the Rainy River that may have been the state record, but he won’t get official recognition for his catch. Nevertheless, he has the distinction of landing the biggest fish anyone has caught in Minnesota in a long time.

“I don’t know if it’s sunk in yet,” he said of his record-sized catch.

With what can only be described as fisherman’s luck, he caught it on his first day of sturgeon fishing. A friend who was unable to make the date asked Joe and his wife, Sandy, if they wanted his tickets to the annual sturgeon fishing tournament held at Sportsman’s Lodge in Baudette. The Andersons fished in the contest with his sister, Jill, and her husband, Andy Strom, also of Central Lakes.

The sturgeon rookie used heavy spinning tackle with 20-pound-test monofilament line.  Anderson’s terminal gear was a 3/0 circle hook baited with “as many nightcrawlers as I could fit on it” and a 3-ounce no-roll sinker. It wasn’t long before he had action, landing a 37-inch sturgeon.

“We thought that was big,” he said.

Then Andy landed a 50-incher.

“We thought that one would win the tournament,” Anderson said. “Then some guy in a boat near us landed one that was 64 inches.”

It was not long after noon when he hooked the big one. While the group knew Anderson was tangling with a very large fish, they were still surprised when they saw just how big it was.

“When it jumped, we knew it wouldn’t fit in the net,” he said. “It did a back flip like a whale.”

The battle was long and hard fought. Jill tried to video it, but her camera battery went dead after the first 30 minutes. Anderson fought the fish for at least another 30 minutes.

“I was just praying the knots would hold,” he said.

Jill made a lasso out of the anchor rope and when her brother got the sturgeon near the boat, unsuccessfully tried to slip it around its tail. Eventually, Andy slipped the lasso around the tail “just like Wicked Tuna” and Jill got the head of the fish in the net. Together, they heaved it into the boat.

“There were lots of high fives and curse words then,” Anderson said.

Following tournament rules, they raised a flag to indicate they’d caught a fish and a judge boat came to document the catch. The judges took Anderson and his sturgeon into their boat, where the fish was measured and photographed. Then the monstrous sturgeon was promptly released.

“The only bad part was we didn’t take a picture of the measuring tape alongside the fish,” he said. “You need that for the Minnesota catch-and-release record.”

The judges measured the sturgeon at 70.5 inches in length with a 28-inch girth. The current state record measured 70 inches with a 26-inch girth, weighed 94 pounds, 4 ounces and was caught in the Kettle River in 1994. Ironically, although he was fishing in a catch-and-release tournament, Anderson couldn’t have kept his trophy. The sturgeon bag limit on the Rainy River is one per year between 45 and 50 inches in length or over 75 inches.

When all was said and done, Anderson knew he’d been in a scrap. He couldn’t feel his thumb or three fingers on his right hand.

“I tired the fish out and it tired me out,” he said.

Although they kept fishing, the group didn’t catch any more sturgeon. Jill had the distinction of catching the largest sucker in the tournament, a 24.5-inch brute. She won a “bucket of goodies” Anderson said. He had a better payout. There is a cash prize for the top two fish each day of the tournament. He won $2,150 for the largest sturgeon on the first day. He won an additional $500 for catching the first fish over 70 inches, bringing his total payout to $2,650.

Jennifer Norquist, guest relations manager and sturgeon tournament director for Sportsman’s Lodge, said the resort has held the tournament for 10 years. In addition to two days of fishing, at the end of the second day the resort has a prime rib dinner for the teams. Per state rules, the tournament is limited to 50 boats. There is a waiting list to enter future tournaments.

“Our policy is to let people in the tournament rebook for the next year over the weekend. During the last four years, we’ve been filled before the weekend was over,” Norquist said.

Anderson has reservations for next year’s tournament. But he plans to get in plenty of fishing between now and then. He recently retired from a career as a firefighter for the National Air Guard. When interviewed, he’d just returned from more than a week at Lake of the Woods, where he keeps a camper at one of the resorts. A trip to Alaska is in the works, where he plans to fish for salmon in the Kenai River and halibut on the ocean. And he plans to spend most of the summer on Lake of the Woods.

“I’ve fished a lot of walleye lakes, but you get spoiled on Lake of the Woods,” he said. “Since I’m not working anymore, I’m going to spend as much time there as I can.”

Points North: Is the U.P. deer situation a lesson for Minnesota?

Point North: Yes, there are turkeys on the North Shore