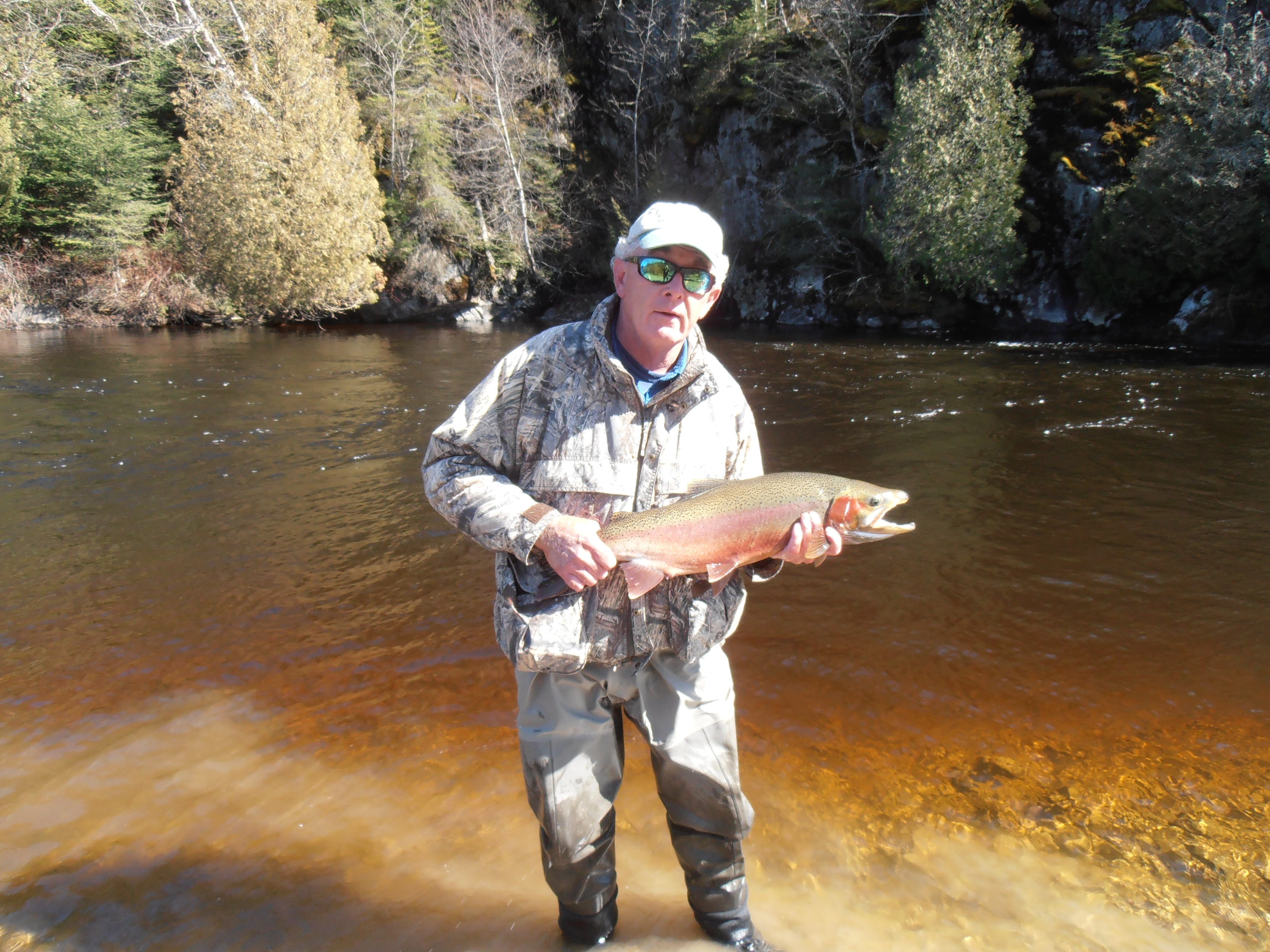 Our favorite trout streams were running low and crowded with anglers, leading to a situation some folks call ‘combat fishing.’ Since we don’t like crowds or combat when we are fishing, my friend Alan Lutkevich of Duluth and I decided to go elsewhere. We’ve spent years roaming the North Shore’s trout streams, so we can usually get away from the crowds.

Actually, to get away from most other anglers these days, all you have to do is walk. Most anglers don’t wander very far from where they park their truck or, on wild Canadian rivers, their ATV. If you can put a mile between your fishing hole and the parking lot, you’ll have little or no company.  So we headed for a river meeting that definition. And we had it all to ourselves.

Well, just us and the fish. We had pretty good action the first afternoon and the next morning. It was certainly good enough we could have continued fishing there for the entire four days of our excursion, especially since the river is a favorite. But we had the urge to rove. The name of another river came up in conversation; one we’ve talked about since we discovered it 10 years ago. Back then, we fished it two days, awestruck more by the beauty of the place than the fishing. The river is so far away that we hadn’t returned, even though we’d talked about doing so.

This time talk convinced us into action. It wasn’t that far from our location, maybe four hours away. Gas was cheaper than it had been in years. And the exchange on the Canadian dollar was in our favor, too. Sure, the fishing plenty good where we were, but it wasn’t the first time we’d walked away from a fish-filled river to seek greener pastures.

We hit the road in early afternoon, planning to make reach our destination early enough to get in a couple of hours of fishing. We booked a pet-friendly cottage where it so happens Ted Nugent and his buddies stay when they are hunting in the area. The cottage was rustic, but nice, with plenty of room for my two yellow Labs, Tanner and Rainy. We gave the place a quick look-see and went fishing.

It was too late in the day to walk into our destination river, so we checked some streams where they crossed the highway. Late in the day we hit a jackpot, finding feisty steelhead in a river where their run was blocked by a waterfall a short distance from the lake. We landed and released a handful of fish in an hour or so, lingering a little longer than we intended. Only one restaurant was still serving when we got back to town and the waitress clearly wasn’t enthused to have our business. But the food was good.

The next morning we got an early start for the hike into the river, a distance of two kilometers along a hiking trail. The dogs ran ahead as we walked through a mature forest of maple and yellow birch, interspersed with occasional spruce, cedar and white pine. The spring ephemeral wildflowers were beginning to bloom, adding tiny splashes of color to the drab forest floor. Beyond the treetops the sky was brilliant blue. We couldn’t have picked a better day to return here.

The river was clear and running at a perfect fishing level. It was as wide as a western trout stream, flowing over a bed of cobble and small boulders. Rugged hills shrouded with rocky crags and white pines towered 1,000 feet over the river. It was if no one had ever been here, because there wasn’t even a boot track in the sand. As we started fishing upstream, a mature bald eagle soared overhead. We took that as a positive sign.

In a place like this, catching a fish is simply frosting on a very sweet cake. Al connected first as we worked a long riffle, playing and then releasing a 4-pound hen.

“She was in the dark water just beyond that big rock in front of me,” he said.

My turn came in the next riffle. A violent strike nearly pulled the rod from my hand. When I set the hook a large trout thrashed on the surface, enraged to be attached to my fishing line. Within seconds it was gone. Sometimes, lightning strikes twice on a trout stream. I kept fishing and soon hook on a second monstrous trout, or perhaps the same fish. This time I was able to hang on as it made reel-shrieking downstream runs. Soon the steelhead was 50 yards downstream from me. Unable to turn it, I began to follow the fish, stumbling along the slippery cobble bottom. Then it started another run. Foolishly, I tried to slow its pace, resulting in an inevitable conclusion. The steelhead pulled free.

The next fish, a more manageable (for me) four-pounder, was an acrobat. It cleared the water four times with head-shaking leaps. When the show was over I released it back into the river. It took all morning to make our way perhaps a mile upstream. The fishing wasn’t fast, but it was very satisfying. Eventually we reached a point where the river came out of a canyon and it became difficult for my old Lab Tanner to negotiate the steep, rocky trail. It was long past lunchtime and we’d foolishly left our food in the truck. Reluctantly, we turned around and started the long, uphill walk to the trailhead.

Driving home the next morning with two bone-tired Labradors, we talked about the unplanned adventure. We’d made an extra eight-hour round trip just to spend a day on an extraordinary trout stream. We agreed it was well worth the time and expense. On the way back, we stopped to fish for a few hours on the river where we started our excursion, another extraordinary trout water. The trout were still there. I capped off the day catching and releasing an exquisitely colored large male steelhead.  As we watched the big trout disappear into the depths, we knew it was time to go home. 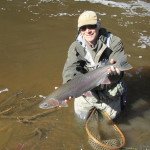