In Minnesota, fishing stocking is a matter of biology, sociology and politics–and not necessarily in that order. Consider the scenarios we are watching unfold this year.

On the once World’s Greatest Walleye Factory, Mille Lacs, anglers must throw back any walleyes they catch this summer. The DNR is planning to build a walleye hatchery/museum complex in an attempt to be simultaneously hopeful for a fishy future at Mille Lacs and nostalgic about a glorious angling past. In the State Legislature, lawmakers are debating a moratorium on plans to stock muskies in a handful of lakes where they currently don’t exist, based upon the concerns of lake users who wonder how the nonnative predators will affect existing fisheries.

And on Lake Superior, a new DNR fisheries plan questions the future of the venerable French River fish hatchery, which is in need of extensive repairs. The future of the popular Kamloops rainbow trout stocking program seems uncertain and the agency has called for the cessation of stocking lake trout in the heavily fished waters near Duluth. I suspect concerned Lake Superior anglers have already begun talking to local legislators.

DNR fishery managers may say that all of the above discussions are guided by biology. To some extent, that is true. But the decisions made about fish stocking programs often have real consequences for anglers. That’s sociology.  And anglers are the folks who pay, via the fishing licenses, the salaries and benefits of DNR fisheries staff. So politicians, ever mindful that disgruntled lake users and anglers cast votes, step into the picture when they hear complaints from constituents regarding stocking plans. That’s politics.

Rarely does a DNR plan to begin new fish stocking or, more importantly, discontinue existing stocking, move forward without Legislative scrutiny. Some may say such legislative oversight is political meddling. Others may call it an example of necessary checks and balances. Depending upon the stocking issue, one, the other or both perspectives are correct.

Years ago, I visited an Ontario fishing camp under the auspices of Outdoor News. Included in our party was a father-son duo from western Minnesota. Both enjoyed the outdoors, but the son was a hardcore–the sort of guy who has the passion and skill necessary to find the hotspots other anglers overlook. He told me about a lake he was fishing near Fergus Falls where, at the right time of year, he hammered big walleyes unbeknownst to anyone else. The abundant walleyes were the result of DNR walleye fingerling stockings, but no anglers other than him had cracked the code for catching them. He was rightfully concerned the DNR would declare the stocking unsuccessful and give it up.

Of course, a couple of years later, the agency did just that on many stocked walleye lakes, angering many among the walleye-fishing public. Fisheries professionals hunkered in their bunkers, seemingly smug that the angry rabble could not storm their DNR citadel. After fruitlessly hurling themselves against the citadel’s walls, the walleye fishing rabble retreated to the State Legislature. There, they found powerful reinforcements.

Once politicians entered the fray, a lengthy battle between DNR fish managers, anglers, fish farmers, lobbyists and legislators dragged on for, as I recall, two legislative sessions. At one point, I talked with a nonfishing state senator who was caught up in the fight. The senator couldn’t understand why the DNR was so unwilling to work toward a satisfactory stocking compromise. In the end, the issue was resolved with legislative action, resulting in a more effective statewide walleye stocking plan that now draws few complaints from anglers.

Fish managers are often reluctant to stock fish, preferring instead to work with naturally reproducing populations. In many Minnesota waters, you really can’t beat what Mother Nature provides, so it is smart to manage and protect what already exists. In other waters, Mother Nature may have been compromised by lakeshore development, agricultural practices, urbanization or invasive species such as common carp. In such waters, stocking may be necessary to provide a recreational fishery.

In other cases, anglers may not be satisfied with the fish species Mother Nature provides.  The ongoing effort to stock muskies in waters where they are not found is one example. Walleye introduction into bass-panfish lakes is another. In the northeast, dozens of lakes are stocked with stream trout, providing recreational fishing in waters where it wouldn’t occur otherwise. All of these stocking programs are popular with anglers.

The drawback of stocking programs is they cost money. Hatchery programs seem to be on the chopping block when the DNR is looking for ways to cut costs. Fish managers often use a cost of stocked fish “returned to the creel” to justify ending a program. Using creel census data, they estimate the number of stocked fish anglers catch and then divide that number by the entire cost of the stocking program. This equation gives them a cost per fish “returned to creel.”

As an example, I’ve heard the Lake Superior Kamloops rainbow trout anglers take home have a “return to creel” cost of over $30 per fish. Maybe so, but is the “return to creel” the best way to measure the cost effectiveness of a stocking program? I drive along the North Shore on a regular basis. From October through June—rain, snow or shine—you’ll see anglers fishing along the shoreline at Lester River, McQuade Harbor and French River. Their primary target is Kamloops rainbows. I suspect that if the expense of the Kamloops stocking program was measured by the hours of fishing recreation it provides, the program would prove to be very cost-effective.

When you consider the additional recreation fish stocking provides, perhaps we should put an increased emphasis on our hatchery programs. This doesn’t mean we should stock fish willy nilly in healthy lakes and streams where doing so isn’t necessary. Instead we should focus on maintaining or increasing hatchery capacity and seek to maximize angling’s recreational potential. Doing so is not only good for fishing today, but leaves Minnesota better prepared to address inevitable habitat loss and declining fish populations in the future. After all, who could have predicted our present need to stock Mille Lacs, the World’s Greatest Walleye Factory? 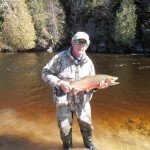 Points North: Not a boot track in the sand 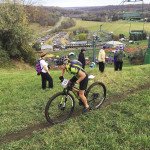