In America exists a people who believe a box store is simply a box with nothing inside of it. They are a simple people who pay off their credit card bills monthly and are satisfied with last year’s model…even when it is 10 years old. These are my people.

I was in Duluth for the Thanksgiving holiday, but on Black Friday the malls and box stores did not beckon. I’m not much for those places at any time, much less on the busiest shopping day of the year. But the weather was balmy and we had an itch to get outside. So Mom and I decided to go for a drive.

We had no destination in mind, which is the best way to start such an excursion. I pointed the truck westward and away we went. Within minutes we were travelling down a rural road neither of us had been on before. After a turn or two on county roads we found ourselves in the lovely community of Esko. Mom mentioned if we continued on the county road, we’d end up in Jay Cooke State Park.

“You know, the parks are free on Black Friday,” she said.

Now we had a destination. We didn’t follow the county road to get there, but instead took I-35 to the Scanlon exit and entered the park from Carlton. As we crossed the St. Louis River bridge below the Thompson Dam, we noticed the water was very low. The St. Louis and its tributaries are controlled by a series of power-generating dams, so the river levels vary. The St. Louis is Minnesota’s mightiest tributary to Lake Superior. In the spring or after a heavy rain, it roars through the park’s rocky rapids in one of the most awesome whitewater displays in the Upper Midwest.

The best place to view the whitewater is from the park’s famous Swinging Bridge, which you may recall was washed away by the 2012 summer flood. The bridge, which is located at the park headquarters, has since been replaced. Both Mom and I have been to the bridge many times over many years. We decided to stop again. Pulling into the parking lot, we were surprised at the number of vehicles there and how many people were walking around and enjoying the park. Clearly, we weren’t the only ones who were taking advantage of the Black Friday free admission.

We took a quick walk through the gift shop without buying anything. Then we went over to another building that contains some displays, including a diorama of the park. Jay Cooke contains interesting topography, because deep valleys have been cut through the clay soils. During the 2012 flood, massive erosion took out the highway passing through the park and reshaped much of the landscape. The highway still hasn’t reopened.

The park holds a special muzzleloader deer hunt every year, which I would like to experience someday. It would be great to roam the hardwood-covered hills and valleys as a still hunter, because northern Minnesota presents few opportunities to hunt similar terrain. For me, such a hunt would also hold a twinge of nostalgia. My father used to tell tales of sneaking across the park boundaries as a boy to hunt whitetails; all the while keeping an eye peeled for the game warden. He wasn’t supposed to be hunting there, but the lure of wild country drew him in. This would have been during the 1940s.

Mom and I walked across the Swinging Bridge, where lots people were enjoying the river and the day. Lingering snow on the walks and trails made for slippery footing, so we went no further. Instead, we headed back to the truck and continued on our way. A new destination came to mind: Moose Lake State Park was just a short drive down I-35. Neither of us had been there before.

The park is located just off the interstate on a small lake with a campground and a boat ramp. But the park’s claim to fame is geologic: it houses an excellent display of Lake Superior agates. Many folks think the best place to find agates is along Superior’s rocky beaches, but the glaciers carried and deposited agates across a large area. Some of the agates in the display were from as far away as Kansas.

While by no means a rock hound, I often pocket interesting rocks. I have a sizeable collection of agates, most of which are smaller than a marble. That’s not what you’ll see at Moose Lake State Park, where some of the stones on display are larger than a softball. We took our time enjoying the rocks, many of which were on loan from private collections. Some were in raw form, others cut and polished. While agates are commonly shades of red, many colors from yellow to indigo were shown. In addition, there were colorful minerals from the Cayuga Iron Range, as well as samples of common Minnesota rocks.

We thoroughly enjoyed our visit to the park. Here, too, we were not alone. Although less busy than Jay Cooke, people were coming and going, taking advantage of the free admission. We weren’t the only ones to forgo Black Friday shopping.

When we left the park, we wandered around the Moose Lake vicinity, driving into the state prison (another first) and pausing to watch a family of swans on a small lake. Instead of taking the interstate back to Duluth, we cut across Carlton County, following county roads through a mix of small farms and forests until we returned to Carlton. Although we didn’t see any wild turkeys along the way, I’ve been told they are common here.

Mom thoroughly enjoyed the day and even bought me dinner. We agreed that it’s a great idea for Minnesota to allow everyone to visit the parks on Black Friday. My only regret was that I didn’t purchase a new state park decal that day. I don’t intend to wait until Black Friday 2017 to return to Minnesota’s wonderful state parks. 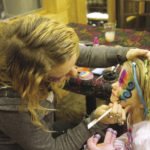 December Events on the North Shore of Lake Superior