Brooks Johnson says Minnesota hunters better pay attention to the DNR’s management strategies if they want to see more deer in the woods in coming years. Johnson, who is president of the Minnesota Bowhunters Association, recently completed serving on the Deer Population Goals Advisory Committee for East-Central Minnesota, a DNR-facilitated “stakeholder” input session intended to set the direction for the future deer population.

The sessions, which were held in various areas of the state with more planned for next year, come on the heels of the lowest deer harvest in 25 years. Whitetail numbers have fallen across the state over the past decade, in part due to a planned population reduction by the DNR and in part due to severe winters during two of the past three years. It is fair to say most Minnesota hunters would like to see a significant increase in the deer herd.

The desire of hunters to see more deer was reflected in recent hunter surveys presented to the stakeholder committees, along with landowner surveys that didn’t always parallel hunter desires for more deer. The committees also had information about whitetail harvest rates over the past decade, as well as other information the DNR considers when managing deer.

What was troubling to Johnson, who is a businessman, not a scientist, was the committees weren’t asked to work with hard numbers. Instead, they were instructed to make their recommendations based on their perceptions of how many deer are in the woods.

“That really bothered me,” he says. “I had been led to believe that we would be working off numbers to which the DNR could be held accountable. There’s no accountability in a perception.”

Johnson believes Minnesota has about one half of the deer it had 10 years ago, when the DNR used a similar stakeholder process to address what was then a record high whitetail population. He contends that aggressive population reduction efforts—allowing hunters in many permit units to harvest two or more antlerless deer—brought numbers below what stakeholders had anticipated.

Now, Johnson wonders if DNR efforts to increase deer numbers based upon stakeholder recommendations from the current stakeholder process will be enough to improve hunter satisfaction, which is currently at low ebb. He believes the DNR should do a better job of monitoring hunter effort—the amount of time it takes a hunter to be successful—as well as the average age of harvested deer. If hunters are expending more effort to kill a deer and those animals are primarily young-aged, Johnson says this may indicate the state’s herd is overharvested.

“The only places that have lots of deer are where people aren’t shooting deer,” he says, referring to private holdings where landowners control the deer harvest.

DNR area wildlife managers play an important role in local deer population goals, because they decide the bag limit options that guide harvest rates. Johnson thinks there should be some public oversight regarding antlerless tag allocations. In some permit areas, the DNR issues more antlerless tags than hunters believe are appropriate.

He also broaches the idea of “micromanagement,” where localized antlerless permits could be issued based upon depredation complaints. He says the DNR has crop damage program for agricultural interests in southeastern Minnesota that could be rolled out statewide. Then, Johnson says, the agency could address depredation hotspots without applying a broad brush to population reduction.

“We could go to separate public land and private land antlerless tags to allow us to have more deer on the landscape, rather than having intensive harvest (five antlerless deer limit) across an entire permit area,” he says.

Johnson also thinks a shorter firearms season may be necessary, too. His stakeholder committee addressed population goals for 11 permit areas in the state’s transition zone between farmland and forest. About half of the permit areas were 100 Series, with a 16-day firearm season, and the others were 200 Series, with a 9-day firearm season. He says the 100 Series had twice the decrease in herd size and twice the hunter dissatisfaction.

“The biggest difference is the 7-day extra gun season,” he says.

Whether or not Wisconsin’s audit resulted in improved deer management is very open to debate in that state. Perhaps even more open to debate is whether enough Minnesota hunters are so upset with the state’s deer management that they will support a call for an audit. While Johnson has some support among hunters for the idea, it hasn’t become a mainstream hunting issue.

One certainty will result from an audit: change. Just what that change may be is anyone’s guess, but if it occurs, it will meet head-on with another certainty—the average deer hunter doesn’t like change. For Johnson, the hoped-for change will mean more deer in the woods and a hunter harvest rising from the current low of about 140,000 whitetails to an average of 225,000 annually.

But one can’t help but wonder if the changes in deer management over the last 10 or 15 years contrived to bring us to our current predicament. We’ve seen legislative- and market-driven changes to deer hunting seasons and hunting methods. And the DNR has restructured bag limits in ways very different from Minnesota’s long standing tradition one tag per hunter. Perhaps now, with the statewide whitetail population at a low level, we’ve come full circle.

While a couple of easy winters and conservative (few antlerless tags) hunting seasons will allow the deer herd to rebound, no one can predict whether future harvests will reach Johnson’s hoped-for goal of 225,000. Johnson intends to keep advocating for more deer.

“I’m gonna keep my eye on the eight ball,” he says. “If you want to see change, you need to stick with it.” 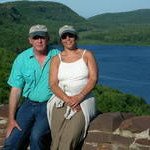 Points North And We Never Made It Home