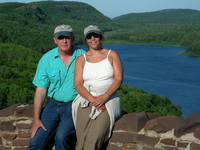 The sunny morning offered the promise of a lovely autumn day as we left Rochester. We headed east on U.S. 14, toward the bluff country and the Mississippi River, taking the scenic way home. In St. Charles I drove past the cut-off for Whitewater State Park. A mile later, I thought better of it and turned around. Whitewater was always a place Vikki and I enjoyed.
We took our time and savored the ride, pulling over once to allow a vehicle that was riding my bumper to pass. Vikki was happy to see a tom turkey beside the road and, moments later, a whitetail fawn. We remarked how the town of Elba was quiet and pretty–our kind of place.
There was much to see. A well-tended flower garden in someone’s yard. Wildflowers. Scarlet sumac hillsides. We paused to watch a family of Canada geese swimming in a line on a roadside pond. Backlit by the morning sun, they were serene silhouettes gliding through a place where nature and art meet.
Vikki got sleepy as we approached the Mississippi and said she was taking a nap. I drove north along the river, thinking about the three days we spent at the Mayo Clinic. Once, Vikki woke, looked out the window and through the trees, muttering “Pepin.” Then she went back to sleep.
They’d sent us home from Mayo after telling us there was no treatment for the tumor on Vikki’s liver. The short version of the story is we stopped briefly at her mother’s home in the Twin Cities and then continued north. We planned to make it home to Hovland that night. We never got there.
Instead we ended up in the Emergency Room at St. Mary’s Medical Center in Duluth. From there it was up to the Intensive Care Unit for two days. Then, in a conversation with a doctor, her 17-year-old grandson and me, Vikki made the decision to stop care. She died Oct. 2 in familiar hospice surroundings–my mother’s home in Duluth.
When we left for Mayo, she told me, “I’m focusing on the positive things and positive people in my life.” And she did. In her final time at Mayo and St. Mary’s, she had a smile for everyone and an attitude to match it. She laughed and joked with family and friends.
Although she’d struggled with chronic liver disease for years, the end came so very quickly. Now the dog and I are alone in the house, surrounded by everything that is hers and trying to find equilibrium. Vikki and I were together for 32 years.
Right now, as I try to sort through what was, is and will be, I’m following Vikki’s lead and focusing on the positive. I keep going back to that sunny morning in the Whitewater Valley and following those pleasant thoughts to so many places. Vikki and I shared a love of the open road.
We pitched and rolled on the North Atlantic as we rode ferry to Newfoundland. In New Orleans, we had beignets and chicory coffee at Cafe Du Monde. Somewhere in the North Georgia mountains, we bought boiled peanuts from two fellas who were cookin’ ’em on the side of the road.
Off Vancouver Island, Vikki watched two killer whales breach beside our boat. We laughed when our late yellow Lab, Casey, was enamored with the mud pots in Yellowstone National Park. We were exasperated when Casey and Vikki’s companion dog of nearly 17 years, Abby, became so enamored with a Nova Scotia beach that they ignored our commands.
We spent a lovely evening in Nelson, British Columbia and, years earlier, explored old Quebec City after dark. We looked for pipestone in southwestern Minnesota, amethyst near Thunder Bay and petrified wood in western South Dakota. It is fair to say I’ve inherited more than a ton of rocks, mostly pretty, a few unusual, and all from Newfoundland to Vancouver Island–and many points in between.

While Vikki loved to travel, she was a quiet homebody at heart. She spent much of the day in her kitchen, which was as much her “office” as a place to cook, surrounded by her teapot and cookbook collections. When it was nice outside she could be found in the yard, toiling away in one of her gardens, where flowers bloomed from spring thaw until freeze-up. Not even the early summer hordes of black flies and mosquitoes could keep her out of the garden.

For years we had a cabin next door to our home where friends and family could stay for short or extended visits. Vikki made sure everyone felt welcome, often going the extra mile with plate of fresh cookies or a perennial from her gardens that folks could take home and plant in their yards. Some folks got extra-special treatment. There was always a fresh apple pie for my father and hot dogs or chicken drumsticks for her grandson, Joe. Really lucky guests were treated to fresh walleye dinners.

Vikki considered dogs to be furry people. They were her friends and companions, starting with Rebel, the yellow Lab who entered our lives while we lived in Georgia, through Tanner, the grieving yellow Lab who shares the house with me today. But over 20 years of our lives were spent with two dogs that went everywhere with us, Casey, a male yellow Lab, and Abby, female shepherd-husky. Vikki said very little after Abby passed away last summer at nearly age 17, but I knew she missed her terribly.

Now I’m missing her. It’s hard coming home to a dark house or realizing we’ll never again take a ride up the Arrowhead Trail to look for moose. All I can do is follow Vikki’s advice to focus on the positive things and positive people in my life. And the many, many happy memories.

Points North Johnson Keeps his Eye on the Eight ball

A Look at the Past and a Comment on the Present