Duck hunters may possess three daily limits of ducks and geese this fall, because federal officials recently upped the possession limits for all migratory birds. The Minneapolis Star-Tribune reports all states are expected to adopt the liberalized bag limit based on the logic that it won’t make a difference in the total duck kill, because the daily bag limit stays the same.

The newspaper quoted Minnesota DNR waterfowl specialist Steve Cordts saying Minnesota hunters kill an average of eight ducks per season, so the higher possession limit won’t even apply to the average hunter. Which leads one to wonder, if loosening the rules to allow hunters to kill more ducks doesn’t matter to the average hunter, why do it?

The cynical answer is because the average hunter doesn’t matter. But raising the possession limit does matter in a big way to the hunting industry. An inconvenient truth of the outfitting business is that dead birds quickly pile up when you pound the marshes with paying customers day after day. Federal wildlife officers take a very dim view of commercial operations that violate bag and possession limits. And hunters who lay down cold hard cash for premium waterfowl hunts want to get most bang (pardon the pun) for their bucks. In recent years, such hunters have complained in duck-hunting publications that possession limits cramp their style.

Apparently, the U.S. Fish and Wildlife Service felt their pain. Or perhaps some well-connected duck hunters found a member of Congress to do some behind-the-scenes arm twisting with federal waterfowl managers. Yet no one should be surprised these duck czars liberalized yet another waterfowl hunting regulation. We are in an era of higher bag limits, longer seasons, modified baiting rules and more. Time and again, waterfowl managers tell us liberalizing rules to make it easier for hunters to kill more ducks “doesn’t make a difference.”

What does make a difference, they tell us, is habitat. As long as ducks have places to live, there will be plenty of ducks. The funny thing is, during the past 100 years we’ve lost an awful lot of habitat in the U.S. and Canada to drainage and development. Yet we are also told ducks are more abundant now than they’ve ever been since waterfowl managers started counting ducks. So what gives?

The reality is duck hunting may very soon come crashing down for average hunters in Minnesota and the rest of the Midwest. For two decades, duck abundance has been propped up by large numbers of ducks nesting in the Dakotas, where natural wetlands and Conservation Reserve Program grasslands provided excellent habitat. This boost in Dakota duck production masked the vast loss of wetland and grassland habitat throughout the prairie duck factory in other states and provinces.

Now the Dakotas are in trouble. As CRP contracts expire, the grasslands are converted to corn. Native prairie is being plowed up to plant soybeans. Wetlands drained and tiled. It won’t be long before the Dakotas no longer have the habitat capacity to produce an abundance of ducks. And the loss of those ducks from the fall flight will make a difference for the average hunter.

Given the sorry state of Congress, it seems unlikely a new Farm Bill will produce any more than conservation triage for the prairies. While the bill may provide new safeguards to discourage plowing native grasslands and incentives for setting aside erosion-prone land, it is very unlikely to give conservation the emphasis it deserves. Farm bill triage may slow the ongoing habitat losses in the Dakotas. But given the demand for commodities, the draining and plowing will almost certainly continue. At any rate, the wetlands and native prairie lost in the corn-growing frenzy of recent years are gone for good.

It may take a few years before the average hunter becomes aware that waterfowl populations are entering a decline that will be very difficult to reverse. Minnesota duck hunters already know the drill, because over the last 30 years their state has diminished from one of the best duck hunting states in the nation to one of mediocrity. The loss of prairie pothole habitat in the Dakotas and beyond will mean even fewer ducks will wing across Minnesota’s autumn skies.

The hunter who pays to play may still have good shooting, even with reduced duck populations. The remaining ducks will be concentrated on the best habitat available, much of which already is owned or leased by commercial hunting operations. This is especially true as you move south along the flyway, where landowners often use cover crops and controlled flooding to attract ducks during the hunting season. Their shotgun-toting customers will keep killing ducks.

A pessimist might say that if present habitat losses in the prairie pothole region continue, then duck hunting opportunities for the average hunter may dwindle away during the coming decade. Average hunters eventually may decide duck hunting has diminished to the point where it is no longer worth doing. The bitter irony is hunters who can afford access to the best habitat will still enjoy the new, higher possession limits. Once hunting rules are relaxed, it is very unlikely they will become more restrictive ever again.

Biologically, commercial operations may not kill enough ducks to have a negative effect on the overall population, even with higher possession limits. Socially, modern duck management keeps lurching ever closer to the European style of wildlife management, where only the wealthy have access to game. In that context, relaxing possession limits will make a difference to the average hunter–a big difference. And that’s why I’m not so sure the average hunter really matters anymore. 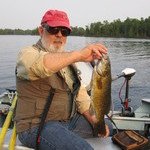