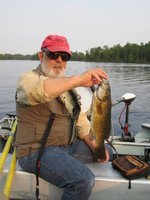 Jim Boyd of Grand Marais caught these smallmouth bass while fishing on a lake with special regulations with the author last week.

Last Saturday, my friend Jim Boyd took me to one of his favorite lakes not far from his home in Grand Marais. He thought we might entice some smallmouth bass to rise to our popping bugs. The lake is hardly secret, but will remain nameless because it is Jim’s fishing hole.

Having heard stories of hidden boulder fields that wreck outboard motors, I’d never fished there. The lake is among a handful in Cook County where all bass greater than 12 inches must be released. You are allowed to keep one bass over 20 inches. Many accessible lakes are overrun with runt bass that rarely reach 12 inches. The regulation is intended to protect bigger bass and thus provide better fishing. After a night on the water, I can tell you this: The regulation works.

We headed across the lake in Jim’s 14-foot boat. In a wide channel between an island and the shore, he shouted over the engine noise that we were suddenly in four feet of water. Then he made a broad sweep of his arm to point out a sizeable area that was “all shallow.” I made a mental note that if I returned, it would be with my canoe.

Our destination was a stretch of shoreline with submerged boulders the size of refrigerators, where Jim had good luck in the past. I started out with a jig and leech while Jim went straight to a fly rod and popper. Although I immediately caught a small bass, the sight of a husky brute taking a swipe at Jim’s popper convinced me to haul out the fly rod.

Fishing conditions were perfect. A light breeze kept mosquitoes at bay, but barely rippled the water. Using an electric motor, Jim kept us parallel with the shoreline and just beyond the boulders. From the bow, I could cast to likely places. I used a 7-weight rod matched with a fast-taper weight-forward line, which allowed me to punch long casts with an air-resistant popping bug. I chose a diminutive Sneaky Pete balsa popper as my offering. Aside from baby ducks and swimming mice, most of the natural foods bass seek on the surface are relatively small at this time of year.

Jim caught the first good-sized bass, which we estimated to be about 16 inches. After a couple of photos, the bass was released. My turn came next. First I caught a little bass, then a nice one. Moving along the shoreline, we had steady, if not fast action. I suspected the fishing would improve as the sun sunk toward the trees.

After fishing Jim’s hotspot, we motored to a nearby island, where we found more boulder bottom. Sparse reeds were growing on a boulder flat that was to be about a foot deep. I started casting the Sneaky Pete along the deep edge of the weeds, a place that often attracts hungry walleyes—and likely bass—at this time of year.

About 40 yards ahead of us, I saw a bass boil on the reedy flat. Jim moved the boat to a casting position. I made one cast to where the bass had been and then another. The third cast was the charm. Sneaky Pete disappeared in a swirl and I lifted into a chunky smallmouth. The fish swam out of the shallows and into the somewhat deeper water beyond. Soon I was admiring the bass while removing Sneaky Pete from its maw.

So began about a half-hour of exceptional fly-fishing. Jim acted as guide while I stood in the bow and casted into the reedy flats. Smallmouth were cruising the shallows, marking their presence with occasional rises. Dropping Sneaky Pete in the vicinity usually elicited a strike. All of the bass ran 16 to 18 inches in length. A welcome surprise was an exceptional bluegill, perhaps the largest I’ve ever caught, that rose from the shelter of a sunken log. Like the bass, it was released.

In the heat of the moment, good fishing seems like it will last forever, but it never does. As daylight slipped away, so, it seemed, did the fish. We called it quits while it was still light enough to motor back to the launch. Along the way, we passed a few walleye anglers who were still working the evening bite. I don’t know if they were catching anything.

The following night I went alone to a favorite lake where I like to fish for walleyes. Smallmouth bass invaded the lake a few years ago and have since proliferated. At the same time, my walleye fishing success has greatly diminished. Where I once expected to go home with a limit of small walleyes, now I feel lucky to catch two or three. Mostly I catch runt bass.

As an experiment, I took my fly rod and trusty Sneaky Pete. The bass were cooperative, so much so that I caught one on nearly every cast. Nearly all of them were less than 10 inches long. I missed a couple of good strikes from what seemed to be larger fish, but the best bass I landed was maybe 14 inches long. In this lake, all bass are fair game. There is no special regulation to protect 12- to 20-inchers. Fast action with a fly rod is always fun. But I finished the evening feeling less than satisfied. Although I kept hoping I’d connect with a bigger bass, I never did. Instead, I pulled in an endless procession of 8-inchers.