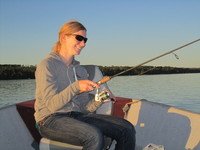 Some say fishing is just luck. My friend Kate Watson would agree, pointing out that all of hers is bad. Twice this summer the Grand Marais woman has gone fishing with yours truly. She has yet to catch a fish she could bring home to eat.

Actually, Kate’s been fishing three times, but one doesn’t count. She made a couple of casts in a commercial trout pond we visited during a writers’ trip to Canada this spring, promptly landing a chunky rainbow trout. But she didn’t consider the pellet-fed trout a “real” fish.

“It was like fishing at the zoo,” she said afterward.

A couple of days later, she had the opportunity to go after the real thing. We spent a morning fishing with a guide on the famed Nipigon River. Everyone but Kate caught a fish. This exasperated our poor guide, but not her. She thought fishing was fun and shrugged off being skunked.

I asked her if she wanted to try fishing again. Sure, she said, provided we didn’t have to contend with biting bugs, a fair request. We agreed to find time in our equally busy schedules to go fishing. We finally got out last week for an evening fish. Kate stopped by my office when she got off work, because she wanted to make sure we were still going fishing before heading to the sandwich shop for a couple of subs.

“I wasn’t going to buy you a free dinner if we weren’t going fishing,” she explained.

When she returned, we headed to the hardware store for a fishing license. She decided to get a full season license rather than a day permit, just in case she got another chance to go fishing. I took this as a positive sign.

Our destination was Devil Track Lake, where walleyes make up with reliability whatever they may lack in size. I figured jigging with live bait was a good starting point for a novice angler, because the cast and retrieve routine allows you to become proficient with spinning tackle. You also acquire the ability to concentrate, which is the foundation of all fishing.

Since Kate learned how to cast with a spinning rod on the Nipigon, wehad a brief refresher before moving on to bait. I had nightcrawlers and leeches. She was ok with the worms, but not the leeches.
Definitely not the leeches. I baited her hook with a worm. She made a cast while I readied my tackle. 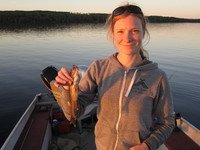 Up came a six-inch smallmouth bass. I showed her how to hold a bass by its lower bottom lip and snapped a picture so she had proof of her first fish. Then we let it go. I kept my superstitions to myself, but I worried that catching a fish on her first cast was bad juju. Kate, on the other hand, thought her luck was starting to improve.

We fished around some sunken humps where a friend and I had decent luck the previous week. We had plenty of bait-stealing nibbles from fish, but they were tough to hook. I caught a couple of runt bass and an equally tiny walleye. Kate didn’t connect with any of the tiny fish, but kept on fishing.

It was a warm evening. A light breeze died down as the sun dropped toward the island. While we waited for the walleye bite to begin, we told stories. Kate had seen a wolf earlier in the day while out for a run with her dog. They passed within 30 feet as the wolf trotted up someone’s rural driveway. I was a little surprised when Kate said she picked up a big stick and continued her run, stick in hand.

“I wasn’t afraid of the wolf,” she said. “But I didn’t want it coming after my dog.”

Finally, I caught a tiny walleye. Maybe, just maybe, the bite was about to begin. I explain that often the walleyes bite best at sunset. Kate kept fishing. Migrating nighthawks appeared in the dusky sky, flying crazy patterns as they pursued insects. I explained nighthawks aren’t really hawks, but are close relatives of whip-poor-wills and are among the first birds to head south. I caught another walleye, slightly larger than the first, but by no means a keeper. Then it happened.

It would be great to write that a lengthy battle then ensued, but the fish barely put a bend in her rod. Still, the 10-inch cigar Kate landed was her first walleye. I showed her how to grasp it by the gill covers and avoid the sharp spines on its dorsal fin. Unlike a bass, I explained, a walleye has a mouth filled with sharp teeth.

“What’s wrong with its eye?” she asked.

I explained walleyes are so named because they have large eyes adapted to low light conditions. That’s why they are most active early and late in the day or even at night.

The answer was yes. We took pictures of her with the fish, then she placed the walleye back into the water and watched it swim away. We kept fishing, but the keeper-sized walleyes eluded us. When Kate mentioned she was starting to be bothered by mosquitoes, I knew it was time to go. Back at the landing, unseen mallards were softly quacking in the twilight.

“I hoped we’d catch enough walleyes for a meal, but at least you caught a couple of fish this time,” I said.

“Baby steps,” she answered. “I just have bad luck, but fishing is really fun.”

It was good to hear her say that. If Kate can have fun fishing even when the fish aren’t biting, she may be an angler-in-the-making. After all, fishing’s just luck. And there’s always next time.