While ice out came early in southern Minnesota, up here in the North Woods, it’s still full-on winter. After a warm storm dumped rain and stirred Lake Superior into a wave crashing rage, an abrupt cold snap reminded us that winter was still here. Nighttime temperatures fell below zero and hovered in the single digits during the day. To make matters even more uncomfortable, the frigid temps were accompanied by an incessant wind.

Despite the winter cold, signs of spring are evident. Out with the dogs just after daybreak on the morning of the storm, I had a dozen snow geese pass overhead just above the trees. They were fighting wind, tossed in the sky like feathered confetti. It is uncommon to see snow geese here. Since everything is still firmly locked up in ice, I wondered where might be their destination. The next day I saw a drake mallard eating grass on the edge of the highway. That duck was either lost or optimistic.

For the creatures that live here year-round, it is the time of hard snow. We’ve received plenty of snow this winter, but the snow pack was soaked a couple of times by heavy rains. When the cold returned, the snowpack froze as hard as concrete. This means you can walk just about anywhere without the aid of snowshoes. The hard snow comes every year around this time, but usually it is a product of daytime melts and nighttime freezes, which means the frozen snow forms a crust over softer powder or sugar snow. If you break through the crust, the walking isn’t easy. This year, due to rain, the entire snowpack is frozen.

I’ve taken advantage of the conditions the same way I do every March by going for walks with my dogs. We’ve explored the North Woods near home, going places where we haven’t been since last fall. It’s impossible to know what is going on out there because not even the deer leave tracks in the hard pack. In open places, the afternoon sun is now strong enough to turn the surface of the ground to an icy sheen even when the temperature doesn’t rise above 20 degrees.

Last Saturday, we walked along an unplowed forest road that is used by snowmobilers, although most of the recent tracks were from ATVs. The route was rough and, where exposed to the sun, as icy as a skating rink. We walked about a mile and a half to a roadside trout lake. I intended to go a little further when I happened upon very fresh wolf tracks in a dusting of powder snow. We turned around and on the way back made a detour to explore a series of beaver ponds. We happened upon a few ancient moose tracks made before the snow was frozen, but none fresh. I suspect not even a moose would leave much of a track on the hard snow.

The walking was so good that I came up with a more ambitious hike for Sunday: a sojourn to the Gunflint Trail’s famed Stairway Portage to Rose Lake on the Canadian border. It’s a decent walk, maybe three miles one way, and scenic. The lakes along the way are good lake trout fisheries, but I had no desire to cut a hole and try to catch one. I wanted to stay on the move.

It was a great plan, but it didn’t come to fruition. On Sunday morning, my old Lab, Tanner, was stiff with arthritis from Saturday’s stroll. A long walk was out of the question. After an aspirin, he limbered up enough to go for a walk in the woods near home. Thinking the old guy would be ready for a nap when he returned home, I decided to take the young Lab, Rainy, for an afternoon ride-and-roam. When Tanner figured out what was going on, he gave me a look that made it absolutely clear he didn’t want to stay home. I loaded him into his kennel and we were off.

I decided to head up the Gunflint Trail for a change of scenery, cutting across backroads to get there. Doing so was an adventure, because what had been a snow-covered forest road was now a sheet of ice…with hills. Hitting the paved Gunflint was a relief. To make a long story short, I drove all the way to the end at Saganaga Lake. Driving back, I stopped to make a short hike with the dogs in through some country along the edge of the 2007 Ham Lake Fire. A half-inch of relatively fresh snow made it possible to see grouse tracks, lots of them, on a hillside dense with young birch and aspen. I made a mental note to return to this place in the fall.

Apparently, not everyone shares my enthusiasm for daylight savings, In the past week I’ve read news stories about efforts to bring an end to daylight savings time. Some folks don’t like having to change their clocks twice a year. Others think that setting back the sunrise for a few weeks in the spring creates traffic safety issues. Two states, Arizona and Hawaii, don’t participate in daylight savings. On the plus side, at least from a political point of view, daylight savings increases consumption, because people are more likely to leave their homes in the evening if it is light outside.

Personally, after three months of winter gloom and short-day darkness, springing forward with our clocks allows me to get outside and enjoy the lengthening daylight. It signals the end of the hibernation imposed upon me by an eight-hour work day. As the days grow longer, so does my time spent outside, walking the dogs, working in the yard, fishing or simply enjoying some fresh air. Perhaps if I lived at a warmer latitude, further south where they are less familiar with winter darkness, daylight savings would be less important to me. At this latitude, we only get so many daylight hours, so you might as well make the most of them. Once the sun sets, you can’t return to the daylight that got away. 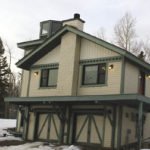 Building a Home with Sandwiches