Spring backpedaled into winter last week with a weather event that delivered three layers of precipitation to the North Shore. First came freezing rain that coated everything with a half inch or more of ice. This was followed by a couple of inches of ice pellets that formed a frozen crust over the ice. Topping it off was three inches of snow.

Weather like that places everything on pause. Schools close.  Folks stay home from work. And the spring bird migration comes to a grinding halt. I looked out the kitchen weather to see robins, juncos and fox sparrows scratching on the bare ground beneath my truck. It was one of the very few places not coated with ice. They were also scratching in the flower garden along the south wall of the house for the same reason.

Although I had already stopped feeding the birds to avoid attracting newly awakened bears, I filled the feeder with sunflower seeds. The birds needed something to eat. Shortly after doing so, the area around the feeder was a-flutter with activity. Grackles and blackbirds joined the juncos and sparrows, along with other species. Some were in the feeder, but most scratched for seeds on the ground. I was amazed how quickly the birds discovered the food source. Soon the ground beneath the feeder was pockmarked with places where scratching birds had broken through the frozen crust. This drew even more birds.

The feeder needed refilling just a few hours later. The birds were so eager to reach the sunflower seeds they were unconcerned when either I or the dogs were nearby. When we went for a walk, the only birds in the woods were beneath the balsams where they could reach bare ground. Robins were flying about, but their activity looked less like the rush of migration than a desperate attempt to find something to eat.

Driving to work the next morning, flocks of birds lined the shoulders of Highway 61. Even after the system passed through, the air temperature remained near freezing, so the accumulated snow and ice was slow to melt. The first places to thaw were roadside embankments, so the birds flocked there. For several days, these snow-free patches attracted all birds. While fishing last Saturday, I was struck by how many birds were flitting about the open ground along the stream bank. There was a constant procession of birds; a migration in miniature.

I came home one evening to find a dead robin lying on the doorstep. Perhaps it flew into a window and broke its neck. Or maybe it wasn’t able to find enough to eat. I felt a twinge of sadness when I picked it up and tossed it in the trash. For this bird, the migration journey had come to an inglorious end.

As the snow melted, the flocks began to disperse; no doubt carrying forward the migration. I can still step outside in the morning to a symphony of birdsongs, but the feathered orchestra is no longer clustered beneath my feeder. Anyone who is outside and aware bears witness the wondrous spring and fall bird migrations. But our natural inclination is to romanticize the event. We think of the passing birds as winging their way to some distant destination, perhaps with wistful envy of their freedom to do so.

It takes a storm to show us the reality of the migration from a bird’s point of view. The birds are not winging and singing their way northward from some sunny locale where they spent the winter. That’s what human snow birds do. Instead, the migration is a continuation of their daily existence, which is a never-ending struggle to find something to eat. There are no motels, truck stops or convenience stores along their migration route. Instead, they scratch for seeds and insects in unfamiliar places and roost in strange trees. They do this day after day for weeks, pushing northward on the heels of the retreating winter.

Along the way, they contend with fickle and fatal spring weather. They cross areas where their habitat is limited or nonexistent. And they contend with human obstacles and hazards: glass buildings, powerlines, highways, windfarms, artificial lights, house cats and so much more. It’s a wonder that any bird survives the passage.

Many perish, unseen to virtually everything other than the scavengers of small, dead birds. I don’t know how many small birds didn’t make it through last week’s ice and snow. They may have starved, been vulnerable to predators or been struck by passing traffic on the highway. All I really know is a dead robin was on my doorstep.

Large migrating birds were less visible during the storm. The day after, I saw small flocks of ducks of various species resting near shore on Lake Superior. Outside my office, a woodcock probed through the soggy snow where a shallow drainage crosses the lawn, one of the few places where its beak wasn’t blocked by a frozen crust. Two days after the storm, turkey vultures seemed to be everywhere along Highway 61. Perhaps they’d been delayed by the snow and ice and were again on the move. Maybe they were the clean-up crew. Vultures take their nourishment from those that do not survive.

Birds migrate because they cannot survive a northern winter. They return in spring to take advantage of the bounty of the land and waters during the growing season, breeding and rearing their young in midst of plenty. In summer, some species go through a molting period when they lose and replace their feathers, during which they may be unable to fly. This is the only time when their life is easy enough that they can risk being without their primary means of survival: the gift of flight.

Birds fascinate us with their beauty and behavior. Their cries and songs stir something deep within us. Their mere presence at a bird feeder in the dead of winter brings us cheer. With a few exceptions, we look at birds and think good thoughts. But we don’t think about what it is like to be a bird. Perhaps we should. 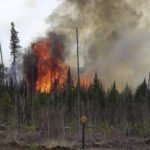 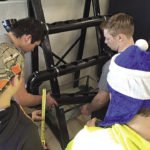 Aquaponics adventure in the classroom