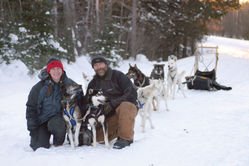 Some people like to get away from it all for a weekend. Brian and Dayna Gallagher are there all of the time. After living on the Gunflint Trail and spending a few years in Alaska, the couple moved to the North Shore woods north of Hovland and started building a dog team.

“We drove back from Alaska with two puppies and a pregnant female, explains Dayna. “In three years we had 21 dogs.”

While the Gallaghers had worked with dog teams owned by other mushers on the Gunflint and in Alaska, they wanted to start their own team from scratch so they could really get to know the dogs. And so they did, getting training assistance from a Montana-born sled dog named Red Man, a veteran of the famous Iditarod race.

“Red Man started us out,” Dayna says. “The first year was like having a bunch of five-year-old kids hooked to a team.”

“Now to see those same dogs as an experienced team and watch how they click can bring a tear to your eye,” says Brian.

The Gallaghers use their team to do tours on remote trails near their home. In order to provide their customers with a mushing experience in a wilderness setting, they stay off snowmobile trails and away from populated areas. They specialize in short rides ranging from 15 minutes to two hours and can customize a half-day trip. They do about eight to 10 rides per month.

“We enjoy touring and it helps pay the dog food bill,” Brian says. “But we want to stay small so we can enjoy our customers and not burn out.”

The couple enjoys teaching folks about mushing and sled dogs. They say many folks have misconceptions about working dogs and consider it cruel to hitch them to a sled. When watching a dog team in action, it is amply clear they love to pull and really enjoy the work.

For the Gallaghers, the term “working dog” is somewhat of a misnomer. They believe it is important to have a relationship with their dogs as pets, too. Some are even allowed to come into the house. The dogs also are allowed to run free on the Gallaghers’ property.

Although mushing is a winter activity, caring for sled dogs is a year-round job. During the summer, the Gallaghers rarely get opportunities to do things together, such as canoeing or going on a vacation. But they are satisfied with the mushing life. You might even say it is the tie that binds.

“Brian proposed to me on a dog sled,” Dayna says. 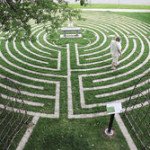